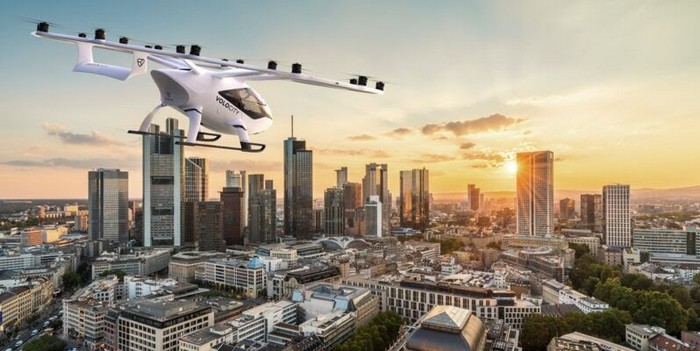 “Urban Blue” is the name of the new company unveiled on 26 October by four airports, including a leading French hub. Nice airport has joined forces with its counterparts in Rome, Venice and Bologna to speed up the development of vertiports, from their design to their management, including of course their construction. These home ports for eVTOLs – these electric vehicles with vertical take-off – will be deployed not only in the founding cities of Urban Blue, but also under other skies… Those in charge of the project are indeed opening the door ” to other geographical areas of interest “. Indeed, this Urban Aerial Mobility (UAM) can be more or less suitable depending on the urban fabric, the weather conditions and a flat or coastal environment constituting a favorable terrain.

From this point of view, Nice appears to be an ideal candidate, as the airport’s General Manager points out: “As an airport operator located in a landlocked area, between the sea and the mountains, in the heart of urban but also industrial areas, the Aéroports de la Côte d’Azur Group is anticipating the spread of this new form of mobility in the short term. This is why participating in the creation and development of Urban Blue is not only part of our strategy, but also of our convictions in terms of sustainable mobility,” points out Franck Goldnadel.

Take-off in 2024: “an ambitious but possible deadline

The founders of Urban Blue intend to move forward quickly on the vertiports file, since the start of operations in Rome, Nice and Venice is scheduled for 2024. This confidence is based in particular on the skills of the players involved in the master plan and management of infrastructures for commercial aviation and helicopters. In addition, their participation in various working groups related to urban air mobility (MAU) at Italian and European levels should give them the necessary expertise. Moreover, according to the information communicated on Tuesday, Urban Blue already has ” a portfolio of vertiport projects with high development potential, already identified in the specific geographical areas of reference “.

For the time being, as announced by those in charge of the project, ” Urban Blue will carry out technical and economic feasibility studies and develop master plans, in coordination with all the stakeholders of the new ecosystem, with a view to preparing the authorization phase and then the construction and management of the vertiports “.

” The development of Urban Air Mobility is part of our strategy of strong acceleration in innovation and sustainability and allows us to further improve the development and management skills of our infrastructures “, says Marco Troncone, General Manager of Aeroporti di Roma. We work in synergy with all stakeholders andindustrial partners for the design of the ground structures within the global ecosystem, with the aim of the operational start of this service in 2024, before the start of the Jubilee. An ambitious, but possible, timeframe that will allow Rome to be among the first cities in Europe to initiate this type of connection.

To carry out their project, the four airports intend to attract industrial, technological and financial partners in their wake. Among the links already forged are EDF Invest, a shareholder in the Aéroports de la Côte d’Azur, as well as Volocopter. The German manufacturer is also on all fronts, having just signed an agreement with Japan Airlines. The Japanese company has been selected by the local authorities to set up an air taxi service in Osaka for Expo 2025. JAL will use Volocopter’s eVTOL aircraft to link the World Expo site to the airport.

” Japan’s and Osaka’s commitment to the commercialization of urban air mobility and its open approach allows us to be involved as pioneers in the future of mobility,” said Florian Reuter, CEO of Volocopter. He adds: “As the world’s first and only eVTOL developer, with successful public flights on several continents and a multifunctional aircraft family, we are convinced that we will be an integral part of Japan’s future air mobility ecosystem. Together with our partners, we aim to improve life in densely populated areas through our sustainable air mobility services.”

Meanwhile, an agreement has been reached between Japan Airlines and Avolon to lease or purchase 50 VA-X4s, the aircraft produced by Vertical. ” Through this partnership, JAL will have the right to acquire or lease up to 50 eVTOL VA-X4s from Vertical to Avolon, with an option for an additional 50 units,” Avolon officials say.

Annemasse: the Wojo coworking centre relies on the Léman Express

Uber study: ‘Business meetings are back in business this fall 2021’