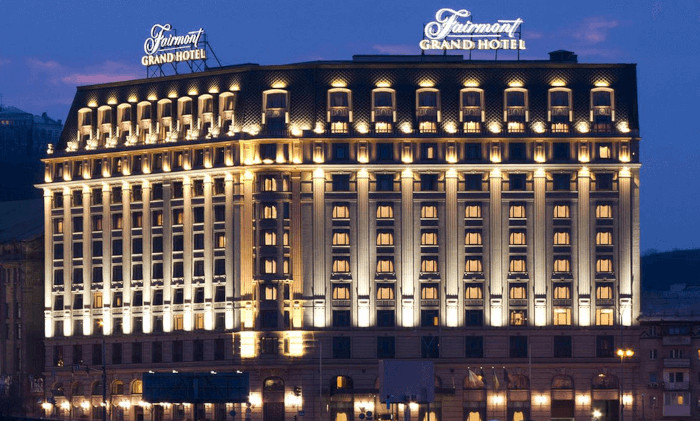 The Fairmont Grand Hotel in Kiev, one of seven Accor hotels in Ukraine.

“. On March 2, the largest Ukrainian hotel group, Reikartz Hotel, clearly showed its support for the Russian invasion. With some sixty hotels in Kiev and in about thirty cities in the country, the hotelier is suffering the full force of the war that is ravaging his country, having announced on February 25 the closure of many establishments, whether in Kiev, Kharkiv, Mariupol or Odessa.

Naturally, the major international groups have a much smaller presence in Ukraine, with Hyatt and Hilton only operating in Kiev, while IHG has five establishments there. Accor, on the other hand, has seven hotels – four of which are in the capital, including a luxurious Fairmont – some of which keep their doors open to welcome journalists, NGOs or families who wish to take refuge there. A surge of solidarity that also concerns the reception of refugees outside Ukraine, Hilton announcing for example a donation of up to one million nights across Europe, in partnership with American Express and #hospitalityhelps.

Similarly, Accor, Hyatt, IHG or Radisson are opening their establishments to refugees in Ukraine’s neighboring countries. On March 4, Accor stated in a status report that many hotels had volunteered to host refugees, not only in Lublin, Krakow, Nowy Sacz, Raclawice and Warsaw, but also in Bucharest, Timisoara and Galati in Romania, Chisinau in Moldova and Budapest in Hungary, as well as in Western Europe, notably in Paris and Genoa. ” A list that has since been extended to meet new needs,” says the French group’s communications department. For the occasion, Accor has also reactivated the CEDA platform

See also  Ryanair positions itself in Bordeaux and Marseille

, created during the pandemic to organize accommodation for homeless people and health professionals.

This surge of solidarity is materialized by financial support from hotel groups. Marriott, for example, has allocated one million dollars to its aid fund to support its employees while at the same time inviting members of the Marriott Bonvoy program to donate points to support UNICEF and World Central Kitchen. For its part, Accor has mobilized its ALL Heartist fund, a financial vehicle for solidarity, to support its employees and their families affected by these tragic events, while at the same time proposing that its employees make donations to the UNHCR, which the group will match.

s last few weeks. Note that another hospitality player, Airbnb, has announced it is offering free temporary emergency accommodation to up to 100,000 refugees from Ukraine. But the platform has found another form of use, as thousands of Internet users have hijacked it as a way to send donations to the local population, booking stays without actually honoring them.

Support in Ukraine, suspension in Russia

There is another aspect of the crisis, and not the least, the position of hotel groups vis-à-vis Russia. Indeed, unlike many multinationals such as McDonald’s, which decided to temporarily close its 850 restaurants in Russia, none of the leaders of the global hotel industry has ceased its activities there completely. ” It is not in the group’s DNA to leave a country in a difficult situation,” explains Accor’s communications department, Burma being another example of this policy. This position is shared by other groups, including Radisson Hotel: ” All our properties in Russia are owned by third parties and we continue to operate them in one way or another, because we play a key role in supporting our employees and local communities.

On the other hand, whether it’s Hilton, Hyatt IHG, Marriott or Radisson, all have decided to close their offices in Moscow, and more importantly, suspend their investments and development activities in Russia. Accor, without communicating officially like its American counterparts, emphasizes that it has taken the decision to stop its development in Russia since the beginning of the conflict, but also to suspend its partnerships in the framework of the All loyalty program. In addition, owners under European and American sanctions have had their establishments removed from the booking platform. ” We remain vigilant and updates on these sanctions will be passed onas we go along,” the French group says. “As this complex situation develops, we will continue to evaluate our existing management agreements with third-party entities that own Hyatt hotels in Russia, while complying with applicable sanctions and U.S. government guidelines,” Hyatt Group also says. As for potential revenues from its presence in Russia, Hilton has made a clear decision to donate all profits from its business operations to humanitarian aid efforts in Ukraine.

The InterCity Hotels brand is banking on Swiss airports