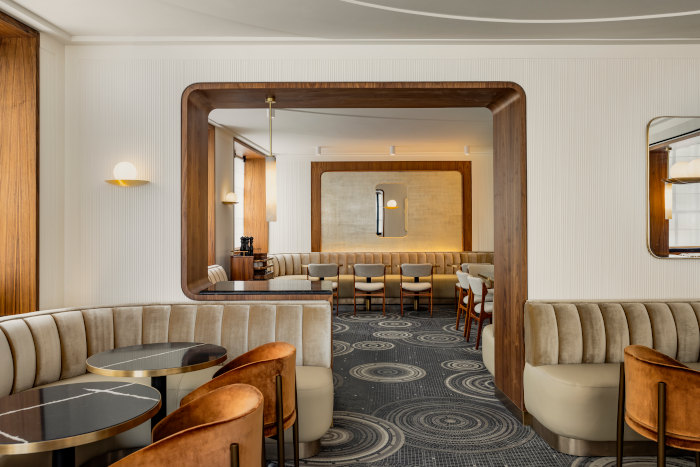 After the Place des Vosges, with the hotel Le Pavillon de la Reine, and then the area around the Elysée Palace with Le Pavillon des Lettres, the Chevalier family group is preparing to conquer a new mecca of Parisian chic with a German-Pratine address. Expected to open on April 12 at the corner of Rue de l’Université and Rue du Pré-aux-Clercs, the opening of the Pavillon Faubourg Saint-Germain is part of the transformation of three 19th-century buildings that embody the cultural spirit of the neighborhood, whose walls have housed tenants such as Léo Ferré, T.S. Elliot, and James Joyce, the latter of whom completed Ulysses

, his most important work. The walls have now been revisited by architect Vincent Bastie and interior designer Didier Benderli for a three-in-one building full of charm.

Each of the buildings has kept its own entrance with, at number 1, the restaurant whose name echoes James Joyce’s Dubliners

. Called Les Parisiens, this 55-cover table with a modernized brasserie decor is led by one of the players in Parisian haute bistronomy, Thibault Sombardier, a former finalist in the 2014 Top Chef show. With its entrance at number 3, the hotel’s bar also evokes the most famous of Irish writers. Appropriately named James Joyce, the casual place intends to break away from the entre-soi of hotel bars by opening up to the neighborhood clientele, with a proposal of signature cocktails, tapas but also beer on tap.

And finally, the hotel, whose old porte cochere at number 5 serves as a masterly entrance. ” As in the most beautiful houses, I worked on the scale of intimacy, and as in the best hotels I sought to make the exceptional everyday

“, described Didier Benderli. Design pieces, custom-designed furniture, contemporary works of art: the whole declines an atmosphere that is both luxurious and current.

See also  Aria's Sky Suites are the top rated of Vegas luxurious, but are they truly worth the steep cost? - The Points Dude

In addition to a spa in the basement, the Pavillon Faubourg Saint-Germain offers 47 rooms and suites. Hungarian point parquet and moldings, contemporary furniture and design accessories: each one embodies the chic of the apartments of the beautiful Parisian districts and goes from 20m2 for the classic category to 70m2 for the signature suite in homage to… James Joyce. Naturally. In addition, hotel residents and visiting guests will find two lounges connected to the lobby – the library for informal gatherings and the light-filled salon verrière – that can be used for corporate events.

With this new house, Chevalier Paris completes its offer of five-star establishments with character, which also saw the acquisition, in 2012, of the Hôtel du Petit Moulin, designed by Christian Lacroix in the Marais. In this very Parisian neighborhood, another charming hotel will appear in the fall, combining classicism with French style.

Sketch of the bar at Le Grand Mazarin

” This will be the first urban hotel in our collection to embody our DNA (editor’s note: the other hotels are Le Coucou in Méribel, Lou Pinet in Saint-Tropez and Crillon Le Brave in Provence), the Maisons Pariente spirit of simple, warm luxury hotels, with sincere and generous service excellence

,” said Leslie Kouhana and Kimberley Cohen, president and co-founder of Maisons Pariente respectively. It will also be an opportunity for renowned Swedish interior designer Martin Brudnizki and his London-based Design Studio to showcase his talent in Paris.

” I love the concept of the literary salon of yesteryear, and the ‘salonniers’ were one of the main sources of inspiration for the design of the Grand Mazarin,” said Martin Brudnizki. The Grand Mazarin is intended to be a true living space inspired by the great houses of the aristocratic era, with a decor that is announced as ” grandiose, whimsical and delightfully warm. ” The hotel will have a restaurant, a bar, a pool – a rarity in the Marais district – and 61 rooms, including 11 suites. Opening expected in October.

Iberia: more and more destinations to the American continent

Airline : down with the masks