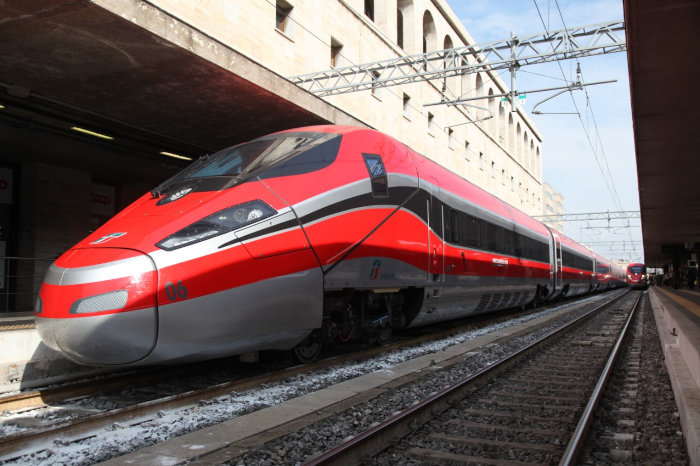 Trenitalia will start its Paris-Milan via Lyon-Part Dieu services on 18 December.

With just a few days to go before the launch of its Paris-Milan via Lyon services on 18 December, Trenitalia is finally unveiling its commercial offer. As announced

, two daily round trips will be operated by its high-speed Frecciarossa trains (red arrow) from Saturday between Paris and Milan with stops at Lyon Part-Dieu, Chambéry and Modane stations in France and Turin Porta Susa in Italy. Departures are scheduled from Paris-Lyon at 7.26am and 3.18pm and from Milano Centrale at 6.25am and 3.53pm. If traffic is satisfactory, three other frequencies should be added during the first half of 2022.

Faced with the arrival of this competitor and its two daily rotations, the SNCF is – for the time being – playing it cool

, highlighting the volume of its daily offer with 22 return trips on the Inoui TGV, plus 2 to 3 low-cost Ouigo TGVs. And this, while waiting for the launch in spring 2022 of its very low cost offer called Ouigo Vitesse Classique between Paris Bercy and Lyon Perrache stations.

marketing of Frecciarossa is starting today on the Trenitalia.com website as well as in its shops in the Paris-Lyon and Lyon Part-Dieu stations. The launch of an in-house application will complement direct sales, while travel agencies will be able to start distributing tickets on 18 December. The Oui.sncf website will obviously not offer the sale of Trenitalia tickets, which is coming to run on its very lucrative Paris-Lyon route as part of the opening up of rail competition in Europe. All the more so as the Italian company is starting its operations with aggressive fares in order to quickly conquer market share.

See also  Hilton revisits a former warehouse in Porto, on the banks of the Douro

A seat in Standard class, the equivalent of a 2nd class seat on the SNCF, is offered from €23 on the Paris-Lyon route and €29 to Milan. For business travel in Business class, which is equivalent to 1st class, it will cost a minimum of €29 for Paris-Lyon and €36 for Paris-Milan. With the possibility of travelling in a “Silenzio” car to work in complete tranquillity, the comfort of wide leather seats (69 cm) that can be reclined up to 109° and the service of a snack including a hot or cold drink and a salted or sweet snack 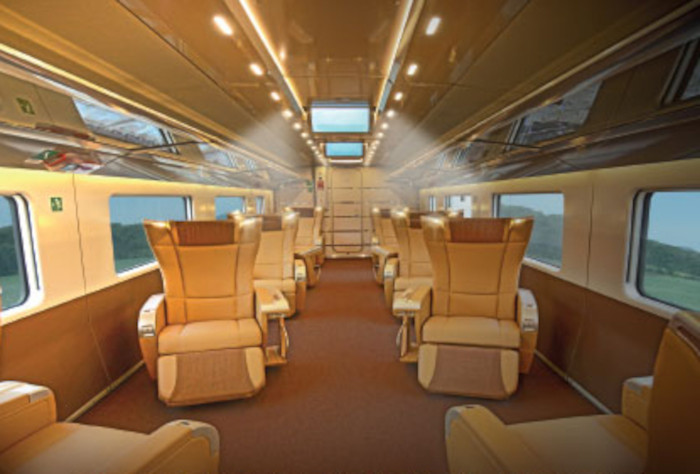 But Trenitalia could above all make the difference with high-paying business customers with its Executive class with a cosy atmosphere, equipped with only 10 seats. Spaced out and swivelling, with a width of 74 cm, they will allow passengers to enjoy a meal served at the seat and snacks concocted by the Italian chef Carlo Cracco. The price for this service is €139 for the journey to the capital of France and €165 for the entire journey. Finally, each train will be equipped with the Sala Meeting, a meeting room for 2 to 5 people that Trenitalia markets on Paris-Lyon, Paris-Chambéry and Paris-Modane. Fares start at €113 per person for two people, with a sliding scale of charges for more (€75 for 5 people).

meal served at your seat with EasyBistro

Focusing more than ever on on-board service, the Italian airline will be offering a high-speed Internet connection in all three classes, along with a travel portal to access the press, games, music and practical information. The EasyBistrot tab will also allow passengers to order food and beverages from the bar before being served at their seat. Unless the passenger opts to buy from the vendor whose food trolley travels around the train during the journey.

This is a way of

Dynamic development for Ascott and Adagio in 2022 and 2021

Muscle tension: How to relieve it?