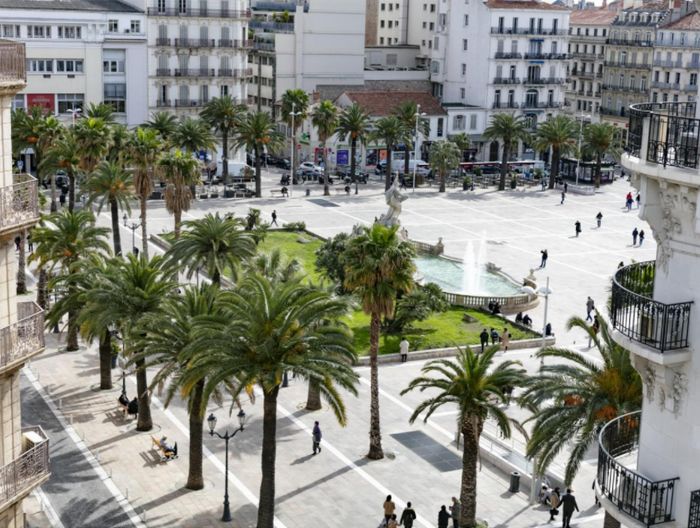 The emergence of new poles of attractiveness in Toulon is timely in the post-crisis context. With the experience of teleworking, many employees have discovered that they can be just as efficient without necessarily living in the Paris region. The decentralisation that could ensue would benefit many medium-sized cities. And Toulon, directly linked by TGV to the Gare de Lyon in Paris, clearly has a card to play. A card that is all the more strategic since new infrastructures are flourishing right next to the TGV station.

In France, when you want to reach a critical size and work with major accounts, you have to be in Paris a lot: I go up there every week,” says Jean Larroumets, president and founder of the company Egerie. When you’re in the centre of Toulon, as we chose to do with Chalucet, it’s much easier. Toulon has all the facilities of a large metropolis in a city of accessible size. The journey takes four hours, or half a day, during which you can easily continue to work and be efficient. You don’t lose any time. We go up to Paris for two or three days, it’s less of a burden than living there. And when our teams from Paris come to Toulon, it’s a real breath of fresh air for them.

We stay here, our identity is in Toulon

Moreover, the dependence of company directors on a Parisian domicile could well be reduced. This is in any case the will of Jean Larroumets, who intends to assume this regional identity: ” Until recently, we could suffer a certain pressure from investment funds that did not want to support a company if it was not located in Paris. Before, we would have been stuck, forced to accept this logic and move. But sometimes you have to pound your fist on the table and say: “No, we’re staying here, our identity is in Toulon”. We manage to recruit, including in my sector where resources are very tight: developers and cyber experts. Once we’ve managed to bring them in, they don’t leave. As an entrepreneur, I want to succeed in the regions. It seems important to me, there is a lot of energy, and we must also show that there can be great entrepreneurial stories elsewhere than in Paris, including in the digital sector.

The teleworking asset has not escaped the attention of departmental officials, who last May launched an “operation teleworking” embodied by the slogan: “The Var, the head in the office, the feet on holiday”. It is Var Tourism, the tourist development agency, which initiated this approach aiming at “encouraging workers to come and fully enjoy the Var destination”. In conjunction with the department’s various tourist offices, Var Tourisme has therefore referenced on <a href=”http://www.visitvar.fr/teletravail-var” target=”_blank” rel=”noopener”>a page dedicated to all the actors of the territory related to telework, in particular to direct them towards accommodation solutions adapted to their needs, and coworking spaces. ” The crisis will obviously reinvent our travel habits in the years to come. To this end, Var Tourisme wishes to adapt today and propose an offer adapted to the needs of workers/tourists“, say those in charge of the operation.

OAG: a moderate recovery in air travel is confirmed worldwide