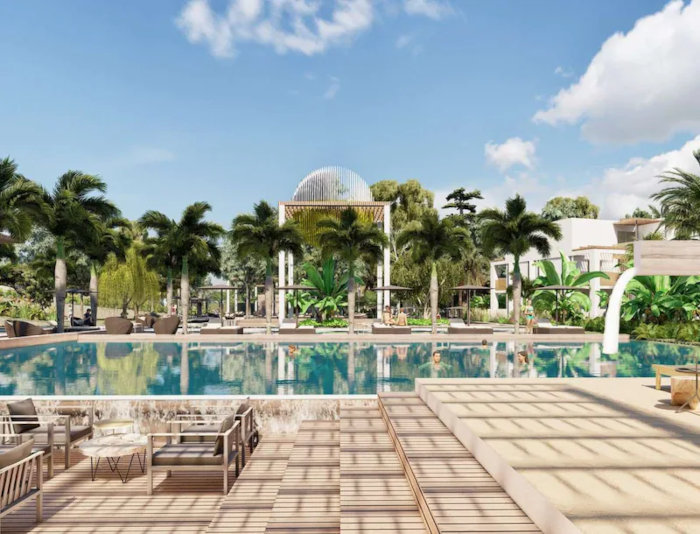 Among the five new hotels announced in Africa is the future Radisson Resort Dakar Saly in Senegal.

The Radisson Hotel Group is accelerating its growth in Africa with the announcement of five new hotels since the beginning of the year. Already well established on the continent – among its latest developments, the opening of a Radisson Red in Johannesburg, a triple inauguration in Madagascar and the appearance of the luxurious Radisson Collection in Bamako – the hotel group is building on the momentum of 2021. A year that saw a record number of signatures – 14 -, foreshadowing the establishment of new hotels in Djibouti, Ghana and Zambia, but also in Morocco, a country where the group is in the process of building a network of some 15 hotels with the expected opening in 2023 of the Radisson Casablanca Gauthier La Citadelle and recent developments of resorts

in Hoceima and Taghazout.

Africa remains a priority for us,” said Elie Younes, executive vice president and global development director of Radisson Hotel Group. In 2022, we aim to add a dozen hotels to our portfolio across the continent, surpassing the 100-hotel mark in operation and development with a goal of 150 hotels by 2025.

South Sudan, Djibouti, the shores of Victoria Falls: several properties are on the agenda for the year. And, among the recently announced signings, several establishments will also open their doors in 2022 with, in the second quarter, the arrival of a new member of the Radisson Individuals brand: the Number One Oxford Street Hotel & Suites in Accra, Ghana. Located in the Osu district, near government ministries and the financial district, the hotel will offer 108 guest rooms and suites, including some apartments with a residential component, including a three-bedroom penthouse and a presidential suite.

Also in the second quarter of this year, the group will add a hotel in Tunisia in Sfax, the country’s main trading port. Located in the city center and near the port, the Radisson Hotel Sfax will be the first internationally branded hotel offered in Sfax. With 88 rooms and suites, the hotel will cater to corporate and local government clients as well as MICE clients with a meeting space for up to 30 people.

Tunis is also on the development agenda, as the Radisson Individuals brand, dedicated to the affiliation of independent hotels, will welcome La Maison Blanche among its members in January 2023. Located in the city center, in the business district of the Tunisian capital and just a few steps from the medina, the hotel is currently being renovated and until now has offered 48 junior suites and a flexible meeting room that can accommodate up to 190 people.

Developments in the heart of the business districts

The summer of 2023 should see the opening of a Radisson hotel in Addis Ababa, in the new Bole business district. Not far from the international airport, the hotel will be adjacent to the new national stadium, both of which are currently under construction. Finally, the last of the announced hotels, a Radisson resort will be built in 2024 in the seaside resort of Saly, Senegal. A popular tourist destination with easy access to Blaise Diagne International Airport and Diamniadio, but also to downtown Dakar via a brand new highway.

See also  Stuttgart 21: the project of the century will transform the business destination

Cytric goes into Easy mode with Amadeus and Microsoft

London: a “premium fare” in the metro to reach Heathrow?