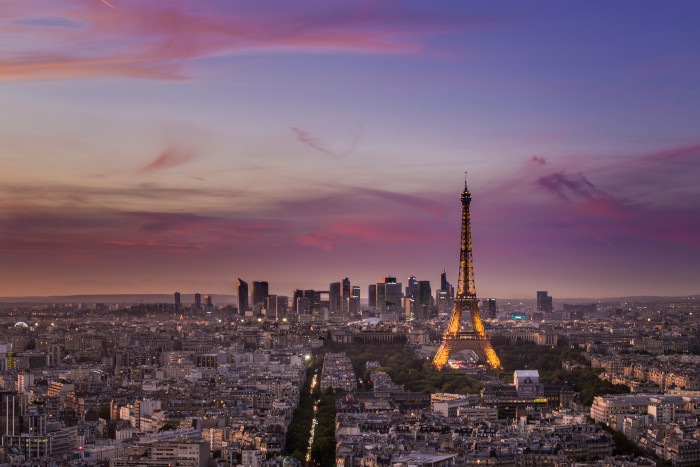 View from the rooftop of the Pullman Paris Montparnasse hotel. (c) Stéphane Michaux

Long-haul travel still at half-mast and business travel at a moderato tempo: for its return to business, the Pullman Paris Montparnasse would no doubt have been satisfied with a more favorable context. However, the management of this 900-room hotel, which caters to international customers and corporate events, does not seem to be complaining about its MICE business. ” Since the reopening on December 27, we have already hosted more than 90 events, from board meetings and product launches to gala dinners and trophy presentations, or even the reception of athletes returning from the Beijing Winter Olympics

” While the beginning of the year was turbulent with events cancelled or postponed, we are seeing a dynamic trend in the second quarter, which is traditionally strong for our sector,” notes Jérôme Cherpin, the hotel’s general manager. While the Asian clientele is still absent, the hotel is recording strong demand from the French and North American markets for the coming months. ” For example, we only have one week left to sell in September, as the other three have already been booked

On the other hand, while until now, the events hosted have ranged from 50 to 100 rooms, the establishment expects a progressive increase in the number of participants. ” We have a very nice event coming from the United States in May and another one on the French market in June, both around 300 to 400 rooms. And from September onwards, we will be able to accommodate more than 400 people 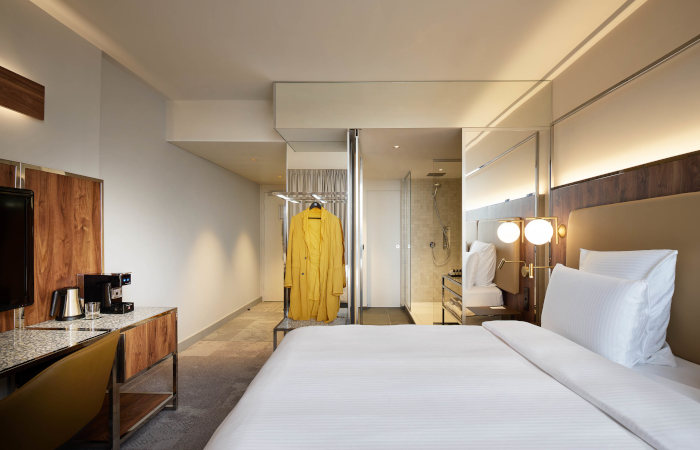 . More than a renovation, a complete transformation, almost the opening of a new hotel, entirely redesigned by the agency CUT. Everything has changed, except for the number of keys, set as before at 957 rooms. And yet. This stability hides an underlying change, with two-thirds of the rooms in the Deluxe category instead of Standard, symbolizing a “premiumization” of the offer.

has rethought its positioning. Previously focused on Franco-French corporate events, the hotel is now turning to large international conventions, which are expected to account for more than half of its event business. ” We are no longer competing on a Parisian scale, but with other MICE destinations

,” confirms Jérôme Cherpin. To establish itself as an international benchmark, the Pullman Paris Montparnasse has been inspired in its transformation by the large aircraft in Dubai and the United States, which offer customers a high-end experience in the heart of Paris. 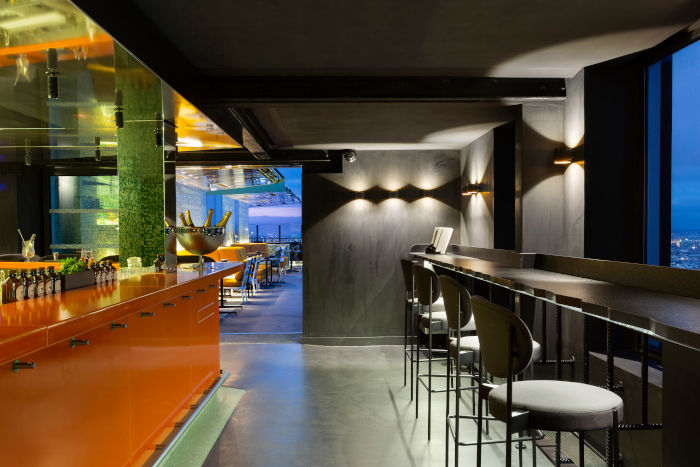 To revitalize the F&B offer, the hotel has, for example, sought out concepts originally developed by the American group SBE, one of Accor’s main acquisitions in the lifestyle segment

. These include Umami, a high-end burger restaurant, and Fil’ia, an authentic and modern Italian restaurant that will open in the spring. But above all, from the top of its 32 floors, the Pullman Montparnasse is distinguished by the highest rooftop bar in the capital, at 115 m high, mixing indoor and outdoor spaces. Open in the evening, it is also based on the Skybar concept launched by SBE in Miami and Los Angeles, with Asian fusion cuisine, original cocktails and a musical identity designed by DJ Fred Viktor.

This will give event participants the opportunity to extend their stay or bring forward their arrival date. The hotel, which will also offer a spa starting next year, is above all designed to host major corporate meetings. The hotel’s customer flow has been designed to accommodate groups seamlessly, with three reception areas: the hotel entrance for MICE and leisure groups, the lobby on the second floor for the main reception area, and a new area on the second floor for members of the ALL Elite program

and suite guests, as well as for VIP event participants. 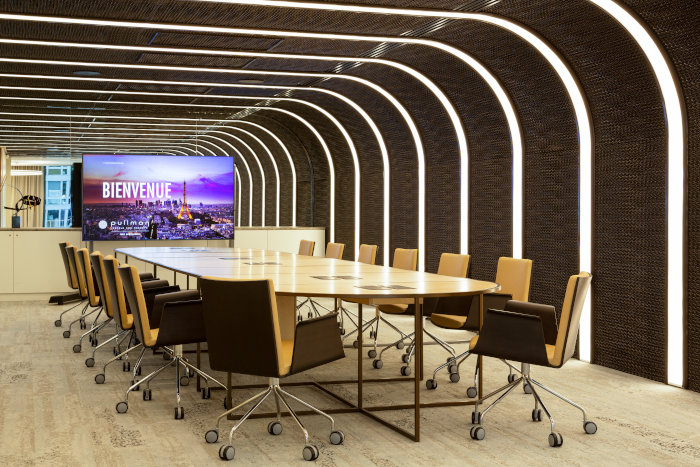 As for the meeting rooms, here too, everything changed with the hotel’s transformation. Before, they were located on the first floor, without daylight,” says Leïla Salhi. The space has been enhanced with three floors dedicated to events.

Center. The Event Center – so called because the venue is not just for conferences, but for all types of events such as fashion shows or concerts – offers a multitude of options to organizers between its studios on the 3rd floor and the Green Rooms on the 4th floor. While the name of these rooms reflects the hotel’s strong commitment to CSR, they also feature a green environment, with an 800 m2 terrace laid out as an urban garden, ideal for relaxing between meetings.

But the highlight of the Pullman Paris Montparnasse’s event offering is undoubtedly its 742 m2 Grand Ballroom with an 8m high ceiling. With a capacity of up to 735 people in its entirety, but also modular in several rooms, it is “our main asset, a place that has few equivalents in Paris 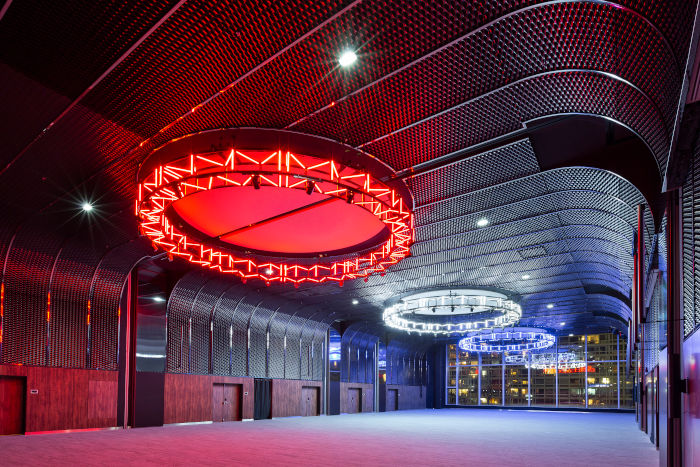 A ballroom equipped with the latest technology ©Arnaud Laplanche

Although the hotel’s MICE dimension is already substantial, it is not yet fully complete, since a new 1500 m2 space will be marketed from next September. Designed in partnership with the Canadian agency C2, which specializes in immersive events and content creation, this “playful” and modular space will have a street entrance. Divided into three zones, the space will be able to host creative workshops, product launches, gala dinners and team building events, and can also be used as a plenary room for large conventions. Finally, and still in September, the Pullman Paris Montparnasse will also start marketing the large meeting rooms of the neighboring Wojo

coworking center, which is currently being completed.

The establishment is also part of a larger project, that of the Ateliers Gaîté. This is the revitalization of the neighborhood adjacent to the TGV station, which is being carried out by Unibal Rodamco for an investment of 470 million euros. ” This is one of the three most important projects in Paris in the last 20 years, along with Chatelet-Les Halles and the Samaritaine

,” emphasizes Jérôme Cherpin. The redesigned district will include a hotel and a Wojo coworking space with more than 1,000 workstations, as well as a library, a new shopping center with some 60 stores and, finally, a food hall managed by the Moma Group, announced as the largest in Europe with more than 25 restaurants. A place connected to the hotel that can be privatized for more than 1200 people.

Welkin and Meraki sets up in La Défense: interview with Alain Brossé, CEO