The long-stay hotel industry continues to grow across the Atlantic 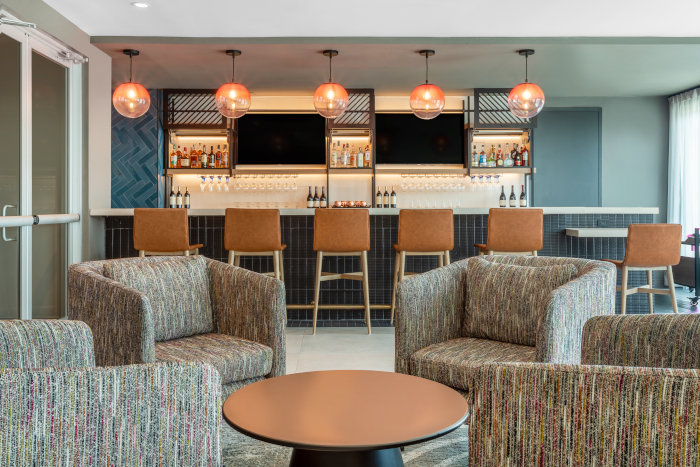 IHG unveiled the first property in Miami under its Atwell Suites extended-stay brand.

With the unveiling of IHG’s first Atwell Suites aparthotel in Miami, the launch of new extended-stay brands at Wyndham and Choice Hotels, and the accelerated development of Hyatt Houses from Houston to Kansas City, as well as Orlando and Sacramento airports, the extended-stay hotel industry in the U.S. is gaining momentum.

The United States is a pioneer in this type of accommodation, which is halfway between the traditional hotel industry and apartment rentals. For many years, the United States has been a major player in the extended-stay market, with this segment accounting for nearly 10% of the hotel industry’s supply, compared to less than 5% in the main European countries. However, the projects underway within hotel groups still show that there is real room for growth in the residential segment.

Choice Hotels noted that its long-stay brands had signed a hundred franchise agreements last year, a quarter of all those signed by the American franchisor. ” Our continued success in the extended stay market, even in uncertain conditions, shows that our strategic investment in this segment is paying off and is a testament to the strength and resilience of our brands

This investment was marked by the integration of the WoodSpring Suites brand into its portfolio four years ago, by the continued growth of MainStay Suites, and by two recent developments. In mid-March, Choice Hotels announced the refresh of its Suburban Extended Stay brand, renamed Suburban Studios, and the unveiling of its new Everhome Suites brand in Atlanta next spring.

Unveiled in 2020, this mid-range brand is based on a “work & play” environment, such as with a rolling, ergonomic work table in apartments with fully equipped kitchens and lobbies that allow for both relaxation and the pursuit of business. The brand has 30 locations in its pipeline, with another expected this summer on the outskirts of Los Angeles.

brand, which just opened in Miami’s Brickell neighborhood, has 22 more projects across the Atlantic. The new IHG brand aims to appeal to travelers with its concept of contemporary suites with a living room and work area and, on the amenity side, a microwave oven and small refrigerator.

Its offer, more adapted to the trend

The hotel, which is only suitable for very long stays, is complemented by a large lobby with a bar and a coworking space. Residents will also enjoy a complimentary breakfast and a vending machine where they can help themselves to espressos and lattes or still and sparkling water at any time of day. “This offering was created to be a stylish, design-oriented brand, a proposition that was still missing within this growing all-suites segment

brand is also contemporary, but more focused on long stays with kitchens with extensive facilities. It expects to open no less than 20 hotels in the United States in the next two years, some of which will be combined with Hyatt Place, the American group’s contemporary, low-cost brand.

Auburn, Bryan, Minneapolis, Sacramento, West Chester north of Cincinnati: this development plan is a testament to both the diversity of possible locations and the demand for an extended-stay brand.

From downtowns to airports, from leisure destinations to mixed-use projects and even college campuses, these new properties demonstrate the strength and resonance of the Hyatt Place and Hyatt House brands with operators and guests 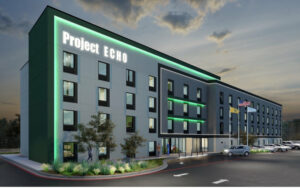 This diversity of opportunities is also evident in the way the company is attacking the extended-stay market. For example, Wyndham intends to position itself in the economy segment with its Project ECHO – an acronym for EConomy Hotel Opportunity. Over the past two years, extended-stay economy hotels have outperformed all other segments with new records for occupancy and revenue per room in 2021,” said Geoff Ballotti, CEO of Wyndham Hotels & Resorts. Demand for these accommodations is only continuing to climb, both from guests and developers.

Adding to the more upscale Hawthorn Suites by Wyndham, this project completes the group’s offering with facilities consisting of one- and two-bedroom studios with kitchenettes and common areas with a limited number of amenities. The prototype of this ECHO project, with 124 rooms, has been presented and has already attracted two initial partners, Sandpiper Hospitality and Gulf Coast Hotel Management, who will each develop 25 establishments, with the first opening expected in 2023.

As for the future, Wyndham is aiming for the 300-hotel mark in the U.S. within ten years, with potential for international growth as well.

See also  The recovery is confirmed for the major hotel groups

OAG: a moderate recovery in air travel is confirmed worldwide