The lights are back on for Trainline 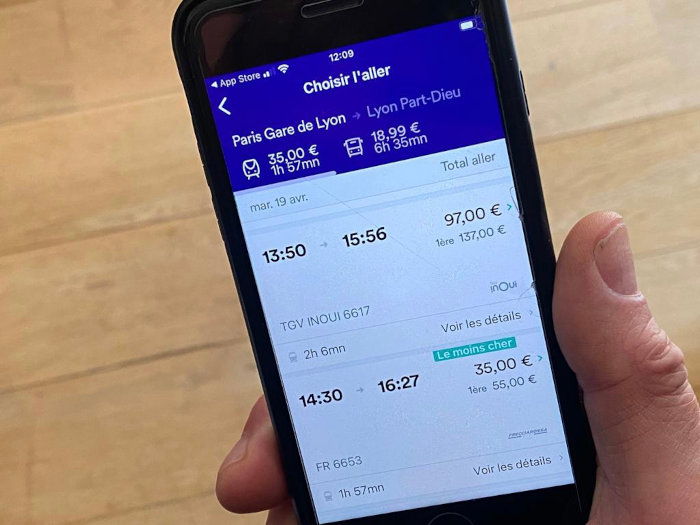 Application of the Trainline reservation platform.

At the end of January, the failed launch of the SNCF Connect application clearly did the business of its challenger, Trainline. In the three weeks following this laborious switchover, the independent reservation platform recorded a sharp increase in the number of its customers and 50% growth in its sales of Inoui and Ouigo TGV tickets. Now present in 45 countries, the former start-up Captain Train, acquired in 2016 by its British counterpart,

has come a long way since then, offering sales of 80 rail companies and 190 bus lines, all in 14 languages. This has enabled it to reach an annual turnover of €3 billion – of which €2.5 billion was generated in the UK – in its last financial year, which ended at the end of February.

Still impacted by the turmoil of the Covid pandemic in its various markets, this result represents a return to 90% of the pre-pandemic activity for the leisure market, but only 30% for the “pro” market. ” However, the business segment has picked up since the beginning of 2022, driven by the fact that companies are looking for efficient and operational solutions for booking trains, a mode of transport that was very popular in Europe after the health crisis

Since 2015, the distributor has been offering its Trainline for Business tool to its corporate customers, from large accounts to small companies, including independent firms, public administrations and associations… However, no precise figures have been released for the French market. ” The tool is deployed directly by our teams or via TMCs and travel agencies to serve their corporate customers,” he says. In the latter cases, Trainline uses an API

The tool is customizable by incorporating different elements such as travel policy, validation levels, centralized payment, sending information during the trip … And Christopher Michau adds: ” The goal is to make the travel experience as pleasant as possible. Among the latest features developed, we should note Seat Map, which allows you to choose your seat on most TGVs, but also ID Search, to find out everything about your train by typing its number in the application, or Departure Board, to optimize your connections.

Revealing the ecological advantages of trains over planes

Trainline is also playing the “green” travel card, which is now very popular with companies, by displaying the carbon footprint for each journey searched for on the site. ” This service is going to be improved, because companies want to have the total annual carbon emissions corresponding to all of their employees’ train journeys,” explains Christopher Michau. A dedicated marketing campaign and a strengthening of the corporate sales force are also expected this year to support the growing interest in business customers. In 2021, Trainline published a study confirming the ecological advantage of the train over the plane. It stated that “depending on the journey, the carbon footprint can be 124 to 151 times lower when travelling by train than by plane“.

In addition to the ergonomics of its application, Trainline’s strength lies in its exhaustive “unbiased” offer of rail operators to compare schedules, availability and fares. The booking platform is taking advantage of the opening of the French and European railways to competition by distributing SNCF, Deutsche Bahn, Trenitalia, Italo and Renfe, as well as Renfe’s low-cost Avlo trains and SNCF’s Ouigo Spain TGVs. ” Trainline finds the best available fare on a common route. And it allows you to create customized itineraries, or even to mix several carriers. On a Lille-Lyon trip with a station change in Paris, the SNCF could be offered on the first leg and Trenitalia on the second. Or, on a Paris-Lyon return trip, it is possible to book an outbound trip with one and a return trip with the other, depending on the prices displayed,” says the manager.

The arrival of Trenitalia in France has already tripled Trainline’s overall sales on the Paris-Milan route. And the rise in power of the Italian company, which will operate 5 round trips per day between Paris and Lyon on June 1, will further accentuate its breakthrough in sales in France. ” In Italy and Spain, which have opened their markets, we have seen the benefits of this competition, generating lower ticket prices and increased traffic. It’s a win-win situation for the consumer,” says Christopher Michau. And he concludes: ” We hope to see the creation of other businessesin the future.This is the case even though several projects are behind schedule, such as Railcoop and Le Train on the Atlantic axis, which have been postponed to 2023. The Spanish company Renfe, which has opened an office in the capital, could also compete with Eurostar on the Paris-London route. A craze for the railroad guarantees future sales on Thetrainline.com.

Mim Baqueira invites you to escape

Airbnb, the farewell to China