since August 2018, will have been the gravedigger of the Australian tourism industry since the beginning of the pandemic. A paradox for a man who, one would tend to forget, was Chief Executive of Tourism Australia, the country’s national tourism agency, from 2004 to 2006. Since March 2020, Australia has been almost hermetically sealed off to all visitors from outside – including its own nationals.

This strategy has certainly enabled Australia to control the numbers of the covid pandemic better than elsewhere. As of September 30, the number of Covid-positive cases was 107, 128 and the number of deaths 1,309. A very low ratio indeed for this country of 26 million inhabitants. But at the same time, the number of people who have not been able to find their families or accompany a dying person has increased.

Because, despite the good results on the control of the pandemic, the Australian government has not ceased to postpone a potential reopening of the country, always invoking the risks incurred in the health situation.

The agony of the “Zero Covid” theory

An attitude that is now facing a greater skepticism of the population. In fact, the Morrison government has now reached the limit of its “Zero Covid” strategy, especially since it has been very slow to implement its vaccination campaign. As of September 30, 44% of Australians had received their two doses of vaccine. A percentage still far from the collective immunity of 80% advocated by Scott Morrison to authorize travelers.

Also in September, the country fell into an internal political crisis. The seven states (+ the federal territory of Canberra), which form the Commonwealth of Australia, closed their intra-state borders in the face of the rebound of the pandemic.

Because strategies now diverge from one state to another. New South Wales (Sydney) and Victoria (Melbourne), for example, have abandoned the “zero-covid” theory. They consider it impossible to achieve and have been ostracized by the other Commonwealth states. On the other hand, the State of Western Australia (capital Perth) wants to stick to “Zero Covid”, as this part of Australia remains immune to the virus.

The anger rumbling, the Prime Minister finally decided to accelerate the reopening of the borders. It will be done in stages. It will initially concern the Australian states reaching the famous 80% immunity. This should be the case in Sydney, Melbourne and Adelaide, in South Australia from November.

“It’s time to give Australians their lives back,” Prime Minister Scott Morrison said on Friday. People will be allowed to travel as soon as the

The state will reach 80%, he insisted.

The mandatory 14-day quarantine in Australian hotels – which costs each traveller 3,000 Australian dollars (1,900 euros) – will be phased out. And replaced by a seven-day home quarantine for vaccinated travellers.

Travel will not be open to foreign tourists immediately, but now the government is talking about a return. Scott Morrison said he was working “to welcome tourists back to our country”.

So in 2022, we risk having a two-speed Australia for potential international travellers. On the one hand, the Eastern states of the country (New South Wales, Victoria, Queensland and South Australia) will finally be open to domestic and international travellers, and on the other hand, the states will remain closed according to the goodwill of their local Prime Minister. This would be the case in Western Australia and the Northern Territory (Darwin 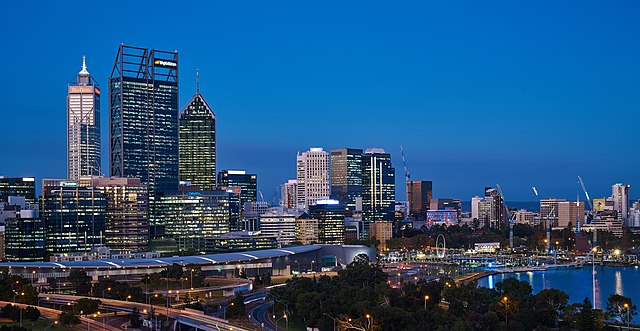 Perth in Western Australia is not expected to benefit from the reopening of borders to domestic and international tourists (Photo: Pedro Szekely, Wikimedia Commons)

Qantas is planning a return to international

According to the latest information on the airline’s website, Qantas will resume three flights per week between London Heathrow and Sydney as well as between Los Angeles and Sydney from November 14.

Qantas has announced that it will open the all-important Singapore airlift in mid-December, which provides connections to Europe. Flights to Canada and Japan would also be added. Qantas will put the rest of the network back on sale in April 2022.

There is one small downside to this takeover for Qantas, however. The famous non-stop flight between London and Perth will not resume before mid-2022. This is due to Western Australia’s phobia of keeping its borders sealed off from the rest of the world.

African air transport hopes for a stronger recovery in 2022