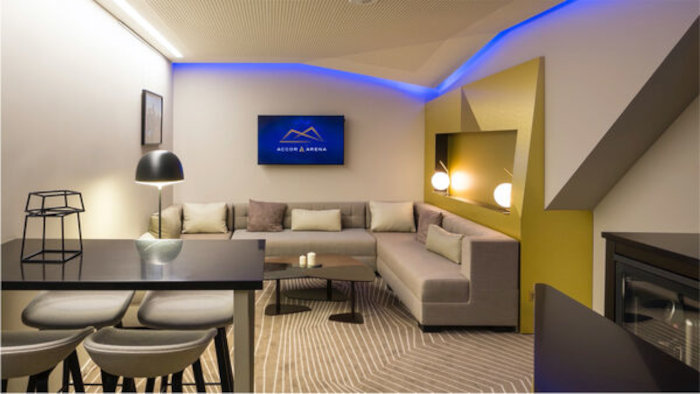 One of the Accor Arena’s dressing rooms transformed into a private office.

The life of office, but much more: a place of work in the heart of the biggest room of sports and spectacles of Paris, the Accor Arena. The setting is singular and it is the one chosen by Spaces to open this month of March a coworking space like no other, and which embodies in its own way the increasingly blurred borders between work and leisure. ” In addition to working in a unique setting, coworkers will be able to continue their working day by enjoying a concert, going for a drink or having dinner in our restaurant

One of the five largest venues of its kind in the world, the Accor Arena unveiled last September its ambition to become a living space with the addition of a food court open during the day, the Ami Coq, and a bar that will start to come alive at after-work hours, named Johnny’s in homage to the most famous French rocker. In this desire to expand its activity from morning to night, but also throughout the year, the Accor Arena has formed a partnership with the IWG group

to extend the field of experiences to hybrid work.

This evolution, favored by the proximity of the ex-POPB to the Gare de Lyon and the headquarters of numerous companies and the Ministry of Finance, also meets IWG’s aspirations for workplaces with extensive services. ” This collaboration allows us to concretize a long-standing project, that of bringing work not only closer to the workers’ homes but also closer to their extra-professional activities

,” explains Christophe Burckhart, General Manager of IWG France, who admits that the example of the Spaces Accor Arena has given him ideas for deploying this offer elsewhere, for example in stadiums in the provinces.

. But with Spaces Accor Arena, the idea goes much further, as it takes advantage of the venue’s off-peak periods by converting its boxes and lounges to professional use. Open from 8am to 8pm, accessible through the VIP entrance of the boxes and lounges, the center can accommodate 200 people and includes a coworking space dedicated to visiting clients as well as to members of the membership formula offered by IWG, giving access to the entire network of the group worldwide.

The Ippon and Sprint lounges in the Accor Arena have been transformed into open spaces with 20 and 40 workstations respectively.

which can be booked by the month, for nomadic professionals who wish to use the venue for a longer period of time. As for the dressing rooms adjoining the concert hall, all 25 m2, 40 of them can be converted into private offices for four people. Equipped with a sofa, a television and a high table, their layout is perfect for informal business exchanges.

To complete the offer, four of these loges can be used as creative meeting rooms and can be rented by the hour, half-day or day. Each of these loges features a well-known brand – Spotify, Heineken, Instagram and Facebook – and plays on the brands’ iconic moods and colors, shifting from green to blue to orangey red. In addition, the Infinity bar lends itself during the day to informal meetings or late-night coworker gatherings, with Spaces Accor Arena customers also enjoying 15% discounts at the Ami Coq restaurant and Johnny’s bar.

Of course, the big question remains: but what happens to all these nomadic workers on the day of the events, as the big concerts approach? They are invited to leave the premises at 2pm, with lockers provided so that they can leave their belongings safely, while being welcome at 8am the next day. Slight inconveniences that the Spaces center compensates by an attractive pricing with, for example, workstations at 350 euros per month.

With the establishment of a coworking center within its walls, the Accor Arena completes its offer dedicated to corporate customers, ranging from nomadic professionals who need to rest for a few hours to the hosting of large events of 20,000 people in its main hall. This MICE offer will soon be reinforced by the inauguration in September of the Phantom, a festive and modular venue designed by Paris Society. With its industrial decor, mirrors on the ceiling, and mezzanine with cozy spaces, the Phantom is mainly dedicated to aftershows and smaller concerts, but will also be able to host seminars for 2,000 to 3,500 people.

A lighter schedule for British Airways