The Accor Arena: a festive metamorphosis, but also business 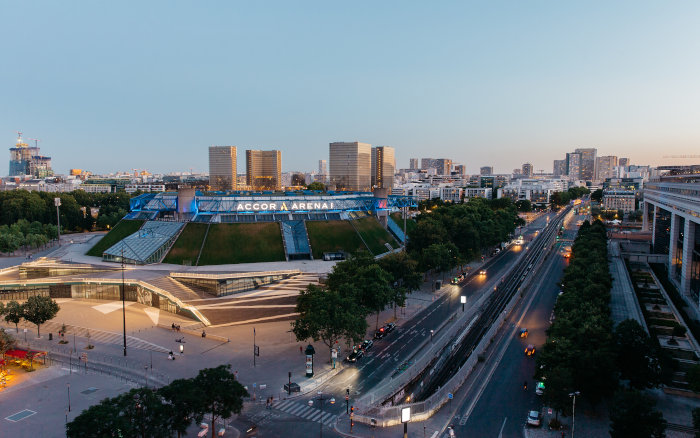 The Accor Arena is evolving from an event venue into a living space in its own right.

Coworking, food court, clubbing: by integrating all these elements within its walls, the Accor Arena will soon be more than a sports and concert hall. Dedicated until now to major musical events and competitions, the venue will be transformed into a living space open to the city and its inhabitants. This change is in line with the shift that many hotels and the Porte de Versailles exhibition centre

have undertaken on their side.

In the mid-2010s, the Accor Arena – the former Palais omnisports de Paris Bercy – had already experienced a new impetus with its expansion, then its subsequent takeover by the American entertainment specialist AEG and its naming by the French hotelier. The pandemic brought out the need to be more resilient and pushed the venue’s management to consider new uses. Through this hybridization, the Accor Arena is in fact opening up to all audiences, day and night, giving itself the time to live almost 24 hours a day.

Mobile professionals will be the first to benefit from this development, as by the end of the year they will find a Spaces space within the Accor Arena. The choice of this coworking brand of the IWG group and not of Wojo

, the Accor subsidiary dedicated to flexible work, could be surprising. It should be noted, however, that Spaces was not yet present in eastern Paris, while Wojo, which was consulted for this project, already had a large space opposite the Gare de Lyon, not to mention the one recently opened not far from there, in Tolbiac.

The proximity of the Accor Arena to this key hub for business travellers, as well as its position on the edge of a business district that includes the headquarters of the RATP, is what encourages this business shift for the event venue. During the day, its lounges will be converted into open spaces that can accommodate 20 or 60 people, while the dressing rooms will host private offices for up to 4 people. Offices where people can work and meet informally, with the dressing rooms having a private area with sofa, television and high table.

Spread over three levels, the Spaces coworking centre will offer a total of 200 workstations. If they feel like relaxing, mobile professionals will be able to take advantage of the ice rink, which is now open permanently. And, to eat, the coworkers will be able, like all Parisians, to appreciate the regional dishes and organic products proposed by the food court

Opening its doors on October 4, l’Ami Coq is the first variation of the food court concept by a French player, in this case a start-up incubated by BPI France. In addition to its focus on French terroirs and its sustainable vocation, with ISO20121 certification in progress, this restaurant has a technological dimension with a 100% autonomous and digitalized customer experience.

Another newly created and already inaugurated venue is Johnny’s bar. Paying homage to France’s favourite rocker, who performed at Bercy a hundred times, this bar is located at the entrance of the Arena and has a terrace in fine weather. Open from 4pm to 10pm from Tuesday to Saturday, and from 4pm to 2am on event nights, it’s a new drop-off point for afterworks, with entertainment around rock legends who have passed through the Arena, including blind tests, DJ sets and live music.

Finally, and this is undoubtedly the key development of the Accor Arena, the venue will have a huge event and party space created in the meanders of its basement, the Phantom. Operated by Paris Society, one of the main players in the Parisian nightlife scene – and also an Accor subsidiary – this multifunctional, modular space will be able to accommodate up to 3,400 people. With its 1,400 sq. m. and 10 m. ceiling height, the hall is ideal for small concerts, DJ nights, festive aftershows or e-sport competitions. But it is also designed for corporate events, whether it be product launches, fashion shows or even trade shows. A new business arena is rising in the East of Paris.