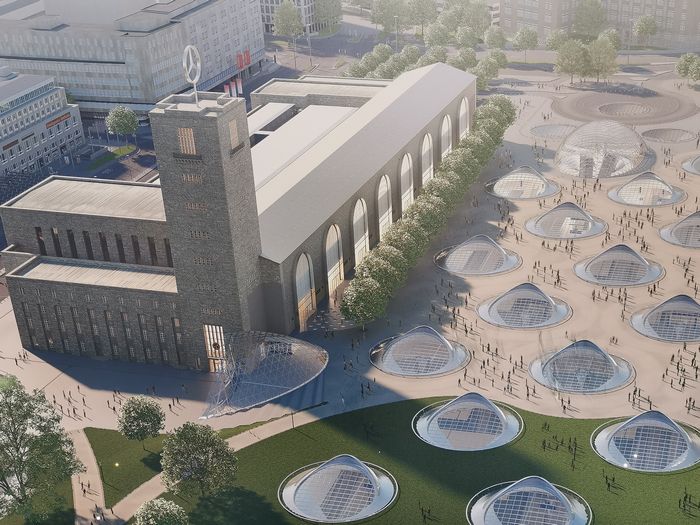 It had been the most mocked project in Europe and often considered a “disgrace” to Germany’s legendary efficiency. The new Berlin Brandenburg International Airport (BBI) took fourteen years to complete – notwithstanding ten years of advance planning! Well, the Stuttgart 21 project will certainly set a new record between planning and implementation… The project, approved in 1997, will take 25 years to be completed. The new railway line between Stuttgart and Ulm is scheduled to open in December 2022, while the new Stuttgart central station is scheduled to open in 2025. In total, almost 12 billion euros will have been injected into this project, 8.2 billion of which will be spent in Stuttgart alone.

In fact, the Stuttgart 21 project had several ambitions. First of all, it is political and economic. The opening up of central Europe and the dominant position that Berlin was gaining as the capital of a reunified Germany shifted the focus to the north-east of Germany. Local politicians feared the marginalisation of the Stuttgart region and the southwest of the country.

The Stuttgart 21 project combines a new underground central station in the city, a real rail hub, and a new route linking Stuttgart to Ulm in 30 minutes by train instead of one hour. The benefit? Stuttgart is at the heart of a 1,500 km long east-west rail line that connects Paris to Budapest in one go. The journey time from Stuttgart to Munich, for example, will be cut from 2 hours 25 minutes to 1 hour 40 minutes. In the future, high-speed trains will be able to reach Munich from Paris in less than five hours, compared with the current 5 hours 40 minutes.

But making Stuttgart into a European rail hub is in fact a huge project. Because the city’s main station is a terminus station. ” This means that all trains arriving from the west and continuing eastwards have to switch to a dead-end track to leave. It has been calculated that a train loses an average of 8 minutes waiting for access to the platforms of the current station “, describes David Bösinger, press officer for the project.

Stuttgart’s main station is to be moved underground so that trains can travel the east-west axis in one go. The iconic above-ground station, built in 1928 and famous for its art deco belfry, is being restored and will serve as a reception hall and access to the underground station. Part of the building will also house a luxury hotel. The underground station will be just as spectacular. ” We have created a station where light will flood the platforms and the hall with 28 spinning top pillars. Designed as shafts of light, they will be scattered over 1,000 m². A unique architectural structure that is also a real technological challenge,” David Bösinger describes.

One of Europe’s most important eco-neighborhoods

However, the new station project has provoked a number of protests from the local population, particularly from environmentalists. A The opposition is now seen by many as political posturing rather than common sense. ” The project will in fact transform Stuttgart’s city centre into a greener place. There will be a de facto extension of the city’s parks because the surface railways will disappear. Instead, one of Europe’s largest eco-neighbourhoods with new green spaces will be built. As for the station, its new structure will be self-heating, with the pillars regulating the temperature naturally and keeping it warm or cool depending on the season,” says the DB spokesman.

Stuttgart is also taking the opportunity to redevelop its city centre. ” Many areas will be completely pedestrianised with direct access to the hotels in a few minutes’ walk. There are also plans for a congress centre in the longer term,” enthuses Armin Dellnitz of the tourist office.

The Stuttgart 21 project has other implications outside the city centre. The huge 9-kilometre tunnel through the city will reduce the journey time by regional train (S-Bahn) from 23 minutes to 8 minutes between the city centre and the airport/trade fair centre.

A new station is being built between the exhibition grounds and the terminal, which will also allow air passengers to continue their journey by train to the whole of Germany as well as to Switzerland and Alsace. ” Stuttgart Airport will thus become a new air/rail hub for the entire southern part of the country and should also promote the business of the trade fairs, which are located right next to the airport,” analyses Armin Dellnitz.

More than 25 years of planning and construction? ” After all, that’s not such a long time for a project of this magnitude, the project of the century,” Christoph Ingenhoven, architect of Stuttgart 21, philosophically remarked in a magazine…

London: a “premium fare” in the metro to reach Heathrow?