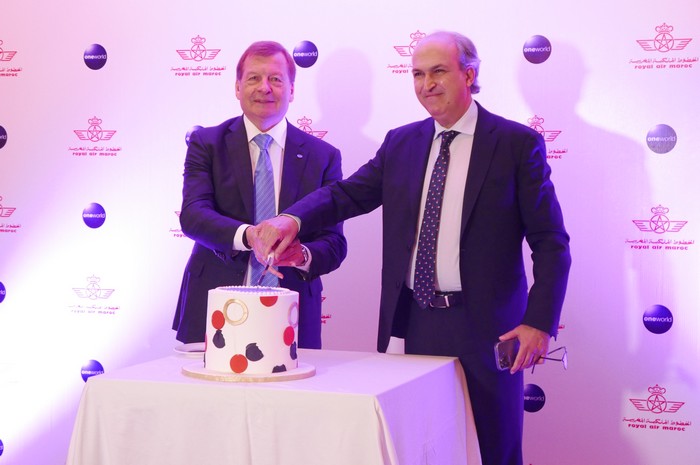 Royal Air Maroc and oneworld officials celebrate the integration of the first African airline into the alliance, after two years of waiting (Photo Florian Guillemin)

Pride was perceptible in the eyes of the crew of flight AT555, which on this Friday, March 25, saw the traditional “water salute” of Royal Air Maroc’s Boeing 737. It must be said that the Moroccan airline and its teams had to show patience and resilience before celebrating their arrival in the Oneworld alliance on the tarmac of Lagos airport, effective since April 1, 2020. Two long years marked, like all airlines, by the health crisis, culminating in the closure of the Kingdom’s borders

, which was finally lifted last February.

Many events would have simply “gone by the wayside” during such a period of time. Not this one. On the contrary, the two partners have planned a series of celebrations, first in Abidjan

, then in Lagos on March 25. Proof if any were needed that the arrival of this fourteenth airline in the ranks of oneworld is not a mere coincidence. Business travelers have already been able to appreciate the concrete benefits, with a constantly improving quality of service. By joining oneworld, Royal Air Maroc opens the door to 650 airport lounges around the world, a thousand destinations and the possibility of collecting and using miles with the thirteen other member airlines. 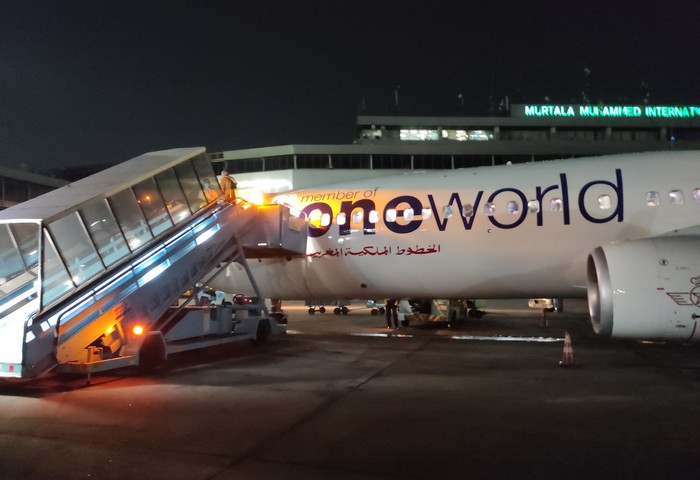 Royal Air Maroc’s Boeing 737 was honored with a “water salute” on its arrival on the tarmac in Lagos, Nigeria (Photo FG)

. It is the first African airline to join the alliance of American Airlines, British Airways and Iberia. And given the promising prospects for the region, the Casablanca hub is set to play a strategic role in the near future for oneworld and its members. Moreover, only three other African airlines are currently members of a global alliance, namely Kenya Airways, Ethiopian Airlines and South African Airways. A configuration that logically influenced the decision of Royal Air Maroc, as Karim Benchekoun, CFO of the Moroccan company explains: ” We did a lot of analysis, and we identified that the best alliance for us was oneworld, because it did not have a member airline in Africa. Skyteam and Star Alliance already had a strong

We have a presence in Africa, and our objective is to complete the network of member airlines. So it was only natural for us to join oneworld, with the benefits that this represents in terms of network

” Royal Air Maroc brings oneworld to Africa, but also brings Africa to oneworld, which is very important,” says Karim Benchekoun, who can boast of adding some 30 destinations to the alliance’s network on the African continent. This new regional anchor point for oneworld should also gain in consistency, as Royal Air Maroc intends to expand its catalog in Africa. Firstly, by improving its existing network in terms of frequencies and capacity over the period 2022-2023. Then by improving its coverage of the territory by targeting medium-haul destinations. ” We are determined to serve East Africa,” says Karim Benchekoun. “There are projects in Kigali, Nairobi, Addis Ababa … These destinations are in the pipeline, but with the crisis all airlines are facing economic difficulties. It is therefore more likely that these routes will be launched in 2024 or 2025

The arrival of Royal Air Maroc in the alliance also marks a major step in the history of the company founded in 1957, while paving the way for an ambitious future. Ambitious, and above all demanding, because joining oneworld means complying with strict specifications and meeting the standards adopted by prestigious members. ” When we talk about oneworld members, we are talking about American Airlines, the world’s leading airline, British Airways, Iberia, Finnair, Malaysia or Quantas… So we are talking about the best airlines in the world. And to be part of this club is a real honor for us. The company had managed to surprise these prestigious interlocutors when it joined, as oneworld CEO Rob Gurney recalls: ” When we first announced that Royal Air Maroc would be joining oneworld, we expected it to ‘come on board’ with us in mid-2020, 18 months later. [ Royal Air Maroc] completed the implementation program in 15 months. But the hardest part may be yet to come, as Royal Air Maroc is now required to keep up with its partners. So much the better: the company’s management is clearly intent on taking RAM into a new dimension.

See also  ITA Airways has a succession of new products