Quarterly results: a positive turnaround for the global hotel industry 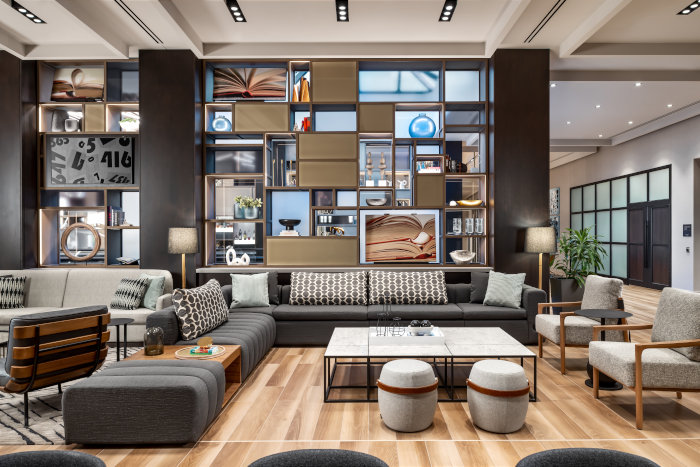 The quarterly results presented by the leaders of the global hotel industry show a definite sense of optimism. After Accor at the end of April, and the announcement of an 85% increase in revenue over the first quarter of 2021, the statements from their executives are unanimous. ” We are increasingly optimistic that the revenue per room (RevPAR) gap will narrow significantly from pre-pandemic levels in 2022,” said Anthony Capuano, CEO of Marriott Group. Similarly, Hilton reported ” solid” results for the first three months of the year, allowing the group to return dividends to its shareholders ” earlier than we anticipated

Of course, the sector is not expected to fully recover until 2023-2024, but March seems to have firmly sealed its return to better days. ” March can be seen as a definitive turning point and the beginning of a solid and rapid recovery for the hotel industry, accompanied by growth in the number of flights offered by airlines

The gradual recovery of intra- and intercontinental travel and the return of long-haul customers suggest that hotel occupancy will continue to improve in the coming months. In March, the Marriott Group already noted that the occupancy rate of its hotels worldwide was 64%, slightly less than 10 points lower than it was in 2019. A positive trend that was further amplified in April, a month in which hotel groups for many recorded results almost identical to the pre-pandemic era.

For example, after a start to the year penalized by the spread of the Omicron variant, the Melia group’s figures have seen continuous improvement, starting from a RevPAR at 57.2% of what it was in 2019 in January, then rising to 83.4% in March, before returning to its pre-Covid level in April. And this case is not unique. Marriott saw its North American hotels also return to pre-Covid levels, while at Hyatt, RevPAR in the Americas, Europe and Southeast Asia regions exceeded 2019 levels in April.

To be sure, the Easter and spring break periods played into this overall result, filling hotels with leisure guests, especially in resort destinations. But several other factors also explain this comeback, starting with prices that have been on the rise for several months and that are globally positioned above their 2019 level.

same time, hoteliers are pleased to

see the return of theIt also reflects the evolution of the business travel and MICE segment. “We continue to see a return of business and group travel, which is contributing to improved RevPAR in many of our key urban markets,” said Keith Barr, group CEO of IHG Hotels & Resorts. Gabriel Escarrer Jaume said he was “pleased to see a gradual recovery in business travel and even a return to growth in the MICE segment towards the end of the year.

For the second half of the year, Melia already expects ” an increase in activity in the MICE and business travel segments thanks to the easing of restrictions and the confirmation of events. ” The Spanish group expects its hotels in the metropolises to move closer to pre-covid levels based on growth in bookings from U.S. and U.K. customers and the return of international conferences and events. In Germany, where the hotel industry is dependent on business travel and major trade shows and conventions, Melia expects this to improve in the second half.

The quarterly results presented by Accor at the end of last month showed the dynamics underway around the world, with the Middle East region returning to pre-covid levels, driven by business in Dubai and, more recently, by the resumption of pilgrimages in Saudi Arabia, an upturn in South America thanks to ” the recovery of demand linked to business customers “, according to Accor, and the expected recovery in the Pacific region following the opening of borders in Australia, which had long remained closed.

On the other hand, China, one of the first countries to see its hotel industry recover, has been bogged down for some time in its Zero Covid strategy and is suffering in comparison with other parts of the world. While Marriott, for example, is reporting an 11% increase in RevPAR in the Middle East-Africa region, the Greater China region is lagging behind with a -41.9% decline. “Business in Greater China continues to be impacted by restrictions put in place to control the increase in Covid cases,” Keith Barr also points out, with IHG seeing a -51% decline in RevPAR in March compared to 2019.

More broadly, Asia is seeing a slower rebound in hotel activity due to the lack of international travelers, an important customer base for many countries in the southeast of the continent. But the coming months should see an improvement on that front. While Melia noted that ” domestic demand remained strong in cities such as Saigon, Yogyakarta, Makassar, Jakarta and Kuala Lumpur, with occupancy similar to 2019,” the Spanish group expects international travelers to ” make a strong comeback in the second half of the year. ”

How can a VPN protect your data while traveling?

SO/ Paris: a new trendy flagship for the lifestyle brand

Budget: how to manage your money abroad?