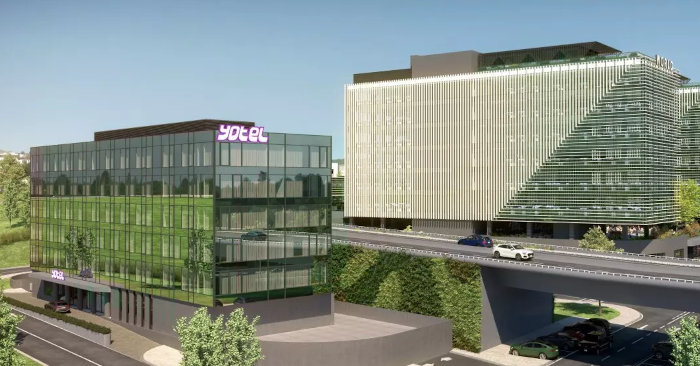 The future Yotel in Lisbon, integrated into the World Trade Center.

After Porto in May 2021, Lisbon will soon have a Yotel establishment. Known for its innovative hotels, combining small, high-tech rooms and designer common areas, the brand initially developed in airport areas is continuing its urban expansion. After Geneva and London this year, Yotel will open in the Portuguese capital in 2024, with a location for business travelers. The future establishment is part of the ongoing World Trade Center development project at the gates of Lisbon. A project led by the Foz Vintage group and described as “the most innovative and disruptive business park in Portugal”

The 35,000 square meter campus combines retail, leisure and office space, including companies such as Worten, Bayer and Helm, which are already located in the complex. Yotel will offer 127 rooms to visiting business travelers, as well as a restaurant and a panoramic rooftop bar, as well as collaborative work spaces, all of which will also be accessible to employees in nearby offices. Also on the agenda is an event space, an auditorium, which ” will also serve as a stage for large events, including the program we are planning for the WTC Business Club

While WTC Lisbon is part of the World Trade Center network, another Yotel property integrated into the WTC international ecosystem is expected to be announced soon. In addition, this development supports Yotel’s ambitions in southern Europe. According to Rohan Thakkar, general manager in charge of brand development, ” The YOTEL Lisbon WTC will allow us to continue our expansion strategy, both in Portugal and in neighboring markets such as Spain and France

Portugal is undoubtedly an attractive market for hoteliers, which the IHG group is also banking on. While the British hotelier already has several luxury hotels in the country, including InterContinental in Lisbon, Porto and Cascais, a new development has been announced for its new Vignette Collection brand

. Already expected in the Algarve with two luxury resorts, the Dona Filipa Hotel and Penina Hotel & Golf Resort, The Vignette Collection will welcome its first urban hotel by the end of the year in Porto, in the Clérigos district.

Housed in a historic 18th-century building on Rua das Flores built for a wealthy Oporto merchant, Casa da Companhia will have its interiors restored to their original style before reopening as a member of the Vignette Collection. Business travelers will find 40 elegant guest rooms and suites, a restaurant, spa and fitness facilities, and

Six openings in 2022 for citizenM

Me by Melia: a new luxury and lifestyle hotel in the heart of Barcelona

Airbnb accommodation : Assets to rely on