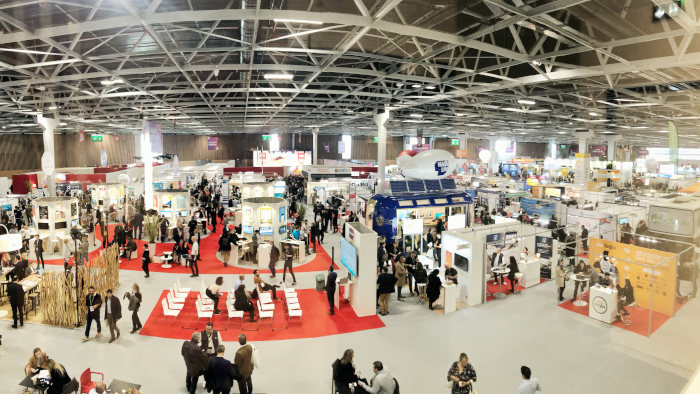 Many trade fairs scheduled in Paris last year or this year have been cancelled or digitised.

The Paris Region Chamber of Commerce and Industry (CCIP) has drawn up a bitter assessment of the past few months for the trade fair and conference market, with activity virtually at a standstill from March to December 2020 and halls desperately empty in the first half of 2021. For those who still have doubts, which are undoubtedly extremely rare, the CCIP confirms, with figures to back it up, that the event industry has been and still is one of the sectors most affected by the consequences of the pandemic.

In 2020, trade show activity was essentially limited to the first two months of the year, apart from a very timid upturn at the beginning of the autumn, which was quickly curbed by the resurgence of the pandemic. In the end, 318 shows were cancelled or “digitised” and only 128 were physically held in the 21 main Paris Region venues in 2020, compared with 434 in 2019 and 446 in 2018 to take a comparable year taking into account the biennial seasonality of many shows. This means a 71% drop in the number of visitors – 1.8 million in 2020, compared to 9.3 million in 2018 – and economic benefits for the Paris region of around €1 billion, compared to more than €5 billion two years earlier.

The number of exhibiting companies – 30,300, including 8,800 from abroad, compared to 108,200 in 2018 – also reached an all-time low with, as a corollary, a turnover generated thanks to the trade shows that was much lower than usual, at just under 6 billion euros compared to more than 22.5 billion, to use the example of 2018. That is to say as much 16.8 billion of sales not realized.

For all that, faced with the impossibility of meeting physically, the players in the sector have naturally switched to digital. According to the Paris Convention and Visitors Bureau (OTCP), counting events held in the main convention venues in the Paris region, but also in 179 other venues – hotels, meeting rooms, event venues – 370 conventions were held in 100% digital or hybrid format. Taking all of this into account, the OTCP estimates that 215,000 delegates physically attended an event organised in the capital, whether it was face-to-face or in a hybrid format, a drop of 76.7% compared to 2019.

Same cause, same effects, 2020 was just as catastrophic for corporate events planned in the 21 main exhibition venues in Paris, with 60% of them unable to be held face-to-face. This resulted in a decrease in attendance and leased space of more or less 80%.

As the first half of 2021 was de facto cancelled due to the ban on events in the capital’s main MICE venues, 154 trade fairs were cancelled and the economic benefits lost p

The professionals are now counting on the end of the year to regain as much as possible acceptable results. With a reopening allowed on June 9, six trade fairs were able to take place before the summer, during the second half of June, including the emblematic Vivatech at Paris Expo Porte de Versailles. The autumn is accompanied by the return of several key events such as Maison&Objet in Villepinte, the Who’s Next women’s fashion show at Porte de Versailles and the leisure vehicle show at Le Bourget, while awaiting the IFTM Top Resa in October. According to a Leads study highlighted by Viparis, 75% of exhibiting companies intend to take part in a “physical” show in the second half of the year. A good omen for the future?

House of Beats: Deutsche Hospitality sets the pace for its lifestyle offering