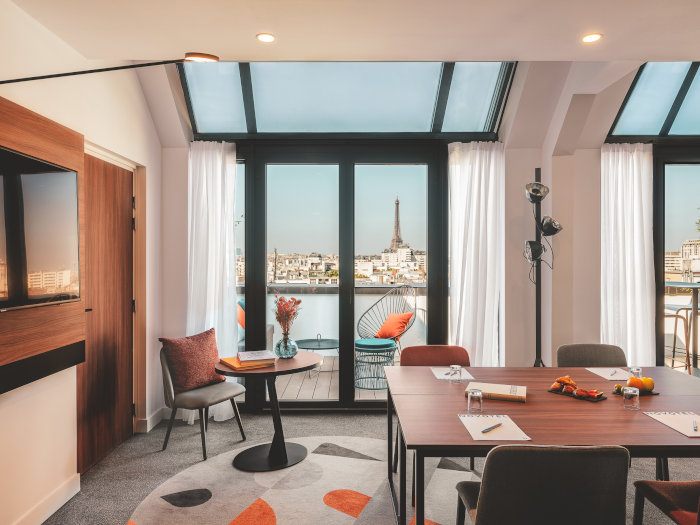 The three suites of the Novotel Vaugirard are transformed into meeting rooms for small meetings.

Suites that transform into meeting spaces with a view of the Eiffel Tower, a rooftop cocktail bar, a strong emphasis on Italian cuisine: former Novotel Vaugirard regulars will not recognize their former Parisian base. Neither will the locals, who are cordially invited to come and enjoy the menu at Quindici – an authentic and generous trattoria designed by chef Denny Imbroisi, who has worked at numerous Michelin-starred restaurants and is a former Top Chef candidate – or to taste the inventive cocktails of mixologist Matthias Giroud at the Il Volo bar. He was the first French executive chef to be ranked among the “World’s 50 Best Bars” for the Buddha Bar Paris.

These two renowned professionals embody the new dynamic impetus in the hotel. Closed for three years, the Novotel Vaugirard has been gradually reopening since the end of August. ” It’s almost like a new opening, a blank page that gave us the opportunity to rewrite the history of the hotel,” says Sandrine Leblan, its manager. Its evolution is in line with that of a brand that was once standardised, and which today does not hesitate to take detours into the world of lifestyle

Led by Jean-Philippe Nuel’s studio, the hotel’s interior architecture is in osmosis with nature, the central theme of the place. The exteriors, particularly the façade, have also been revitalised by the Calq agency. The finishing touches have yet to be added to this metamorphosis with a new restaurant space expected later this year, the Quindici Caffé. A friendly place, open to the street, which will help to anchor the Novotel a little more firmly in the life of its neighbourhood.

Located a stone’s throw from the Vaugirard metro station, not far from the Porte de Versailles for visitors to trade fairs and exhibitions, the hotel has 198 rooms with a loft and industrial feel, with walnut-coloured wood adding a natural touch. The Novotel Vaugirard also has three suites of 30m², 50m² and 65m². This is obviously a premium accommodation offer, with a terrace and a direct view of the Eiffel Tower and the towers of La Défense in the distance, but also an attractive solution for business meetings in small groups. Being modular, and the beds retractable into the walls, these suites can be transformed into one, or even several meeting spaces in a row, as they are communicating.

The seventh floor of the hotel, completely redesigned as part of the renovation work, plays on a trend that is currently very fashionable: the hybrid. In addition to hosting the Il Volo bar, which only opens at 5pm and lends itself to informal gatherings over cocktails and antipasti, the floor is now dedicated to business meetings with, opposite the suites on the other side of the corridor, three other seminar rooms with a total area of 60m². In a more creative style, the top floor of the hotel also offers two spaces designed as artists’ studios, the Loft (45m²) and the Atelier (37m²), both of which also have a private terrace.

To complete the picture, the hotel also has a more traditional event space in the basement with three rooms of 100m², 135m² and 120m² that can be used for seminars, business lunches, cocktails or banquets. By offering a wide range of solutions, the Novotel Vaugirard intends to firmly establish itself in the Parisian seminar market.

Trenitalia is slowly gaining power on the Paris-Lyon route