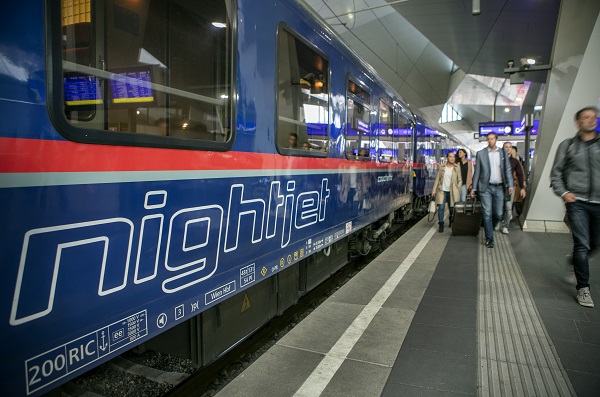 ÖBB has had a particularly eventful year in 2021 for the Nightjet product. Coupled with the European Union’s “Year of the Railways”, the Nightjet network has been a real hit with the public.

In fact, the ÖBB has opened four new Nightjet routes in 2021

. Since May 24, the Nightjet has been operating daily on the Vienna – Amsterdam and Innsbruck – Amsterdam routes. A seasonal summer route was also launched. This was the EuroNight connecting Vienna and Bratislava to Split in Croatia via Graz.

For the winter timetable, Nightjet started two more important routes last December. The first one now connects Paris with Vienna three times a week via Strasbourg, Munich and Salzburg. The second offers a daily Nightjet service from Zurich to Amsterdam. The train runs via Düsseldorf, Frankfurt and Basel.

It has been a great success. “With the return of night trains, we are seeing the development of a different form of travel from metropolis to metropolis,” explained Andreas Matthä, CEO of ÖBB Holding, during the opening of the Vienna-Paris route.

“Not only because it meets the concerns of an increasing number of travelers in the face of the challenge of climate change. But also because of the comfort offered. You fall asleep after a glass of wine in the evening and wake up the next day in another major capital after enjoying breakfast,” he said.

Before the covid-19 pandemic, more than 1.5 million passengers traveled annually on the Nightjet. After a break in night trains in the spring of 2021, ÖBB’s Nightjets were put back into service with promising occupancy rates. Already in the summer, the occupancy rate had reached the pre-pandemic figures. The sleeper car and private compartment offers were particularly popular.

At the same time, 22 cars of the existing fleet are being converted from seats to modern, multi-functional couchettes. The first of these “redesigned” cars has been in service since the timetable change as a “comfort sleeper” on the Vienna – Bregenz line. The other modernized cars will be integrated into the Nightjets fleet throughout 2022.

As for new routes, 2023 will see the launch of another much-anticipated route: from Paris and Brussels to Berlin via Cologne and Hanover. As on the Paris-Vienna route, it will be

This will be a joint operation between the ÖBB, Deutsche Bahn and SNCF. Another line is also in the pipeline on a Barcelona-Zurich route. The line will also pass through France, via Montpellier and probably Lyon.

Could lines linking Italy to Denmark or Sweden, for example, be considered in the near future? “There is a geographical limit to the operation of night trains, notably because of technical constraints in railway signalling. I think the maximum distance that can be served now is 1,000 km. But the EU is working on a new technology,” explains Andreas Matthä.

Many lines should be equipped with the new system before 2030. For example, the Marseille-Nice-Ventimiglia-Turin route is scheduled to be operational in 2027. A complete network of the EU should be completed by 2050.

Rooftops and panoramic views of Paris

Citadines: restaurant and meeting space for its residence in Strasbourg