. The second most populous city in Alsace (110,000 inhabitants) lacks all the epinal images that the region usually conveys. Here, one will desperately look for the pretty half-timbered houses adorned with masses of geraniums that make the charm of Strasbourg, Colmar or Sélestat.

The history of Mulhouse is very different from that of the rest of Alsace. It is written above all in the history of an independent republic closely linked to Switzerland. Until its attachment to France in 1798. Then, from the 19th century onwards, the town developed with the rise of industrialisation. Mulhouse, with its textile mills and then its mechanical industry, was nicknamed the “Manchester of Alsace”. In the 20th century, the city became one of the centres of the French automobile industry, notably with the presence of PSA.

Today, the city offers an interesting mix of Basel, French and German architecture. And it shows great creativity, even positioning itself as the laboratory of new trends in Alsace.

The same applies to hosting MICE activities. For example, the city is ideal for post tours or special events at the incredible Cité de l’Automobile, the world’s largest car museum. Or at the Cité des Trains with its exceptional collection of locomotives and wagons. Another alternative is the former DMC spinning mills, now artists’ studios, restaurants and meeting places.

In addition, the highest climbing wall in France was inaugurated in 2020. At a height of 25 metres, it is ideal for team-building activities. A small seminar room is also available.

See also  A great start to the new school year

But above all, Mulhouse is seeking to reposition itself on a more upmarket business tourism. A card to play because the city can be a good alternative to Basel – 20 minutes away by train – because of lower organization costs. And an excellent transport network with an international airport, high-speed trains and a motorway network.

Alsatian city is putting the finishing touches to the conference centre of the Société Industrielle de Mulhouse, created in 1826 by 22 local industrialists. In its classic early 19th century structure, a 180-seat hemicycle equipped with the latest technology as well as two meeting rooms will be inaugurated on October 22. A garden located in the inner courtyard of the building will be used for outdoor activities next year. The advantage of the SIM is its immediate proximity to the central station from which the TGV trains to Paris and the TER trains on the Strasbourg-Basel axis depart. 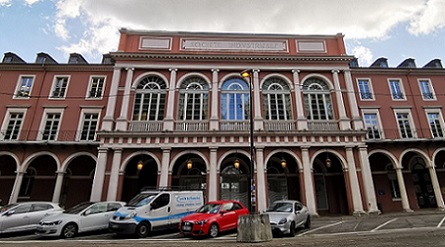 Things are also moving in the hotel industry. The city has a capacity of 1,500 rooms, including 5 four-star establishments in the city centre. There is a gradual move upmarket.

The return of the Kyriad hotel, for example, as a private establishment not affiliated to a group, has transformed the establishment into a charming boutique hotel in the city centre. And it is moving towards a sustainable niche.

According to Mégane Silberhorn, in charge of the business market at the Mulhouse Convention Bureau, two other boutique hotels are in development. The Berti Hotel, close to the Musée de l’Impression sur Etoffes, will be located in a former 19th century German-style mansion.

The former sub-prefecture, located near the central station, is also to become a four-star hotel. The establishment, renamed the “Wallpaper Hotel” because it is also close to the Musée de l’Impression sur Etoffes, should have 70 rooms and include a balneotherapy area. The opening is planned for 2023. It should allow Mulhouse to finally have its first contemporary luxury establishment.