Mauritius: a new LUX hotel to mark the recovery of tourism 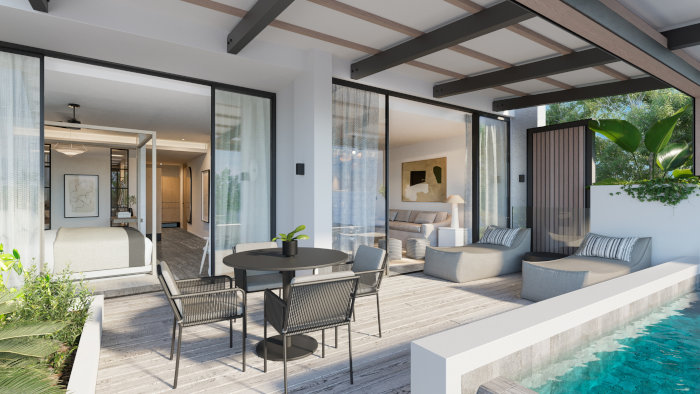 One of the residences with a private pool at LUX Grand Baie.

The reopening of Mauritius to inoculated travellers in early October ends a long frustration with an island much loved by French and European tourists. ” The planes are filling up fast. Two of our hotels are already fully booked for All Saints’ Day“, Véronique Berthier, Vice President Sales and Marketing Europe of Lux Collective, one of the main groups in the Indian Ocean island. The simplified protocol for people protected against the pandemic only requires a PCR test to be carried out 72 hours before departure and two antigenic tests on site, on the first and fifth days. ” They are taken care of by the hotel. Once these tests are done, there is no restriction to visit the island

If tourists find their way back to Mauritius, business tourism should follow suit. ” It may take a little longer for the MICE segment, rather in the second half of 2022,” says Véronique Berthier. Despite its remoteness not very “CSR compatible”, the destination still seems to be popular. ” In our discussions, we feel a real revival of interest in Mauritius, even from large companies, because it is a “safe” destination, with a population vaccinated for a very large majority, notes this sales and marketing manager of the hotel group. Incentive stays, thank you trips: I am convinced that all this will take off again, because there has been so much frustration recently.

The recovery in Mauritius will benefit the whole region, especially the neighbouring island of Reunion, where the LUX group is also established with a hotel that is once again receiving MICE groups as part of operations that had been postponed, Covid obliges.

To accompany the recovery of Mauritian tourism, the LUX Collective group will unveil a new hotel in the north of the island, in Grand Bay, on December 1st. Sophisticated yet relaxed, the LUX Grand Baie will have 126 rooms, divided between 86 suites, 8 villas with private pools and 20 penthouse residences with individual pools. Also on the agenda are a spa, a fitness centre and three restaurants, including one on the beach, another on the rooftop by an infinity pool and a third offering Asian fusion cuisine with a gastronomic twist. ” While the hotel only has a small boardroom-style meeting room, all these places can be privatised for MICE groups

While Lux North Male in the Maldives and the Bodrum resort in Turkey have disappeared from the group’s offer, others will strengthen the group’s portfolio, notably in Asia. For example, at the end of 2022-beginning of 2023, Lux will set up on the island of Phu Coq, in southwest Vietnam, with a 193-room hotel on stilts in the middle of the jungle, overlooking a preserved bay. Also in Asia, the Lux group will continue to develop on the Tea Horse Road, the tea route that runs through the mountains of Tibet, Sichuan and Yunnan. Its offer will increase from seven to ten establishments by the end of 2022, with retreats immersed in their environment, some with no more than six rooms, like Lux Daju Village.

Another major development, and much closer to home, the group expects a hotel in the south of France, LUX La Baraquette Resort & Residences, to open in spring 2023. Set in the heart of a wine estate on the banks of the Thau Lagoon, the location will lend itself to a number of MICE operations in the off-season.

But the five-star brand is not the only one to be developed by the LUX Group, which became LUX Collective at the beginning of 2019. In recent years, the Mauritian hotelier has opened up to new segments such as casual resorts with the Salt brand, all-inclusive with Tamassa, a four-star brand adapted to business groups, and soon urban resorts, with the Socio brand, expected in 2023 in Trianon, a business park near Port-Louis. So many brands born in Mauritius that could extend their footprint elsewhere in the world.

four Good reasons to Take a look at Guadalajara, Mexico, in 2022