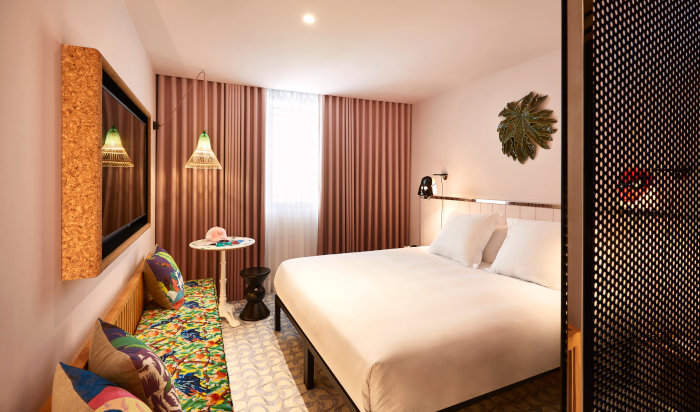 Mama Shelter is very popular in southern European cities. After opening in Rome last October, the lifestyle brand will be opening in Lisbon

on 12 January. For this Portuguese foray, Mama Shelter has found an address in the heart of the capital, Rua do Vale de Pereiro, near the emblematic Marques de Pombal Square and not far from Eduardo VII Park and the famous Avenida da Liberdade.

The playful spirit and colourful design of the brand, which was launched in 2008 by the Trigano family and has since become part of Accor, is a natural fit for this dynamic, festive and authentic city. ” Mama Lisboa is a blend of the city’s sparkling lights, the energy and nonchalance of its inhabitants, but also their modernity and creativity

Tiles created by the Viuva Lamego company, whose expertise dates back to the middle of the 19th century, carpeting in the rooms symbolizing waves in the manner of azulejos: the décor of the place plays on all these aspects by mixing pop culture, bohemian style and Portuguese maritime tradition. Designed by the Mama Design Studio and embellished with works by Bordallo Pinheiro, the 130 rooms evoke the local culture with lampshades made of Portuguese straw or a smart TV embedded in cork.

But, of course, the Mama Shelter Lisbon remains true to its concept of “restaurant with rooms above” with a brasserie whose menu mixes the classics of Portuguese cuisine, French specialities and the Mama’s signature dishes. For the first time, a takeaway pizza service has been added, with a counter overlooking the street.

However, the local clientele is cordially invited to come and enjoy cocktails at the hotel bar, in a modern pop décor, or outside, in a planted patio. ” Mama is above all a meeting place, where the city’s inhabitants mix with travellers and businessmen, and vice versa!

“said Cédric Gobilliard, Managing Director of Mama Shelter. So many guests will be able to spend their evenings in a festive way on the hotel’s rooftop with a view of Lisbon and the Tagus in the distance, a rooftop open from morning until late at night and equipped with a bar, a kitchen and a DJ station.

Beyond this leisure and party offer, the hotel also has a studious dimension, as the building next to the hotel hosts a “Atelier”, a meeting space for up to 25 people, with a 50-inch screen, free WI-FI and all-inclusive services, food and drink.

Mama Shelter expands its footprint in

s it continues to expand internationally, with a Mama Shelter also being prepared in Dubai, Mama Shelter is also continuing to extend its network in France. After Bordeaux, Lille, Lyon, Marseille, Toulouse and of course Paris with a new establishment in La Défense next year, Mama Shelter is preparing to conquer another major French city, Nice. The project, which is being carried out by the Deromedi group, involves the renovation of a municipal services building in the Riquier district and will see the opening of a 98-room establishment in 2023, complete with a restaurant, a gym, a rooftop swimming pool and a planted terrace.

The development of the brand also involves conquering secondary cities, including Dijon. Also expected in 2023, this will involve the metamorphosis of an administrative building in the city centre, in this case the offices of the Caisse Primaire de l’Assurance Maladie, into a 120-room Mama Shelter. A hotel which, as Burgundy is obliged to do, will offer a wine tasting area as well as a 220-seat restaurant. Also on the programme for this project, supported by Hôtels Bourgogne Qualité, is a 250m² cinema.

See also  Nice airport has recovered its passengers during the summer

But the contemporary spirit of the brand does not only fit with the transformation of old offices. In Rennes, the future Mama Shelter is playing a key role in the conversion of several historic buildings in the city centre of Brittany, in particular the 18th century Hôtel des Monnaies 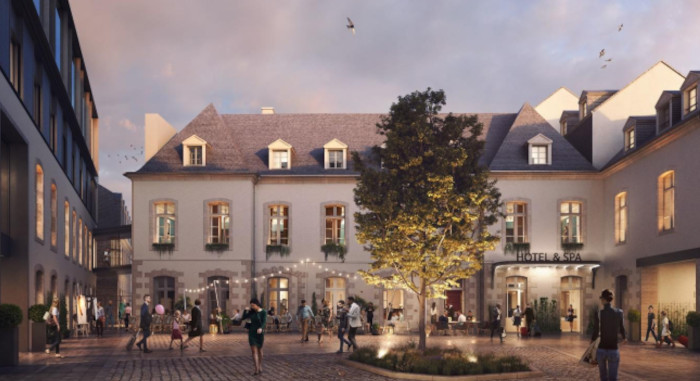 This new urban complex, on which work began in 2018, will incorporate a 119-room Mama Shelter from 2023. A hotel that is obviously fun and lively with its two bar-restaurants and the first rooftop in the city centre with a terrace of almost 200 m². Spa, indoor swimming pool, sauna and hammam, but also a 450 m² seminar area: the hotel’s various areas have been designed to meet the needs of both business and leisure guests.

“We didn’t hesitate for a second when we discovered this magnificent XXL project by the Suitcase Hospitality group, supported by the Legendre Group,” said Serge Trigano, founder of Mama Shelter. In addition to the hotel, a new food offer designed in a food-court spirit, with nine food shops in a short circuit, should make the place ” a real new epicurean spot in the Rennes city centre

“, according to Jean-Baptiste Martin, general manager of Suitcase Hospitality.

The hotel’s central location should make it a preferred stopover point for conventioneers or business travellers passing through.

Air Austral: Airbus A220 and an agreement with Corsair