Mama Shelter arrives in March in the La Défense district 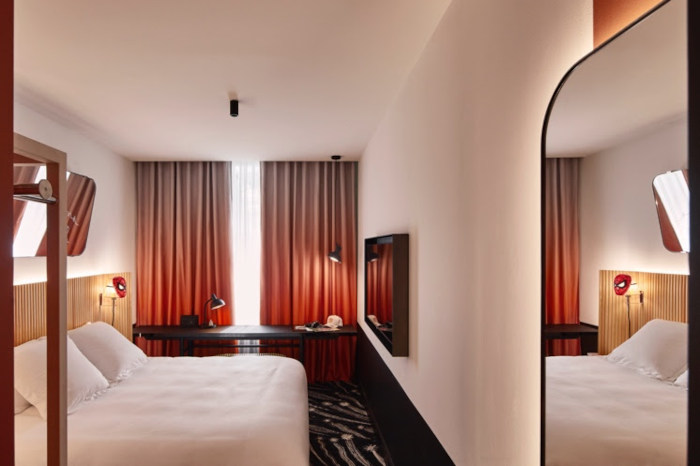 One of the 211 rooms at Mama Shelter Paris La Défense.

Lifestyle at affordable prices, close to business locations: Mama Shelter has already demonstrated its expertise with the opening of a hotel adjacent to the Porte de Versailles exhibition center in 2019. For its third Parisian establishment, the brand launched by the Trigano family, and since integrated into the Accor-Ennismore JV, is continuing along this path and setting its sights on La Défense. Expected to open in March, Mama Shelter Paris La Défense is in line with the business district’s desire to see its hotel offer diversify beyond the classic upscale brands, already materialized by the appearance near the Arena of a Citizen M in 2017, pending an Okko

For its part, Mama Shelter has chosen to locate its quirky sense of hospitality on the other side of the business district, a stone’s throw from the La Défense esplanade and the Neuilly Bridge, within a 14-story building entirely redesigned and restructured by Mama Design Studio. ” This is the best of all worlds,” said Serge Trigano, co-founder of Mama Shelter. It is located in the town of Puteaux (editor’s note: at 10, rue Jean Jaurès) and thus offers the life of a real village with its shops, cafés and restaurants. But it also backs onto La Défense, a few meters from the largest concentration of offices in Europe. And for visitors to Paris, it’s just five metro stations from the most beautiful avenue in the world: the Champs Élysées.

,” explains Cédric Gobilliard, the brand’s general manager. This choice is aimed as much at travelers brought to the area on business as at the employees of companies located in La Défense. At lunch and in the evening, all these clients will find three restaurants, including one overlooking the forecourt of the establishment, an American-style diner with a 1950s decor and offering Caesar salads, burgers, fries and sundaes… At the end of the day, sports fans will be able to meet at the hotel to follow the competitions live, with a pub-style sports bar decorated with a multitude of screens. But it’s during the summer months that the Mama Shelter will take on its festive and attractive dimension with, on the 14th floor, a panoramic restaurant and a rooftop space with a view of the Eiffel Tower, Montmartre and, in the foreground, the Louis Vuitton Foundation.

In a more professional setting

el, the hotel also offers six workshops equipped for meetings and seminars. As for travelers, they will find at Mama Shelter 211 rooms with five-star quality beds and a long table along the window for working. The hotel has a free laundry area and a 78-space parking lot with four electric charges.

Beautiful hotels in the Maldives: Top 20

What to Know About Mexico’s New Privately Owned Tourism Board

What to do in Mauritius? My favorites –