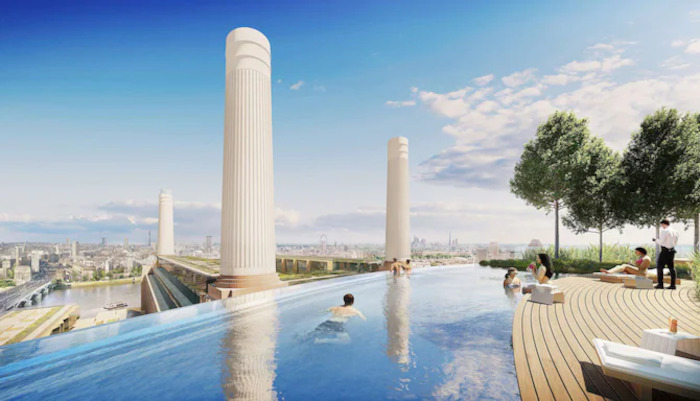 London’s future art’otel is part of the transformation of the Battersea Power Station.

Fans of Pink Floyd will certainly be pleased with the upcoming opening of the art’otel London. Starting this summer, they will be able to lie by the pool of the establishment – on the rooftop as it should be – and dream of seeing a pink pig floating in the air above the Battersea Power Station. Just like on the famous cover of the Animals

album that made this 1930s power station an icon of the British capital. This huge listed building on the south bank of the Thames is in the midst of a regeneration process, its industrial setting preparing to house some twenty bars and restaurants, fashion boutiques and high-end apartments. The project, in which the architectural firms of Frank Gehry and Norman Foster are participating, will also see the creation of a 164-room hotel under the Radisson Group’s art’otel design brand. Is

? Certainly. The opening of the Chateau Denmark will be another proof of this by celebrating the memory of Jimi Hendrix and David Bowie, the Sex Pistols and the Rolling Stones. The entire music scene has passed through Denmark Street, its guitar vendors and recording studios. In this arty setting, the very place where the Rolling Stones recorded their first album, and which was also the Sex Pistols’ pied-à-terre, is being transformed into a 55-room glam chic hotel expected next spring. For what will undoubtedly be one of the most important openings of the year, among others.

Because, at the same time as it is rethinking cultural heritage, the London hotel industry is also reinventing history. The great history, that of the world wars and the time when Winston Churchill or Lloyd George frequented the Old War Office, whose imposing neo-baroque façade is enthroned in the heart of the Whitehall district. Its transformation into a very chic Raffles with 120 rooms and suites

and 11 exceptional restaurants and bars will make this emblematic place accessible to the public for the first time at the end of the year.

Exterior view of Raffles London at the OWO.

While it will take until 2024 to see travelers strolling the halls of the former American Embassy transformed into a prestigious 130-room Rosewood, the qua

he Mayfair district remains a must for the luxury hotel industry. This year, right next to this very chic establishment, at No. 22 Grosvenor Square, a 31-room private hotel-club, Twenty-Two, will be set up within the walls of an Edwardian residence. Also in this neighborhood, Mandarin Oriental

will add a second address in the British capital in 2022, in addition to its Knightsbridge palace. Overlooking Hanover Square, the new Mandarin Oriental will offer 80 private residences and a 50-room hotel where travelers will be able to enjoy an upscale restaurant, a spa and a rooftop bar. Finally, it is also in this emblematic neighborhood, on Berkeley Street, that the eco-luxury brand 1 Hotels will set up later this year with an urban retreat of 184 rooms combining design and CSR, and embellished with a “farm-to-table” restaurant.

But Mayfair does not have a monopoly on chic and lifestyle. After last year’s opening of the “super boutique hotel” The Londoner, the Soho district will host a hotel designed by one of the leading designers of the moment, the Swede Martin Brudnizki, at the end of 2022. Called The Broadwick, it will offer, in addition to a bar on its roof terrace, 57 rooms, including nine suites and a penthouse, with a residential atmosphere, most with balconies.

However, in addition to these high-priced establishments, other affordable lifestyle hotels are also in the works. CitizenM, for example, will make its fourth appearance in the British capital near Victoria Station. The end of the year should also see the Hoxton

brand offer its fourth property, not in East London this time, but in Notting Hill, near Portobello Road, with the 237-room The Hoxton Shepherd’s Bush. 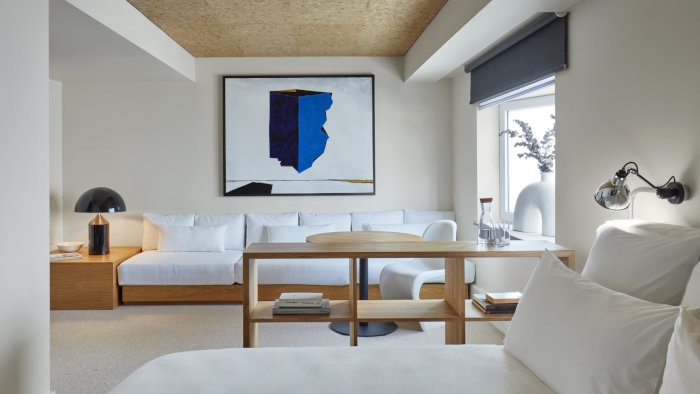 A continuation of the One Hundred Shoreditch.

While Hoxton is making its way from East to West, East London’s up-and-coming neighborhoods are still attractive. One Hundred Shoreditch will welcome its first guests in February and will offer 258 rooms and suites with separate spaces between the bedroom and the work or relaxation area, a residential atmosphere further enhanced in the studio suites with terraces. With six restaurants and bars in total, One Hundred Shoreditch has a meeting space with a view on the top of its seven floors, with five meeting rooms, almost adjacent to the rooftop bar, which can also be privatized for events.

Hotel development also continues on the <a href=”https://www.voyages-d-affaires

.com/city-canopy-hilton-westin-20211025.html” target=”_blank” rel=”noopener”>the City. After the opening last year of a luxurious Pan Pacific, a Westin and a Canopy by Hilton hotel, the outskirts of the business district will see the appearance in the spring of a new member of the Curio Collection by Hilton, the Lost Property St Paul’s London, with a view of the famous cathedral and the nearby City.

As for the Stratford district, which has been undergoing a revival since the 2012 Olympic Games, it will see the Hyatt Group take over a hotel complex in the second quarter that previously housed two IHG brands, Holiday Inn and Staybridge Suites. After renovation, the complex, which is part of the Westfield Stratford City shopping center, one of the largest in Europe, will house a 225-room Hyatt Regency business hotel with 628 square meters of meeting space and a 127-unit Hyatt House for extended stays.

Hilton: the American ambitions of its lifestyle brands

Hilton: a new Canopy in Madrid, a DoubleTree in Brussels