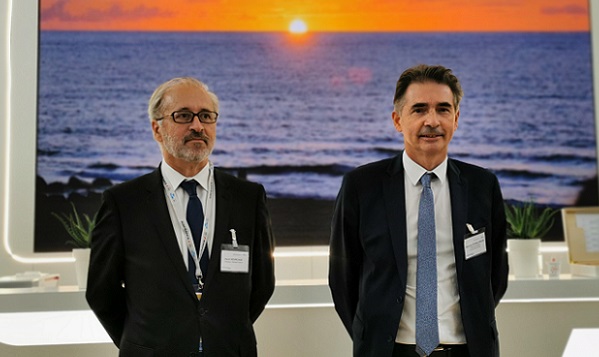 Henri de Hourcade and Henri de Peyrelongue during the IFTM

during a presentation at the IFTM Top Resa tourism trade show. “Air France has prepared itself for this difficult period. We have continued to invest to maintain our entire network. We have also shown ourselves to be as flexible as possible in this economic climate. For example, by reacting very quickly to the leisure offer. At the same time we have guaranteed our passengers a safe, flexible and comfortable journey”, he describes. The environmental issue is just as important, with the assurance of offering a product that is more concerned with sustainable development. The epitome of this desire to combine sustainable development and comfort is the Airbus A220, the first of which has just been delivered. According to Henri de Peyrelongue, the aircraft offers a very high level of comfort while reducing the carbon footprint of a flight by 20% compared to other aircraft of the same type.

The airline is also continuing the renovation of its fleet with a more modern cabin product. Air France is completing the upgrade of the cabins on its Boeing 737-300s on the Caribbean network as well as its long-haul Boeing 777 aircraft. “The upgrade to the new comfort standards will be completed in 2022 for these aircraft”, says Henri de Peyrelongue. The carrier has also invested in its ground product with the opening of several lounges – again the symbol of this renewal being the Schengen lounge in Terminal 2F. It offers space for over 500 passengers.

“We are therefore pleased to have this investment effort recognized. In just a few months, we have received four awards for our service, including most recently the award for best airline in Europe by Skytrax”, adds the General Sales Manager.

Focus on flights to “sunny” destinations

As for the airline offer, it is becoming increasingly dense. “Even if it mainly concerns leisure destinations, where we have shown agility in order to meet demand”, explains Henri Hourcade, General Manager France Air France-KLM. This means a catalogue of 80 seasonal routes this summer, including 25 never served before.

The new winter destinations are therefore geared more towards the leisure market, even if there is indeed a business demand. According to Henri Hourcade, Air France is launching long-haul “sunshine” flights to Zanzibar, Muscat, Colombo and Maputo in Mozambique. “KLM will serve Port of Spain in Trinidad and Tobago, Cancun and Barbados”, he adds. Henri Hourcade.

Air France is not remaining inactive on short-haul routes. On departure from Roissy CDG, it will offer

additional flights to Spain with Malaga, Tenerife and Valencia. It will also offer flights to Rovaniemi in Finland, on the edge of Lapland, in the middle of winter. The carrier will also strengthen its position at Orly with flights to Algiers, Berlin and Munich.

Saint Chinian : a wine and a territory to discover