Leading hotel companies to return to the black in 2021 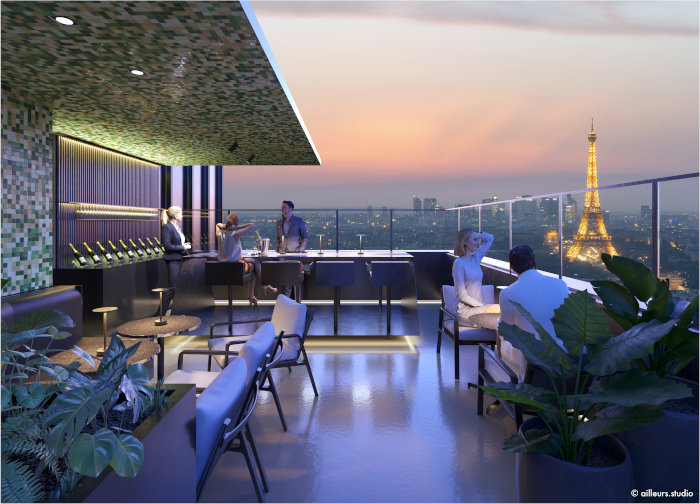 Skybar of the Pullman Paris Montparnasse, reopened by Accor at the end of 2021.

linked to a pandemic that has spared no region in the world. The cascade of results announced by the sector’s leaders for the past year shows that most of them are back in the green. Marriott, the world’s largest hotel group with nearly 8,000 hotels and 1.5 billion rooms worldwide, has announced a net profit of more than $1 billion for 2021, compared with a loss of $267 million in 2020. Britain’s IHG, meanwhile, posted a full-year operating profit of $494 million, compared with a loss of $153 million in 2020, while Hilton posted a roughly equivalent net profit of $407 million.

On the other hand, with its offer more positioned at the top end of the market, the Hyatt group is suffering from the difficulties encountered by destinations that are more sensitive to the travel restrictions of international customers. Thus, for the year as a whole, losses amounted to 222 million, compared with 703 million in 2020, but which have diminished over the months, with the group recording losses limited to 22 million euros in the last quarter.

Conversely, Accor notes a ” significant rebound in activity ” which has enabled the group to get out of the red, with a positive net income of 85 million euros and a gross operating surplus (GOI) of 22 million euros for the year 2021. This is a very clear turnaround compared to the loss of nearly two billion euros (-1,988 million euros) and an EBITDA of -391 million recorded in 2020. ” After a start to the year that was still disrupted by health constraints, 2021 was marked from the spring onwards by a significant improvement in our business and increasingly strong momentum month after month until December

,” said Sébastien Bazin, Accor CEO. Indeed, RevPAR – revenue per room, the key indicator of the hotel industry that combines the average price and attendance – of the French group shows a limited decline of -27.2% in the last quarter compared to 2019, against a decline of -46% for the whole year.

Similarly, in the last quarter of 2021 alone, and compared this time to 2020, the Hilton Group recorded a 104.2% increase in revenue per room, compared to a 60.4% increase over the entire twelve months. ” We are pleased to see continued recovery throughout 2021, with our fourth quarter showing strong results compared to 2019,” said Christopher J. Nassetta, Hilton’s CEO. Noticeable from the summer onward, the recovery accelerated as the months progressed to approach

A horizon that has cleared as 2021 progresses

With average prices nearly back to pre-crisis levels and attendance up significantly, the horizon has gradually cleared. ” Leisure demand continued to shine in the fourth quarter, with a slower but steady improvement in demand from business travelers and groups,” said Anthony Capuano, CEO of Marriott. In its analysis, STR shows this gradual return of business travelers in the major European cities with a month of November that was generally better than September. Similarly, in the United States, weekday demand, mainly from business travelers, returned last quarter to 92% of what it was in 2019, compared to only 68% in the first quarter and 82% in the second.

Of course, this uptick in business in the second half of the year was abruptly halted by the Omicron wave, but not swallowed up by it. Hyatt points out, for example, that while RevPAR fell back to 63% of 2019 levels in January, it rose to 68% in the first two weeks of February. Reassuringly for the sector, the group is also seeing continued strong booking volume for the coming months, with the same observation being made on the Marriott side. ” While Omicron caused a temporary setback in the recovery of global demand, particularly for groups and individual business travel, new bookings have rebounded across all customer segments to pre-Omicron levels,” said Anthony Capuano. This leaves Marriott’s boss optimistic that the recovery ” will progress significantly throughout 2022 on a global scale.

Europe up, China down

As for the analysis of the results by region, they show that the United States is still leading the recovery at the global level, thanks in particular to the importance of its domestic market. According to figures announced by Marriott, the U.S. group’s RevPAR is gradually returning to pre-covid baselines with a 15.3% decline in the last quarter for the U.S. and Canada compared to 2019, while the group’s international hotels are down -28.2% compared to 2019. ” All regions saw a significant recovery in RevPAR in the fourth quarter compared to the third quarter, with the exception of the Greater China region, where the recovery stalled due to its zero Covid policy,” commented Anthony Capuano. The consequences of this strict policy have also been seen by Accor, whose RevPAR of hotels in China is down by -32% in fiscal 2021 compared to fiscal 2019.

The results unveiled by the French group also give a fairly accurate idea of the dynamics at work around the world.e. France, with the good performance of its domestic leisure clientele and the upturn in corporate seminar business, is driving the Southern Europe region, whose overall RevPAR is now down by only -17% in the fourth quarter compared to 2019, representing a positive change of +7 points between the third and fourth quarters. Like France, Spain has seen a clear upturn since the summer and the United Kingdom is following a similar trajectory, with London nonetheless penalized more than Paris by the limitation of international customer travel (-63% over the year, compared to -56% for the French capital). Germany is suffering from stronger health restrictions than in neighboring countries, with RevPAR down -66% for the full year compared to fiscal 2019.

For its part, Asia-Pacific, with the easing of sanitary restrictions from the fall, particularly in Thailand and Indonesia, or with the gradual reopening of internal borders in Australia, has moved forward again, with its RevPAR improving by +9 points between the third quarter and the fourth quarter. Driven by the holding of the World Expo in Dubai, the rebound in activity between the third and fourth quarters is still noticeable in the India, Africa, Middle East & Turkey region, with an increase of +28 points from one quarter to the next and a RevPAR above the 2019 level in the last quarter.

See also  Hamad International Airport in Doha is back in business

Roissy CDG 2G reinvents the idea of the airport

Fam: Egypt with Tours for the World