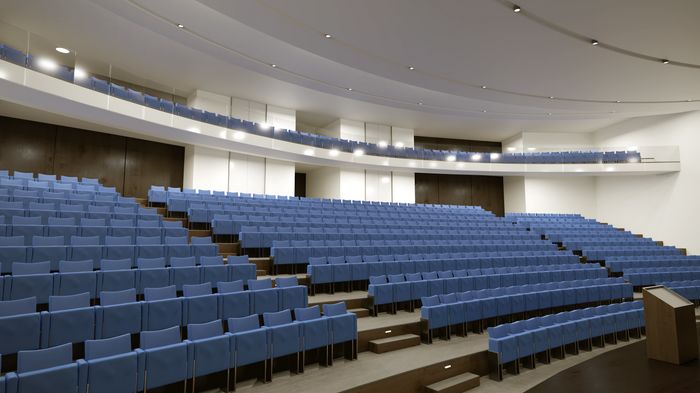 With the inauguration of the Millenium, Lausanne has a new convention centre

Lausanne is ready for the MICE recovery, and is equipping itself with new assets to make the difference in a sector that is more competitive than ever. The Olympic capital is inaugurating its brand new convention centre. Accessible since this summer, the Millenium is gradually opening up to meeting and event organisers. Several areas opened their doors in mid-September: the Executive conference centre, surrounded by a terrace on the 6th floor and equipped with five rooms; and on the 1st floor the Business centre with its eight conference rooms, five of which are bathed in daylight.

The most imposing infrastructures will open at the beginning of 2022. Among them, La Scène: the largest room in the Millenium with a capacity of 500 participants is equipped with a vast LED screen (22m x 4) and integrated cameras. ” We have also thought about hybrid

seminars, and thanks to the production studio which is right next to The Stage, we can capture the seminar and broadcast it on the platform of your choice”, assures Brice Chatelin, Sales Manager at Millennium Events. As for the Espace, this reception and exhibition room (450 m²) will be able to host gala dinners for up to 350 people. Another opening expected for 2022: the Club, a nightclub that can also be privatised for corporate parties. The catering side has been entrusted to Fabien Foare, Meilleur Ouvrier de France, and will be embodied in two restaurants: La Verrière (300 people) and the Brasserie, which opened at the end of September with a gastronomic positioning, in addition to the bar, Café Milenium.

” What better proof of Lausanne’s dynamism than to open such a building at this time of year? The latter is counting on the reasonable proportions of the project to make a place for itself in the Lausanne MICE landscape, which could already count on two larger conference centres capable of hosting up to 3,000 people. ” The aim of the project was to fit in a capacity of 500 places, which corresponded to a gap in the Lausanne market, between the hotels and the large conference centres

“, explains Brice Chatelin. A gamble that could quickly prove to be a winning one, given the health context and the tendency to organize events on a smaller scale than before the crisis…

Check-in times are getting longer at German airports

In the United States, doubts about 5G technology for the air