Sheraton’s brand reinvention has taken off 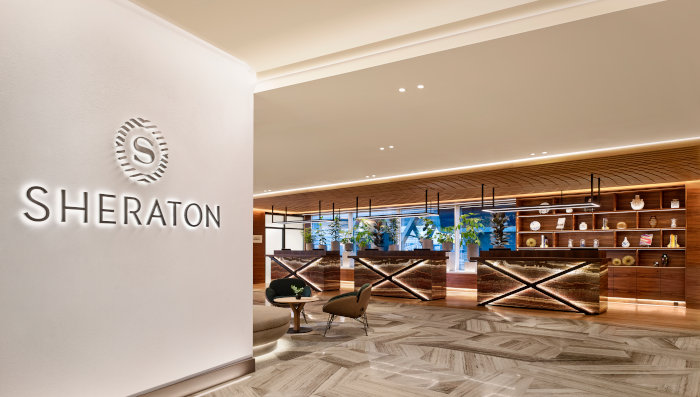 Announced in 2019, but slowed by Covid, the reinvention of the Sheraton brand is beginning to materialize in the Europe-Middle East-Africa region. While some 50 properties worldwide will embody the brand’s new vision by the end of the year, the Sheraton hotels in Tel Aviv, Istanbul Levent

and Grand Dubai were the first to implement the flagship business travel brand’s new concept.

Other hotels have joined them in this evolution, which revolves around contemporary design and lively lobbies for relaxing, working and dining. In the Middle East, the Sheraton Jeddah has undergone a year-long renovation and now offers 172 completely redesigned rooms and suites, three dining venues and a lobby

where business travelers will find Community Tables, Studios and Booths to work and socialize. And that’s in addition to five meeting rooms and a ballroom with private access.

Among the fundamentals of the new brand concept are Community Tables where guests can work. Here, the Sheraton Amsterdam Airport.

In Djibouti, these Community Tables and Studios, the brand’s new signatures, are also present in what was once the first international hotel to open in the city, on the Serpent Plateau in the former diplomatic quarter. The setting has changed a great deal in the 40 years since it opened, and the Sheraton Djibouti is the first in Africa to introduce this new concept after a multi-million dollar investment. The program includes 185 redesigned rooms and a sophisticated-looking Sheraton, renovated meeting spaces and a ballroom, plus a swimming pool and private beach.

But the renewal movement also extends to Europe with the Sheraton in Krakow, Poland, a hotel with 232 rooms and suites, complete with meeting rooms and, appropriately, new work spaces. But above all, it is two brand new airport hotels with conference centers in Frankfurt and Amsterdam.

With 58 meeting rooms and a capacity of up to 1,200 people, the Sheraton Frankfurt Airport Hotel & Conference Center is one of the leading hotels of its kind in Europe and is directly accessible from

the airport terminal. After three years of renovation, it now offers a completely redesigned experience with updated rooms and suites, the vintage atmosphere that emanates from its bar, The Eatery, in the heart of the atrium, and its community tables and studios where guests can work. For business travelers, the hotel has also revamped the look and service level of its expansive Sheraton Club, offering complimentary food and drink from morning to night.

Another hotel that has undergone major renovations in the past year is the Sheraton Amsterdam Airport Hotel & Conference Center. Like Frankfurt – but also Paris CDG – the hotel is connected to the Schiphol terminal and intends to embody a new generation of airport hotels. With 417 renovated rooms with new showers and productivity tools, three bars and restaurants, one of which, the Commune, incorporates a coworking space, and studios for working in peace or holding small meetings, the location lends itself to the different moments of a business trip. All of this is in addition to its 30 or so rooms dedicated to meetings and events, the largest of which can accommodate 550 people.

” After the transformation of three branded hotels in Tel Aviv, Dubai and Istanbul, we are delighted to welcome five more hotels in the EMEA region that are entering a new chapter illustrating the brand’s new vision,” said Amanda Nichols, Sheraton’s Global Brand Leader, Sheraton Hotels & Resorts. A new chapter that will continue to be written in other establishments, including the Sheraton Istanbul Esenyurt and Abu Dhabi. But business travelers will also be able to discover the new face of the brand in France, notably at the Sheraton Nice, opened in mid-May, and soon in Bordeaux. Again, with two airport hotels.

The Talise Spa at the Jumeirah Hotel Port Soller Mallorca

Eurocontrol confirms the recovery of air traffic in Europe