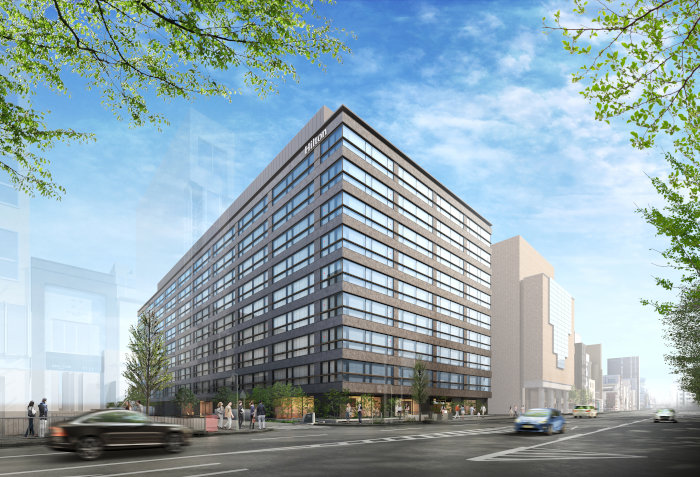 The future Hilton Kyoto, expected in 2024.

Although Japan is only timidly reopening its borders, business travelers will be the first to be affected by the resumption of tourism to the Land of the Rising Sun. For the occasion, professionals will find a new drop-off point in Kyoto with a Hyatt Place located in the city center, at the southwest corner of the Kyoto Imperial Palace. The hotel is directly connected to the Marutamachi subway station and offers convenient access to Kyoto Station, a ten-minute subway ride as well as by car, and to the International Conference Center, where the Kyoto Protocol on sustainable development was signed in 1997.

In keeping with the Hyatt Place brand concept, the hotel has a designer atmosphere and relatively limited services, with a fitness center and a lobby bar offering freshly prepared meals 24/7. As for the rooms, there are 239 of them, including three suites. Spacious, they are equipped with a sofa bed and all have separate areas for sleeping, working and relaxing.

The former imperial capital of Japan is also on Hilton Group’s growth plans. Last year, the U.S. hotelier already opened the luxurious LXR-branded Roku Kyoto there, while in the mid-range niche, the Hilton Garden Inn Kyoto Shijo Karasuma is expected later this year. In addition to these two openings, the group has added a new project with a hotel under its Hilton Hotels flagship brand, which will be located in the heart of downtown Kyoto, in Sanjo-Kawaramachi, near the central business district and within walking distance of major tourist attractions. While business travelers will have to wait until 2024 to reside there, its contours have been unveiled with 313 rooms, four restaurants, a bar, but also banquet and meeting rooms and an executive lounge. Among other amenities, guests will also be able to enjoy spa facilities, an indoor pool and a fitness center

Apart from the big hotel groups, business travelers who love local culture will have the opportunity to stay at an original hotel, the Shijo Kawaramachi Onsen, starting this June, which is separated into two parts: the Japanese-style Soraniwa Onsen Terrace Kyoto, and the Bettei Kamogawa, which houses about 30 luxury rooms. As the name suggests, the hotel is dedicated to the Japanese culture of hot water baths, with private onsen in most of the 100 Japanese-style rooms and the 30 Western-style rooms, all of which have a terrace. More than that: the hotel, located in the center of the city, has a

-ville, a few minutes’ walk from Shijo-dori and Kawaramachi-dori shopping streets, is topped by a rooftop with a large overflowing onsen. For a relaxing dive with a view of the whole city.