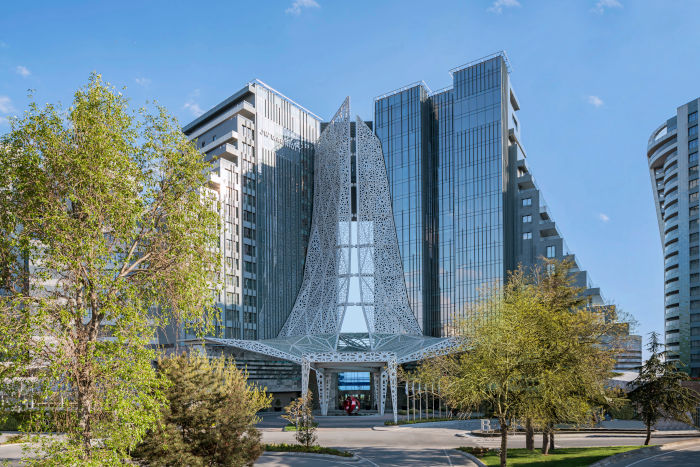 JW Marriott continues to expand in major global cities. By 2025, the American group’s premium brand has announced a hotel in Tokyo with 200 rooms and nearly 1,000 m2 of MICE space. It will be located in a new building complex, the result of the rehabilitation of the former JR Shinagawa Depot Railway Yard and located in the city center, between Shinagawa and Tamachi stations.

But while waiting for this distant opening, JW Marriott has already conquered two new major cities with almost simultaneous openings in Istanbul and Sao Paulo. The latter, announced earlier this year, is the result of the takeover of the former Four Seasons, which opened in 2018 and has been closed since late 2020. Located along Avenida Nações Unidas, within the LEED-certified Parque da Cidade complex, the hotel offers a new luxury drop-off point for business travelers in Brazil’s business metropolis, while presenting itself as an ” oasis in the heart of the city,” an urban retreat offering ” a welcome respite from the concrete jungle that surrounds it

,” according to the hotel’s director, Rosana Okamoto.

With landscaping designed by architect Sérgio Santana, an extensive spa and state-of-the-art fitness center, a swimming pool, gourmet Italian restaurant and cocktail bar, guests will find plenty of opportunities to relax after their flight or day of work or meetings. Another of the hotel’s highlights, as the JW Marriott Sao Paulo is home to a convention center of more than 3,000 square meters, with 10 rooms, most of them with daylight, and the largest of which can accommodate up to 600 people.

Also emphasizing design, conceived by American architectural firm HKS, the 258-room and suite hotel also cultivates its arty side with exclusive artworks created by Brazilian artist Burle Marx and painter Antonio Malta, among other players in the local scene 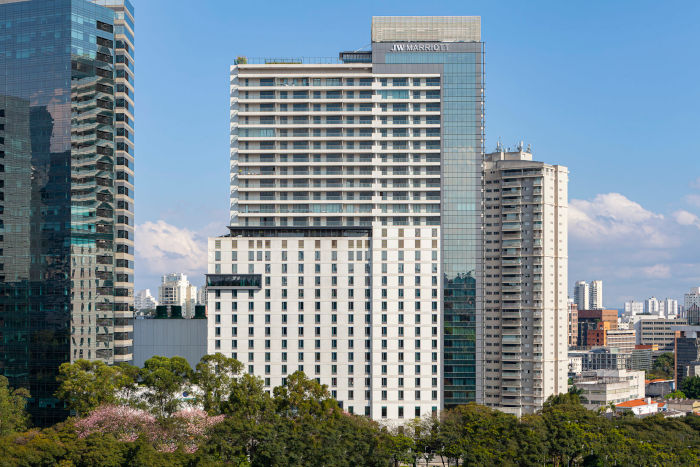 JW Marriott Sao Paulo In the

same way as in Sao Paulo, the JW Marriott Hotel Istanbul Marmara Sea plays on the idea of an urban and design resort that is as attractive to leisure as it is to business guests. This is due to its location, on the edge of the Marmara Sea, in the Atakoy district, but also to its wellness offer with a La Vallée spa, indoor and outdoor infinity pools and, as Turkey is obliged to do, contemporary hammams, or even its shopping dimension with several boutiques integrated into the complex.

On the restaurant side,

The hotel offers a ” myriad of culinary options,” including Ceres, which mixes Mediterranean, Middle Eastern, Southeast Asian and fusion dishes on its eclectic menu, complemented by an outdoor terrace, a spa restaurant, bars galore, and starting in June a Japanese table led by Michelin-starred chef Akira Back. In addition, the hotel is committed to a “farm to table” program and has its own organic botanical garden to supply the restaurants with vegetables and aromatic plants.

A focus on well-being, but also a business dimension

But the JW Marriott Istanbul, recognizable by its lobby that architecturally reinterprets flying carpets, is above all cut out for events and meetings with a dedicated space of more than 2,000 square meters, including eight meeting rooms, a 600-person ballroom with an outdoor entrance and a hall for weddings extended by a terrace. Business travelers will also find a 24-hour business center and a VIP lounge for members of the Marriott Bonvoy program and executive room guests.

The rooms themselves. There are 204 rooms and suites, all spacious and offering for the most part balconies overlooking the Marmara Sea and Istanbul. The hotel’s suites add to that spacious contemporary living rooms and dedicated kitchen areas, while the presidential suite also has a private gym and indoor and outdoor Jacuzzis.

Overview of the lifting of health restrictions around the world

7 Unconventional Meals to Take in in Mexico Town | TravelAge West