Journey in the land of time: from Fribourg to Neuchâtel and Bienne 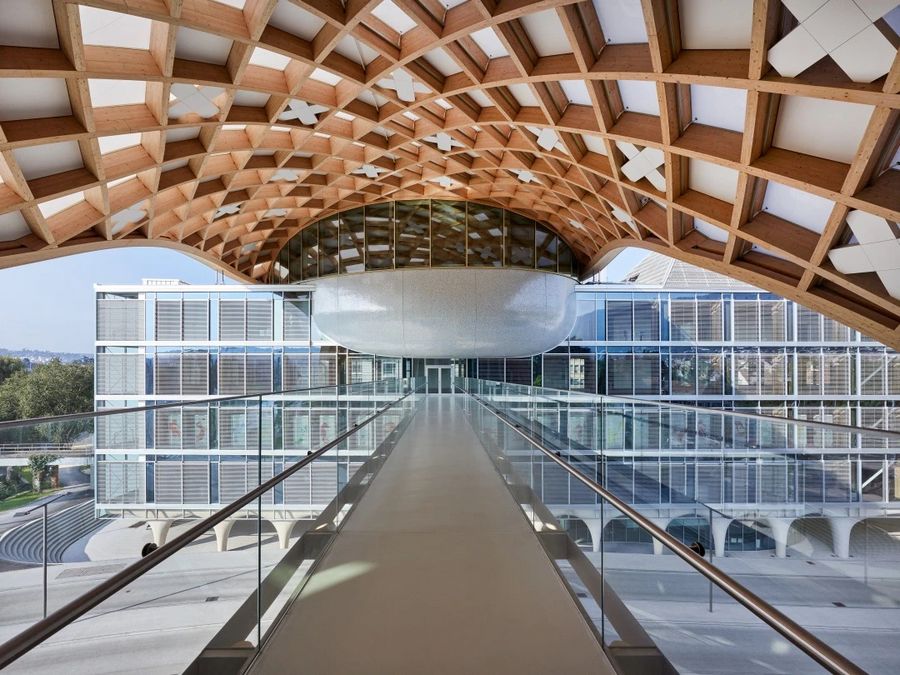 In 45 minutes by train, we leave Lausanne to discover Fribourg, capital of the canton of the same name. Fribourg is the counterpart in French-speaking Switzerland of the city of Bern. Behind the creation of these two cities in the 12th century, there is a great dynasty of German origin, the Zähringers. However, in the tourist circuit, Berne has somewhat overshadowed Fribourg. Wrongly so!

Like Berne, Fribourg is one of the most beautiful medieval cities in Europe. The latter has been preserved because it is surrounded by fortifications from which powerful watchtowers still emerge. As you walk through the streets, you will be amazed by more than 200 gothic style houses and an incredible density of 18th century mansions. The molasse – a local stone – declines endlessly in a palette of light gray tones, some of them with green reflections. It gives Fribourg its unmistakable charm, especially in the sun!

Fribourg also competes with Bern for the privilege of having the most beautiful cathedral in Switzerland, with the highest tower. It measures 74 meters, while the one in Bern reaches 100 meters. There is a small difference in this competition: Fribourg is a Catholic cathedral, Berne a collegiate church, because it is Protestant. The honor is safe for both cities 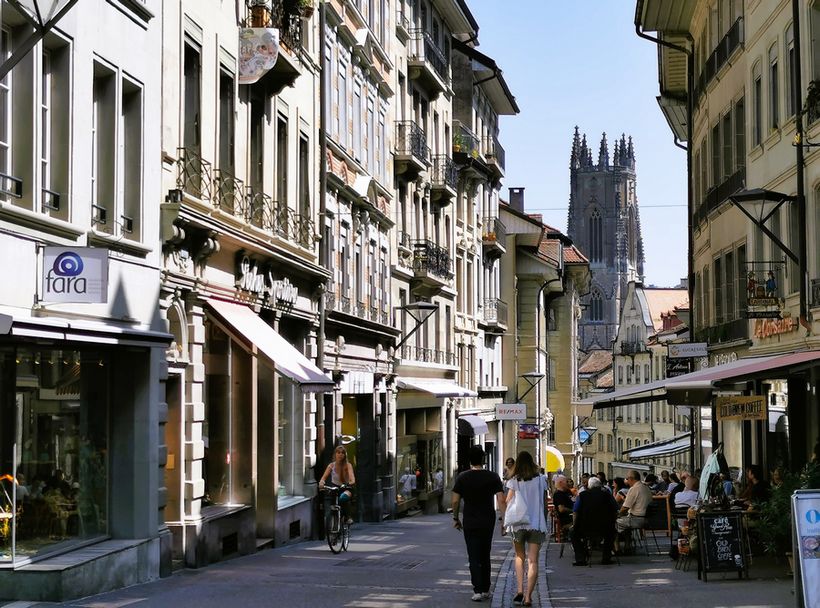 Old town of Fribourg with its cathedral in the background (Photo: Luc Citrinot)

It takes only one hour by train to reach Neuchâtel from Fribourg. Along its lake, the largest in the country and entirely on Swiss territory, the third most populated city in French-speaking Switzerland looks like a riviera. The bourgeois houses from the beginning of the century line up wisely along the promenades, interrupted by a few large buildings: the Museum of Art and History, the former central post office, the former Latin College (now a library) and the inevitable Beau-Rivage Palace.

A few meters away, the lower town with its medieval houses – including the beautiful Maison des Halles and its oriels – is buzzing with life around its market. While on the heights, the castle and the collegiate church with its glazed tile roof complete this postcard image.

There is something deeply French about Neuchâtel. This is due to the proximity of the border, only 35 km away, but also to the rule of French ruling families for several centuries. A Burgundian dynasty in the early Middle Ages, then the d’Orléans-Longueville family until 1707 and finally a brief Napoleonic interlude during the city’s Prussian period.

Along the rue du

In the Faubourg de l’Hôpital, the beautiful facades of the town hall, the Villa Castellane and the Hôtel DuPeyrou are all in the classical French style. Built in yellow Hauterive limestone, these facades take on an almost bronze color in the evening.

This made Alexandre Dumas say that Neuchâtel was ” carved in a lump of butter”.

The writer was not the only Frenchman in the city. Voltaire, Diderot, Balzac, Blaise Cendrars and Rousseau were also in Neuchâtel. One would forget that the latter two were in fact Swiss!

The city also offers a first approach to Swiss watchmaking. There are two places where this can be done. At the Museum of Art and History, three androids “The Writer”, “The Musician” and “The Draughtsman”, created in La Chaux-de-Fonds, the cradle of watchmaking, demonstrate a technical precision that is unique in the world. These creatures were the delight of the European royal courts in the 18th century. 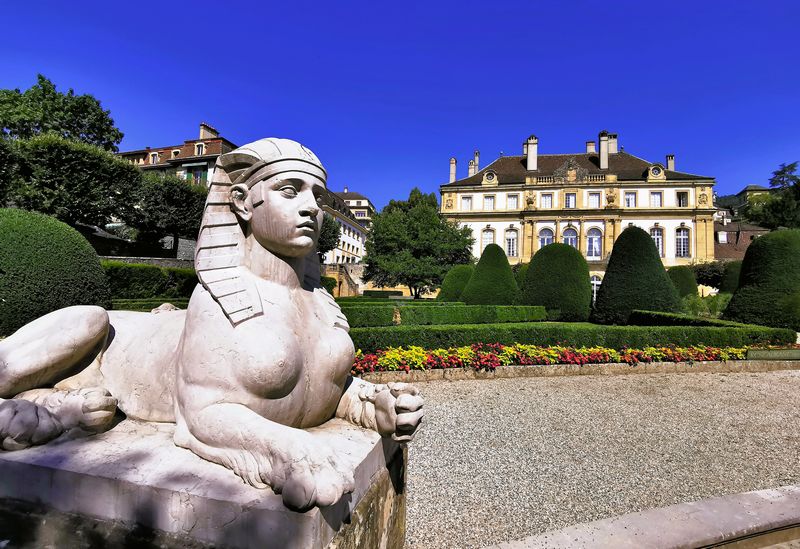 The Hotel DuPeyrou, built in the Louis XVI style in Neuchâtel, is home to a luxury restaurant and meeting rooms (Photo: Luc Citrinot)

can also learn how to make your own watch in a watchmaking workshop. The Centre horloger offers the possibility to discover the fascinating world of watchmaking by assembling and disassembling some components of a mechanical movement or even to assemble a watch in its entirety

Two other workshops, the “Apprentis du Temps” and “Le Garde Temps” offer similar activities. The first one is located in Le Locle, the second in La Chaux-de-Fonds. Both cities are at the heart of the Swiss watchmaking history. Le Locle is home to Tissot, Montblanc and Zenith. The Corum brand has been closely linked to La Chaux-de-Fonds for 100 years. The city is also home to the workshops of Breitling, Cartier, Girard-Perregaux, Jaquet Droz, JeanRichard and TAG Heuer. They can all be visited by appointment.

Even more than Le Locle, La Chaux-de-Fonds is the industrial heart of the Swiss watchmaking industry. The city developed according to an urban plan imposed by the watchmaking factories. In the middle of the 19th century, the watchmaking industry integrated workshops and dwellings. But it also supported the development of running water, the construction of railroads, schools and public buildings.

A unique urban structure that has earned the city – as well as Le Locle – a UNESCO World Heritage Site in 2009. An exhibition on the space of watchmaking urbanism explains the specificities of this architecture. From the top of the 14th floor of the Espacité Tower, you can also have a bird’s eye view of the checkerboard of streets and their workshops. In 1870, these workshops employed 4,500 people, or half the local population! In addition to visits to watchmaking workshops and apprenticeships, Le Locle offers

me La Chaux-de-Fonds each have a watchmaking museum 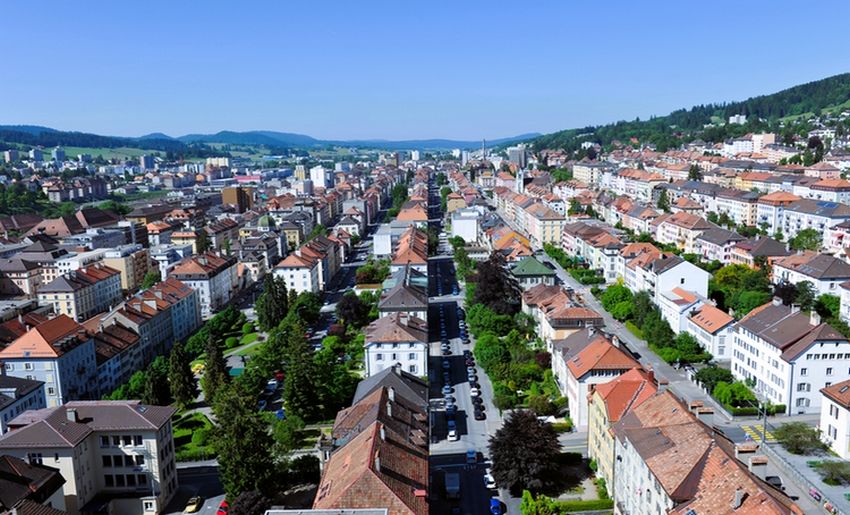 On the borders of the cantons of Neuchâtel and Berne, we reach the singular city of Biel. Probably not the prettiest city in Switzerland, even if its small historical center is worth a look, Biel nevertheless offers two specificities to the curious. It is officially the only totally bilingual city in Switzerland where German and French are spoken and written without distinction. The distribution between French and German speakers is almost balanced with 47% for the former and 53% for the latter.

Here again, a detail little known to the general public, Biel is emerging as the true watch capital of Switzerland. In the New Museum, several rooms tell the story of the city’s development as a watchmaking and industrial center. The first watches of famous brands are on display.

The tradition has continued to this day: Rolex for the movement mechanisms, Mikron and Movado have their manufacturing centers in Biel. The Swatch Group also has its headquarters and factory in Biel. The group is behind the brands Breguet, Longines, Certina and Tissot. Some 2,500 people work here in the watchmaking sector.

Unfortunately, it is not possible to visit the factories, but there is an exception – and a big one! In 2019, the Campus “La Cité du Temps” opened its doors, a spectacular structure, all in transparency. The architect is the Japanese Shigeru Ban, the same man who built the Centre Pompidou in Metz. The campus houses the headquarters of Swatch and Omega as well as two museums, Planet Swatch and Omega Museum. This futuristic architecture reflects a Switzerland that, through its watchmaking history, has been able to redefine its future 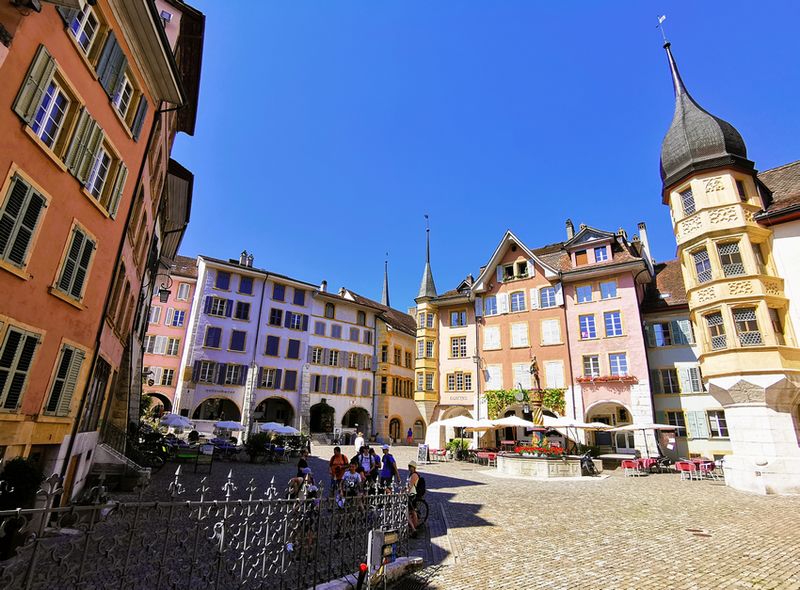 The picturesque historic heart of Biel/Bienne dates from the Renaissance (Photo: Luc Citrinot)

Amelia takes over the Brive axis

What to visit in Seine-et-Marne?