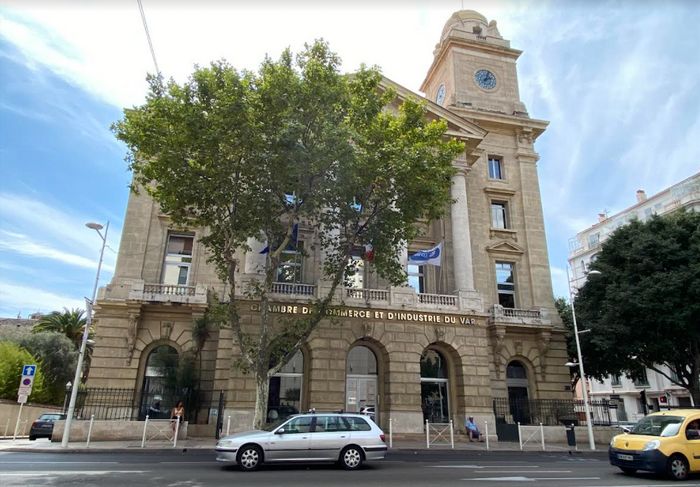 The headquarters of the Var Chamber of Commerce in Toulon

Sylvie Parcineau – Traditionally, the two main business areas are to the east and west of the Toulon conurbation. There’s the Toulon West industrial zone, which covers the communes of La Garde, La Farlède, and part of La Crau. It dates back to the end of the 1960s and continues to expand. It is also at the entrance of this industrial zone that we find the biggest commercial concentration of the department with Grand Var, Grand Var Est, Avenue 83, and a whole offer of important shops for the metropolis. The industrial zone has a number of good companies, particularly in the field of underwater robotics. On the west side, in La Seyne and Six-Fours, there is the Playes area, which hosts production and service companies, and the Technopole de la Mer in Ollioules, which is really the spearhead of the metropolis as far as the sea and defence industry is concerned, but which is also open to other sectors of excellence. Naval Group has established its flagship there. There are start-ups, activities related to marine and submarine onboard systems, which can also be developed in the air or on land. This whole technical ecosystem around the sea is animated both by the Pôle Mer Méditerranée and by System Factory. This type of cluster brings together, on request, companies that come to aggregate technology bricks to come up with tailor-made proposals and meet the expectations of large clients in the defence or civil navy sectors

Are we seeing a diversification of the Toulon economy, or is it still primarily focused on the sea and defence?

Sylvie Parcineau – There is the arsenal of course, but it is not limited to that: maritime techniques are developing on other themes, as is the technological ecosystem. It’s a desire of the city to develop an ecosystem of high-performance start-ups. Chalucet embodies this dynamic in Toulon city centre: this new eco-neighbourhood of creativity and knowledge is the spearhead, the showcase of this ecosystem, strongly driven by Toulon Var Technologies (TVT). There is an incubator, acceleration programs, both in the technical field and in that of culture and knowledge. This is also embodied in the organisation of the Murex festival.

So the installation of an “arts street” in the city centre is not just a cosmetic change? It would underlie a more global strategy, with an economic dimension?

Sylvie Parcineau – Absolutely: it’s not just cosmetic! There is a will to be strongly involved with tools that allow us to feed this Rue des Arts. This district corresponds to the old

The “Chicago” district of Toulon, which has been undergoing urban rehabilitation for fifteen years. The Rue des Arts is now located there, with a range of housing, facilities and services. There are also more and more third places, coworking spaces, etc. The idea in the lower town is for start-ups to find premises and an environment where they can develop in conjunction with several small businesses. There is also a whole dynamic linked to design. So there is an economy that is developing strongly around these themes, supported by the metropolis and TVT.

Is this dynamic already attracting new business travellers and investors from new horizons?

Sylvie Parcineau – As far as culture is concerned, it is an emerging sector, with a development that is still endogenous. We do not yet have an international aura, even if the last Murex event managed to bring together foreign investors, from the Netherlands and the United Kingdom in particular. As for our traditional sectors of activity, linked to the navy and defence, they generate heavy investments and a more solid international recognition.

In France, have you noticed a “telework effect”?

Sylvie Parcineau – Yes, there are many new arrivals in the metropolis. Many real estate agents describe a saturated market. There is a real attraction for employees who come to work remotely.

Could this be a reason to launch new infrastructure projects?

Sylvie Parcineau – The metropolis had already initiated major works that are currently underway, notably to the north of the station where a new district will be delivered in Montéty, with more than 15,000 m² of office space. This project also includes the repositioning of the nursing school. This is also one of the ambitions of the metropolis, which wants to bring students back to the city centre to make it more dynamic and attractive. This was already a desire expressed through the creativity and knowledge district, with the Kedge business school and the Camondo design school.

Is the transport sector also concerned by this wave of transformation?

Sylvie Parcineau – Absolutely, with several areas of work. There is the desire to improve mobility within the city by increasing the density of regional express trains, with a sort of “Toulon RER”. There is also a project for a high service level bus. At the same time, we can also rely on a very good maritime public transport service, which works very well inside the harbour. Finally, there is also the project to improve the new rail line, with the opportunity of a new line between Marseille and Nice. There won’t be a complete new line, but sections that will make it possible to densify the daily transport offer.

A project that will be Toulon’s new showcase

How will this “Toulon RER” project take shape?

Sylvie Parcineau – It will involve the creation of the Sainte-Musse stop, the renovation of the Pauline station in La Garde. There is also the desire to rely on a station to the west of the agglomeration, in Saint-Cyr-Sur-Mer. The project is therefore very broad, from Saint-Cyr to La Pauline, and even Solliès-Pont, where the station could be the gateway to the east. At the maritime level, there is also the great project of Mayol in Pipady, with notably a new cruise pier, and projects of urban recomposition on the whole section which goes from the rugby stadium to the Royal Tower. We are waiting for the results of the urban planners’ competition which has been launched. It is a big project, which will require time, with a ten or fifteen year vision, on a project which will be the new showcase of Toulon.

Are all the projects confined to the Toulon metropolis, or do the other towns in the department also manage to attract companies?

Sylvie Parcineau – Toulon accounts for 60% of economic activity, but it is not the only driving force in the department. There are also developments in other areas, each with its own specificities. Whether it’s along the A8 motorway around Brignoles, towards Le Luc and Le Cannet on the “Coeur de Var”, or at the entrance to the Dracénie, with areas that are also attracting companies and land offers that are being built.

What about business tourism? A destination like Toulon must have a card to play in the MICE sector…

Sylvie Parcineau – The metropolis has dedicated facilities, such as the Palais Neptune, the Palais du Commerce et de la Mer and the Hyères Casino: there are structures for hosting events of various sizes. We work well with Provence Côte d’Azur Events to identify opportunities to organize trade shows, for example around hydrogen, which is also a strong element of the territory in terms of economic development, both in the land and maritime sectors.