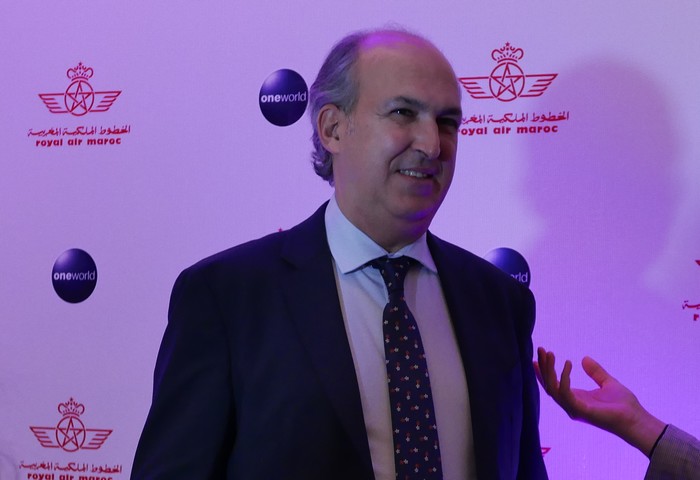 Karim Benchekoun, CFO of Royal Air Maroc, during the event organized on March 25 in Nigeria with oneworld (Photo Florian Guillemin)

By coincidence, Royal Air Maroc is celebrating its integration into oneworld and its arrival in Tel Aviv in March. Is it possible to prioritize these two major events?

Karim Benchekoun – We had integrated Oneworld in April. Unfortunately, the health crisis passed by, and we were unable to celebrate this event. So we postponed it. But it was very important for us to mark this integration by organizing events in Africa: in Morocco of course, but also in Abidjan, Lagos, and probably in two other African countries in 2022. As for Tel Aviv

, it is of course not a route like any other: it is charged with emotion, knowing that our fellow citizens who live in Israel will be able to come on direct flights. Both events are therefore of great importance, and carry a great deal of weight in the commercial strategy of Royal Air Maroc.

We have much to gain by being part of one of the world’s most beautiful alliances, made up of prestigious airlines

Royal Air Maroc has therefore become the first African airline within Oneworld. Why so late?

Karim Benchekoun – It is a very long process. We have been discussing with Oneworld for several years. Each of the member airlines of the alliance has its own constraints, its own strategy. Perhaps the timing was not previously conducive to the integration of RAM, but in 2018 we received the official invitation to join Oneworld, especially because it became important for the alliance to have such a presence on the African continent in a very pronounced way. And Royal Air Maroc brings an answer to this need to position itself on the continent in a strong way. We have a lot to gain by being part of one of the most beautiful alliances in the world, made up of prestigious airlines, with all the benefits that this represents for our customers, and for us in terms of process, because the quality of services provided by each member airline must be similar. Linking the networks of each airline also offers very interesting perspectives. Being able to check in a bag in Casablanca and pick it up on the other side of the world, using miles from one airline to get an upgrade on another airline: these are very important benefits for travelers, especially the most frequent business travelers

Routes to and from Morocco will be back on theThe company will reach its pre-crisis cruising speed by the end of 2023, or early 2024

In what situation is Royal Air Maroc today, after a particularly long crisis, with the closure of the borders until February?

Karim Benchekoun – Since the reopening of the borders, demand has picked up in a very interesting way. Lines to and from Morocco will return to their pre-crisis cruising speed by the end of 2023, or early 2024 I think. Of course the crisis has left its mark on the financial situation, and we are trying to remedy this as much as possible. But it has also been an opportunity to restructure many things within the company. We are now better equipped than before the crisis to ensure the development of Royal Air Maroc and prepare for the future.

Does the recovery also concern business customers, particularly on the Morocco-France route?

Karim Benchekoun – Business travel has not really recovered. This is a general trend among all airlines worldwide. The Morocco-France route is the most important for us in the business travel segment, and we are still quite far from 2019 levels, even if business travel is gradually picking up. As IATA has indicated, it will take four or five years for companies to return to pre-crisis levels in business travel.

The African business travel market is often presented as a market of the future. Do you share this conviction, even in this unprecedented context?

Karim Benchekoun – We hope so! We have a very important African network, which we are developing and enriching. We have a good business class, both on medium-haul and long-haul aircraft. RAM therefore has real assets to capture a significant share of this business traffic. From and to Morocco, this activity is picking up. Many Moroccan companies are present in Africa, in the banking, insurance and construction sectors, and are gradually resuming travel. African businessmen are also starting to travel again, not only to Morocco but also beyond our hub in Casablanca. So there is a positive dynamic. We need to distinguish between two types of business travelers: there are the employees of large multinationals, whose travel budgets have been significantly reduced, and whose managers have become accustomed to organizing remote meetings

. The frequency of their travel will be reduced for some time. But there are also small and medium-sized companies, where only two or three people travel. According to our analysis, they will have to continue to travel because they don’t really have a choice. In this area, I think that activity levels will pick up fairly quickly.

We imagine that the modernization and reorganization of Casablanca airport should allow you to look to the future with optimism, perhaps with the ambition to extend the influence of your hub, towards East Africa?

<p>Karim Benchekoun – Exactly. For an airline to develop, it needs an adequate base. There has been a lot of work and redevelopment within the Mohammed V airport. Today, we have a beautiful airport, which meets our needs and which will even grow more in the next four or five years. In any case, we now have a platform that allows us to treat the customers of RAM and our partners at the level of service quality standards of the Oneworld alliance.

United Airlines to return to Nice in spring 2022