Hotels: address book where to stay and organize a meeting

With the MECA as its neighbor, the Hilton Garden Inn has been part of the future of the Euratlantique district since 2018

. Close to the headquarters of numerous companies, the hotel of the American group’s mid-range brand is naturally oriented towards business clients, while being ideally positioned for leisure travelers due to its proximity to the Saint-Jean train station. With a contemporary design that is both friendly and functional, the hotel has 166 rooms of good size – 24 m2 – all equipped with a desk and large screen television. Among them, 9 junior suites and 9 other suites, one of which has a terrace and whose living room lends itself to meetings in complete discretion.

However, the Hilton Garden Inn Bordeaux Centre offers many other places to organize professional meetings with three meeting rooms located on the first floor, all with daylight and extended by an outdoor space. On the second floor, the hotel has a 155 m2 seminar room with a capacity of 130 people and two terraces, in a vaulted architecture reminiscent of the old slaughterhouses in the area. Also of note is the presence, in the hotel lobby, of an airport lounge-style business corner, where business travelers can work in peace and quiet, for example while waiting for their train, at no extra cost. Among other useful services for business trips, the hotel has a laundry and a fitness room. As for the Babette restaurant, guests can enjoy friendly cuisine based on local products 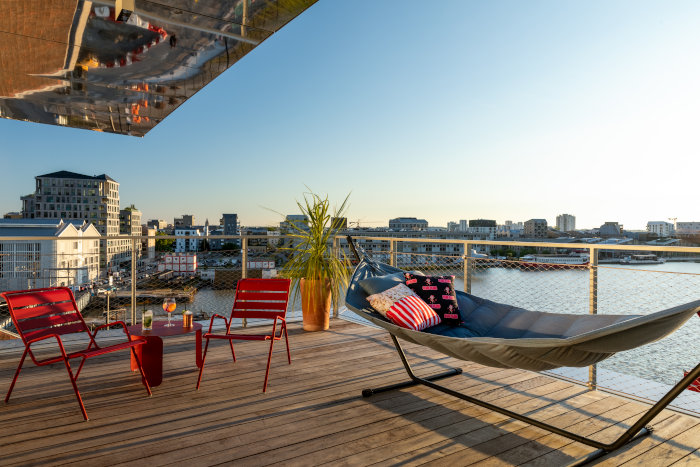 , the high-tech business district of Bassins à Flot still had only a limited hotel offer. Business travelers, as well as participants in events at the nearby Cité du Vin, now have two new and beautiful options for staying near their meeting place.

The Marriott group has installed two of its brands – Renaissance

The Renaissance is located on the site of a former Lesieur factory, whose eight silos have been preserved in the conversion project. Two of them, 35 meters high, offer the Renaissance an impressive entrance, all elegance and verticality. The hotel has 149 rooms overlooking either the basins or the Garonne, but all decorated in the same way, organizing a dialogue between raw materials, wood and concrete, velvet and brass.

For meetings, the Renaissance has a 250 m2 room on the first floor, divisible into two or three spaces as needed, and extended by a terrace overlooking the former halles de Bacalan, converted into a trendy restaurant. However, participants and hotel guests do not have to leave the hotel to find a quality table with the Italian restaurant Gina on the top floor of the hotel. The Renaissance is characterized by its rooftop offering an unparalleled view of Bordeaux and the Cité du Vin, whether from the restaurant and its terrace on sunny days, the adjoining bar, but also the hotel pool, hidden behind the bar. Also noteworthy on this floor is a wine cellar that can be used for tasting workshops, but which can also be converted into a VIP meeting room and privatized for exclusive dinners.

Residents of the neighboring Moxy can also take advantage of these facilities. Connected to the Renaissance by a pleasant garden, the hotel perfectly integrates the brand’s lifestyle concept in a neighborhood that reflects its image, with its bar-reception and coworking table in the lobby and its street art and industrial decoration. The Moxy offers a total of 133 rooms of 17 m2, six of which, on the rooftop, stand out with their terraces that are almost as big as the rooms 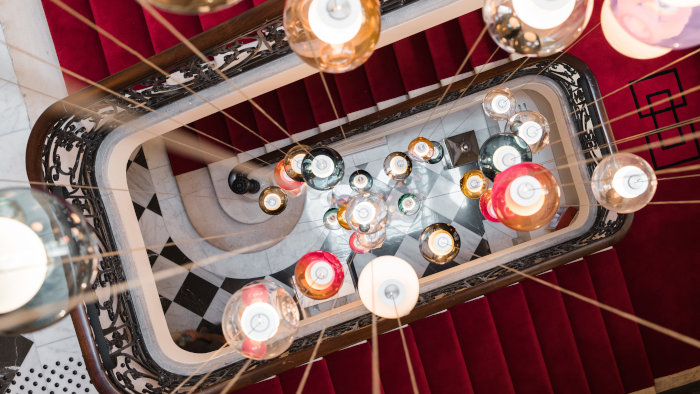 Discretion, cosy elegance, a personalized welcome: since it opened last year, the Villas Foch hotel has won over a clientele of regulars, particularly executives, who are attracted by the intimate atmosphere and attentive service of this luxury hotel. Close to the Place des Quinconces and the Jardin Public, this new five-star hotel is the result of the merger of two private mansions that once housed the Franco-British maritime consignment company and then the offices of banking companies.

The place, remarkable for its modern and monumental chandelier running down the length of the staircase, offers only 20 rooms with a decor that mixes contemporary with an inimitable elegance.

all with a desk and decorated with Hermès products in the bathrooms. Of its 20 keys, the Villas Foch has eight prestige rooms, including junior suites decorated with beautiful fireplaces and the Foch suite, the largest in the hotel, with parquet floors and ceiling moldings, king-size bed and adjoining living room.

For moments of relaxation at the end of the day, the hotel also offers a 100 m2 wellness area in the basement, under a vaulted cellar, with a swimming pool, sauna and fitness center. Although the Villas Foch does not have a restaurant due to its proximity to the many restaurants in the center of Bordeaux, its wine and cocktail bar, Le Ferdinand, is both intimate and trendy, and offers tapas with its drinks. This bar, like the breakfast room installed under a glass roof, can be transformed into an informal meeting room for seminars of up to 15 people in an exclusive setting 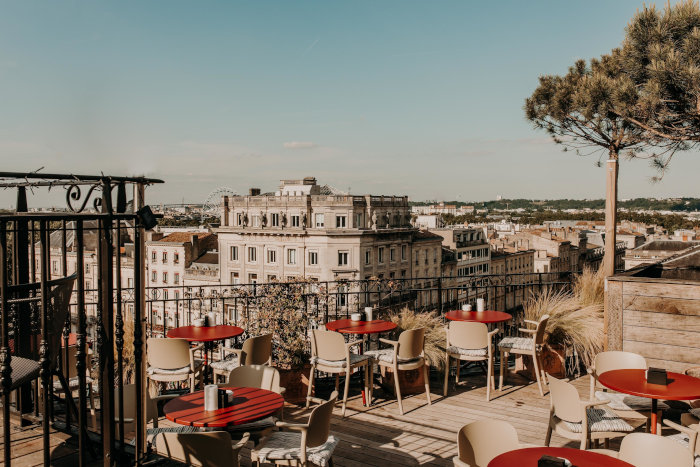 Its name says it all about the pre-eminent place that Le Grand Hôtel occupies in Bordeaux’s hotel offer, the elegance of the place, and its privileged location in the heart of the city, a stone’s throw from the Allées de Tourny. The harmony of its neo-classical façade with that of the Grand Théâtre, which faces it, is not accidental, since both have the same architect, Victor Louis, who designed this private mansion on the outskirts of the Revolution for its wealthy owner Sacriste de Rolly.

With its chandeliers and gilding, its mirrors and painted ceilings, as well as its windows overlooking the theater and the Place de la Comédie, the Sauternes room of the Grand Hotel evokes the trace of this prestigious past. Suitable for exclusive receptions, banquets or wine tastings, it is obviously the jewel in the crown of the InterContinental Bordeaux’s meeting space. On the second floor of the hotel, a series of more contemporary and flexible meeting spaces – 13 lounges in all – are arranged over 1,000 m2, in addition to five foyers ranging from 55 to 120 m2. The beating heart of the hotel, very lively at tea time, the Orangery bar can also be privatized and host a welcome drink under its glass roof for large seminars, as well as chic cocktails and fashion shows, among other high-end events.

Decorated by Jacques Garcia, the hotel opened its doors in the mid-2000s under the Regent brand, before being taken over six years ago by the luxury brand InterContinental. With its 130 rooms, including 44 suites, the hotel is an upscale pied-à-terre, also

The hotel has a strong focus on gastronomy with its brasserie, Le Bordeaux, which can accommodate groups of up to 120 guests, and its two-starred restaurant, Le Pressoir d’Argent, supervised by British chef Gordon Ramsay.

The hotel also stands out for its wellness area on the top floor, rather than in the basement as is often the case, with a Guerlain spa with a rooftop Jacuzzi in fine weather. These fine days are ideal for enjoying the hotel’s rooftop, which is also now accessible year-round with a bubble that can be privatized for meetings, confidential lunches or cocktails. Note that the hotel received its green key label last year 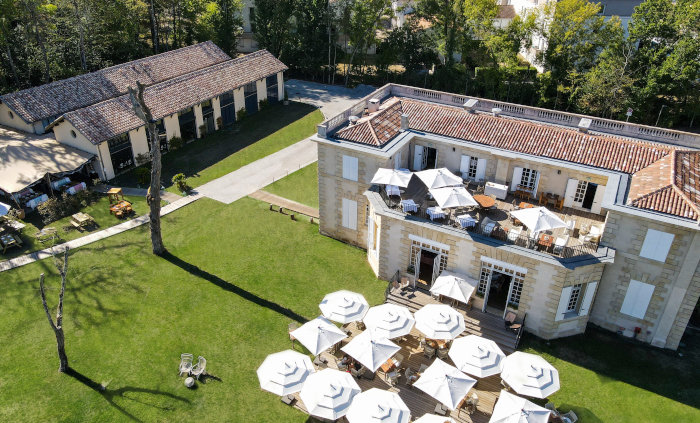 So far, so close to Bordeaux. Located in Talence, on the outskirts of the city, the Domaine de Raba is not, far from it, the preferred hotel for business travelers with its five rooms and four atypical African lodge-style tents. Unless you want to combine business trips and relaxation, to take a break in a green setting. On the other hand, the hotel offers business groups a multitude of options for seminars and executive committees as in the middle of nature.

The place, originally the castle of the Raba family, rich Jewish merchants exiled from Portugal in the 18th century because of the Inquisition, was in turn a hospital, an orphanage and a children’s home. Its outbuilding, a pavilion designed to accommodate the family’s distinguished guests – Napoleon and Josephine de Beauharnais in their time or Beaumarchais – is still intended for high-end hospitality. The Millésimes group took it over and since 2018 offers a cosy and warm hotel enhanced by three restaurants, a bar and a wellness area.

Whether it is the brasserie Les Petits Caprices as the restaurant specializing in matured meats, the more intimate Marguerite, or the bar-club Contre-jour in the library, all these spaces can be privatized and adapted to corporate events, all of which are extended by terraces in fine weather.

In its park, the Raba estate also has a wing that houses the five bedrooms, but also a whole range of seminar facilities with a room for 80 people and, just next door, a 50-seat cinema with comfortable sofas. The whole is extended by a restaurant with ephemeral themes, becoming a mountain refuge in winter for shared raclettes or fondues. Always in a friendly spirit, its atmosphere turns to the beach in summer, with pierrade and cocktails

Puy du fou : the history of France on show