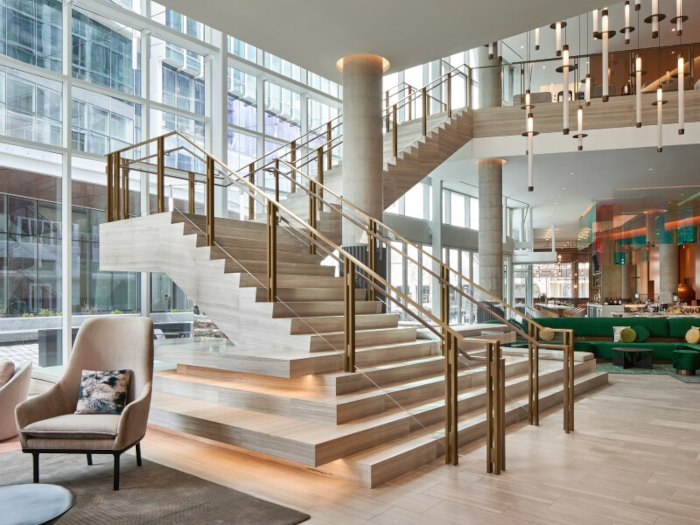 The Marriott Bethesda Downtown at Marriott HQ, the 8,000th hotel of a fast-growing American group.

While Marriott has just opened its 8,000th hotel in the world – quite a symbol since this hotel is located right next to the group’s future new headquarters in Bethesda, a suburb of Washington – the American group remains the leader in the hotel industry worldwide with nearly 1.5 million rooms. This is much more than Hilton and its one million rooms and almost twice as many as Accor, which announced a hotel inventory of nearly 775,000 rooms at the end of last year.

With a 3.9% growth in its offer last year, the world’s leading group is demonstrating that it is still developing strongly despite the crisis. Nearly 86,000 rooms have been added to its network in 2021, half of which will be international and a quarter from the conversion of existing hotels.

Marriott is far from being the only major hotel group to have expanded its offer last year. Hilton’s room supply grew by 5.6% in 2021, Accor’s by 3% with organic growth of 288 hotels, while Wyndham

, whose development model is based almost entirely on franchising, like Choice Hotels, announced a 2% increase.

In this panorama, two groups – IHG and Hyatt – stand out in their own way. The first, long the world’s largest group before Marriott absorbed Starwood in 2016 and the Chinese group JinJiang made a name for itself in the sector, has been showing some stability in its network worldwide for the past two years. Not that the British hotelier is not in the same dynamic as competitors, since its gross growth is reaching identical levels, at +5.0% compared to 2020. But its desire to strengthen the consistency and quality of two of its major brands, Holiday Inn and Crowne Plaza, which have been engaged in a contemporary update of their establishments for several years, has pushed out a number of hotels that are not aligned with these improvement plans, particularly across the Atlantic.

Of the 50,000 rooms, nearly three-quarters were in hotels owned by these two brands. With this strategy almost complete, IHG now intends to return to growth in its portfolio at a rate close to 5%. To get back to these levels, the British group is counting on the attractiveness of Voco

to convert more and more existing hotels to this brand, as well as on the dynamism of Holiday Inn Express in the economy segment, and in the luxury segment, on the quality of its hotels.e, on the urban expansion of its Six Senses resorts brand and the growth of the Vignette Collection.

As for Hyatt, while its offering does not rival that of the world’s leading groups in terms of numbers, with “only” 285,000 rooms and just over 1,000 hotels, the quality of its high-end hotels makes it a major rival. The group has seen a record number of openings in 2021, due to the growth of its brands (+6.1%), but especially with the acquisition of the ALG group and its 99 AMR Collection resorts. Thanks to the acquisition of this leisure player, Hyatt has seen its hotel portfolio grow by nearly 20%. “2021 has been a transformational year for our company,” said Mark Hoplamazian, CEO of Hyatt Hotels Corporation, whose strategy targets three segments in particular: luxury, lifestyle and resorts. Through internal developments and acquisitions such as ALG and, in 2018, Two Roads Hospitality, parent company of the Alila, Joie de Vivre and Thompson brands, Hyatt will have doubled its luxury offering and tripled its share of resorts and lifestyle hotels in four years.

Lifestyle hotels were already attracting interest from hotel groups before the pandemic, and this segment is increasingly popular as business travel takes a downturn. Meeting the expectations of all travelers, both leisure and business, this contemporary hotel also stands out for its lively bars and restaurants, making the venues attractive to local customers. Hence the ability to generate higher revenues.

In this context, Accor, like Hyatt, is aligning its development strategy with this new trend. The formation in 2021 of the Ennismore joint venture, whose ambition is to be the world’s largest lifestyle hotel operator, should further accelerate this development. ” Our pipeline has continued to grow, with our Luxury & Upscale segment now accounting for nearly 40% of future openings, an increase of 12 percentage points over the past four years

,” said Accor CEO Sébastien Bazin. At the end of December 2021, the French group announced more than 1,200 hotels in the pipeline and anticipated a net network growth of 3.5% for the current year.

The pandemic has in no way affected the growth capacity of the major hotel groups, especially since most of their projects had been initiated before the crisis. During the presentation of his analysis of hotel industry results in 2021, Olivier Petit, partner at In Extenso, noted a real dynamic in France with a record number of openings in the regions in 2021 and significant prospects for new openings, particularly in Paris with 6,000 new rooms expected in 2022. While expecting a slower pace in the coming years: “Hotels take several years to open, so we can expect a certain gap in three or four years due to the pandemic

A host of projects already underway

Meanwhile, hoteliers still have well-stocked “pipelines”. Hilton has announced a pipeline of 2,670 hotels at the end of December, more than half of which are expected to be outside the United States, with the American group entering 28 new territories. This means a volume of rooms – 408,000 – close to that of Marriott, which announced 2,831 hotels and 485,000 rooms in the pipeline. ” With our momentum around hotel conversions and the largest pipeline in the industry, we are optimistic about our ability to grow our footprint over the next few years,” said Anthony Capuano, Marriott’s CEO. For 2022, we expect gross room growth approaching 5% and deletions in the 1% to 1.5% range, resulting in net growth of 3.5% to 4%

.” Enough to comfortably establish its position as the global leader for at least some time to come.

Wellness appointment at the Crillon Hotel