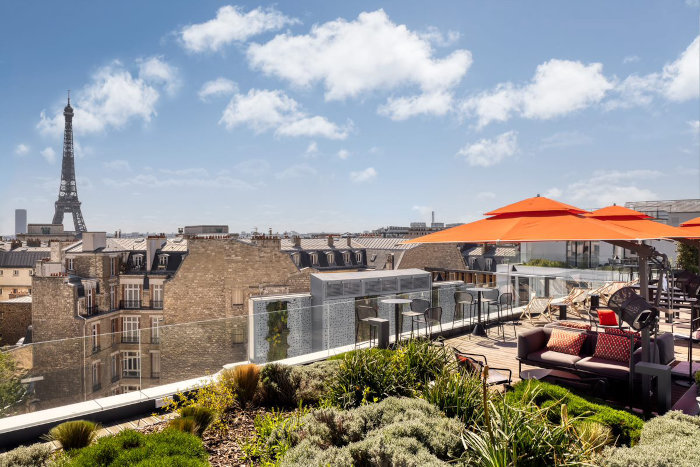 Rooftop of the Canopy by Hilton Paris Trocadero.

Already on a good development momentum in France, the Hilton group intends to accelerate the pace in the coming years. The American hotelier plans to open more than 20 new hotels in France over the next few years, in addition to the 19 hotels currently in operation. “In the past 12 months, despite challenging market conditions, Hilton has opened six hotels in France, ranging from exciting brand entries like the Canopy by Hilton Paris Trocadero to new regional market openings like the Hilton Garden Inn Tours Centre

This strategy, which focuses on both the French capital and provincial cities, has taken shape in recent months with the opening of the DoubleTree Lyon Eurexpo and a Hilton Garden Inn in Le Havre, as well as the entry of the Tapestry Collection by Hilton into Paris last September, with the Camille Paris Gare de Lyon hotel

. The Tapestry Collection will continue to expand in Paris in the coming months with a new hotel in the 16th arrondissement, Le Belgrand Hotel Paris Champs Elysees, while, among the openings expected in 2022, the American hotelier is preparing a fourth address in the Paris region for its flagship Hilton Hotels brand with the Hilton Paris Tour Eiffel, located on Avenue de Saxe.

As for upscale hotels, the Curio Collection by Hilton will be opening a hotel in Hyères later this year, Le Hameau des Pesquiers Ecolodge, with direct access to the beach. Also in the French provinces, the American group also has two projects in Dijon, in partnership with the Naos group, with a low-cost lifestyle hotel, Hampton Inn, and an upscale hotel, Curio Collection, located in the future Cité Internationale de la Gastronomie et du Vin, within the walls of the former Hospice Sainte-Anne.

While France is one of the key markets for Hilton in Europe, the American group’s development is spreading throughout the region, with the hotelier preparing to pass the 500 hotel mark this year. ” We plan to open more than 60 hotels by the end of 2022 throughout Europe, while in the longer term, 237 hotels will be added to our European portfolio

,” said Patrick Fitzgibbon. Among the This year, the Hilton Rome Eur La Lama, a large business hotel connected to the La Nuvola convention center, is expected to open, as well as the Conrad Chia Laguna Sardinia and Hilton Mallorca Galatzo resorts, which are more leisure-oriented.