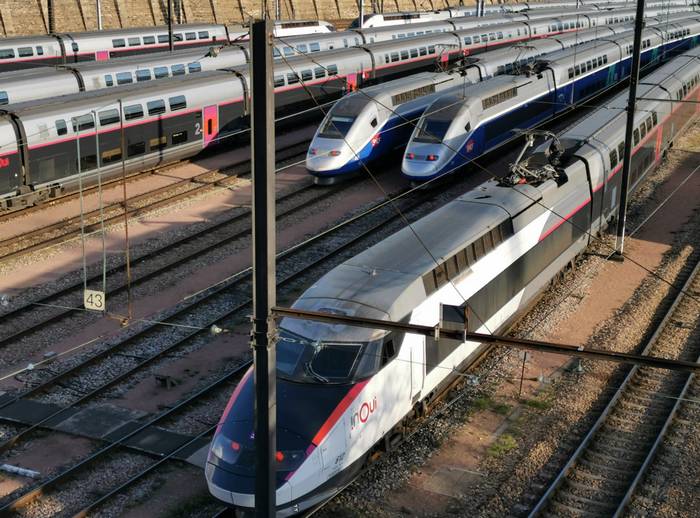 TGVs along the tracks of the Gare de Lyon in Paris (Photo: Luc Citrinot)

According to the International Union of Railways (UIC), in 2020 there will be just over 56,000 km of high-speed rail lines worldwide. The UIC defines high speed as trains running at least 250 km/h on new lines and 200 km/h on existing lines.

The majority are concentrated in Europe (13 countries) and Asia (7 countries if the Near and Middle East is included). Laos is the latest to join the club with the opening of a high-speed line in December.

There will be many more in the coming years. The UIC has identified concrete network construction projects in five new countries in Europe (Estonia, Latvia and Lithuania, Czech Republic and Serbia).

In Russia, the performance of the Sapsan high-speed train, linking Moscow to St. Petersburg or Nizhny Novgorod, is slightly below the official UIC definition. While the trains can reach 230 km/h in top speed, they average 180 km/h. Connecting the main cities of the country in 3h40, the average speed is 180 km/h. However, a modernization project should enable trains to run at up to 350 km/h, reducing the journey between the two Russian metropolises to just over two hours. And to put Saint Petersburg and Nizhny Novgorod at less than 3h30. According to the UIC, the train is expected to enter service around 2024. It should be noted that a high-speed train also links St Petersburg to Helsinki in 3.5 hours.

In Africa and the Middle East, Egypt has launched the construction of a railway line in partnership with Germany for the Cairo-Alexandria line. The first part of the line is scheduled to open in 2023 and the entire 650 km of track in 2027. Another major project is taking place in Iran with the first line linking Tehran to Isfahan, a distance of 450 km. The work should allow the line to open soon, in 2022 or 2023. A second line is also under construction between Arak and Qom, a total of 1,336 km. Both projects are being carried out with China.

Other projects are in the pipeline in Brazil, Canada, between Doha (Qatar) and Manama (Bahrain) and Mexico. There are also projects to develop existing networks in Germany, Spain, France, Italy, Poland, the United Kingdom, Sweden and Turkey. Two important projects are the Bordeaux-Toulouse-Dax high-speed line in France and the Berlin-Prague line via Dresden.

According to the UIC,

The high-speed rail network is expected to grow to over 76,500 km of track by the end of the decade. Europe should see an additional 2,400 km of high-speed trains. So high speed does have a future, even if, paradoxically, projects can sometimes be implemented at a snail’s pace!

See also  What to visit in Seine-et-Marne?

An Eklo hotel expected at the Porte de Versailles in 2023

A Inside Look at the First Black Travel Consumer and Trade Expo (U.S.)