Envergure project: the hotel conversion of an A380 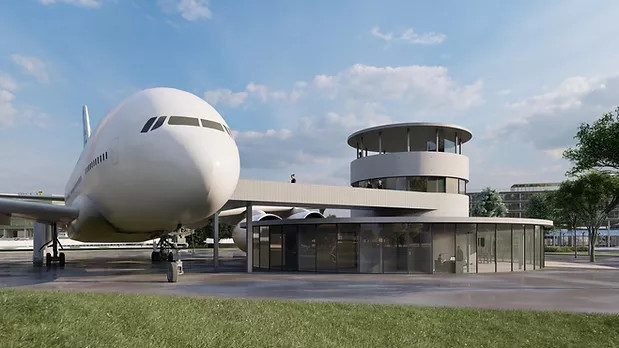 In Toulouse, the Envergure project intends to convert an A380 into a hotel with 31 rooms and suites.

Is recycling in the air? Certainly, the idea is gaining ground every day for everything that is furniture, clothing, plastics and other used materials. In this desire to upcycle, the Envergure project is thinking even bigger. While the Airbus A380 is being pushed into retirement by many companies

, Frédéric Deleuze intends to give a second life to one of these aircraft that are destined to be dismantled. Based in Toulouse, this former engineer of the aircraft manufacturer has set as a career conversion his transformation into a three-star hotel with 31 rooms and suites.

While the hotel is expected to open in 2024, the project is currently only in the technical and economic feasibility phase, with conclusions expected by the end of the first quarter. ” We are also waiting for the approval to obtain the land, which should arrive within the same timeframe

,” explains Frédéric Deleuze. The land is perfectly in line with the reconfiguration of an A380, since it is located in the aeronautical activity zone, in the northern part of the Toulouse-Blagnac airport and in the immediate vicinity of the Aeroscopia museum.

The future hotel naturally targets curious tourists and aviation enthusiasts, but also a large business clientele due to its location in the heart of a business zone and its proximity to the new MEETT exhibition center. “According to the market studies carried out and the discussions I have had, we can say that B2C and B2B will be in the order of 50-50

,” says Frédéric Deleuze, who has surrounded himself with friends specializing in architecture and the hotel and restaurant business to develop this project, which is also supported by the Toulouse Chamber of Commerce and Industry and the Occitanie Tourism Fund.

Active retirement for an A380

To complete the experience, the Envergure project will add to the hotel-airplane a bistronomic restaurant with 60 seats in a building that is a metaphor for a control tower. Offering a reduced menu based on local and seasonal products, the place will be extended by a large terrace with a view of the A380, all of which can be privatized for professional events. “The concept lends itself well to this!

As original as it is, his idea is not totally new, as the world has half a dozen examples of aircraft hotels. These unusual experiences range from an old B727 that has been permanently installed in the heart of the Costa Rican canopy – the Hotel Costa Verde – to an Ilyushin from the

In the Netherlands, a former East German company Interflug was transformed into a luxury suite at Teuge airport, while in New Zealand, a Bristol Freightor from the Vietnam war was used. Closer to home, the Haut-Village campsite in Saint-Michel-Chef-Chef also specializes in such conversions, with two small aircraft, a Skylander and a Grumman Gulfstream, turned into family accommodations, while in Xertigny, in the Vosges, a former Corsair Caravelle has been converted into a loft for up to eight people.

Did all these ideas inspire the former Airbus engineer? Things went the other way,” he explains. I first imagined the concept and then looked to see if other things were being done on an equivalent model.

” Nothing among these leisure-oriented examples has the scale of the Toulouse project, except for another that comes close in location – Stockholm Arlanda Airport – and the size of the aircraft: a Boeing 747 bearing the Singapore Airlines pennant in the 1970s. 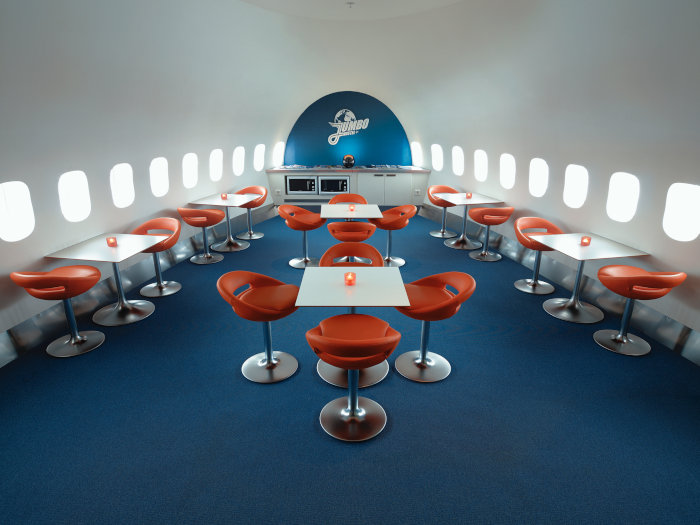 The JumboStay at Stockholm Arlanda Airport.

Opened in 2009, the establishment, called Jumbo Stay, has, like the Toulouse project, about thirty rooms. However, most of them are dormitories with four beds, like a youth hostel, with a limited number of rooms offering a private shower and toilet, including the suite installed in the cockpit of the 747.

” The business model is different, as the Jumbo Stay is more of a backpacker,” says Frédéric Deleuze. The Airbus A380 offers a much larger surface area than Boeing’s giant of the sky, and its fuselage will be able to house rooms ranging from 16 m2 to 23 m2, compared with only 6 m2 for the JumboStay dormitories. All of them will offer the comfort expected by business travelers with queen-size beds, desk space, private bathroom and toilet. For even more comfort, the project also includes two suites of approximately 35 m2: the Cockpit Suite, fitted out as its name indicates in the cockpit of the aircraft and equipped with a bathroom with bathtub, and the Duplex Suite, at the rear of the aircraft. Using the original staircase of the A380, it extends over two floors and includes two bedrooms, a bathroom with toilet and an office area.

How to meet people while traveling?