Eklo to open three hotels in Toulouse, Lyon and Roissy in 2022

The Eklo group intends to make a place for itself in the urban hotel industry with an offer that is both economical and ecological – with eco-designed buildings, low-energy operation, short circuits and waste reduction, among other things -, all of which is also driven by a design and lifestyle spirit. From six locations to date – in Bordeaux, Clermont-Ferrand

, Le Havre, Le Mans, Lille and Marne-La-Vallée – the offer will increase to nine establishments by the end of next year with openings expected in Lyon, Toulouse and Roissy. Announced last year, these projects are now taking on more substance.

Next April, an Eklo will appear in Toulouse, as part of the development of the Cartoucherie eco-district. The ecological dimension of the brand will be amply demonstrated, since the hotel will be housed in a wooden tower, the Wood’Art tower, 76 metres high. Easily accessible by line 1 of the tramway, the Eklo Toulouse will offer 100 rooms and large common areas. 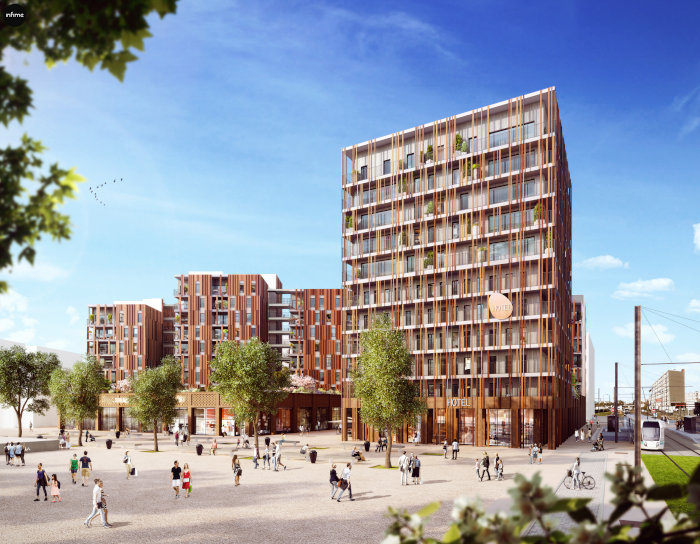 Later in the year, in the fourth quarter, the brand will set up shop in Lyon, again in the rapidly developing Grand Parilly district. Located in the 8th arrondissement, at the junction of Lyon and Vénissieux, this urban project includes housing and offices, shops and, of course, vast green spaces and a green corridor running through the district. It is in this contemporary environment that the Eklo Lyon will offer 110 rooms for a hotel that is intended for tourists as well as business travelers with its meeting rooms and accessibility. Served by metro D and tramway line 4, the district is connected to Lyon Part-Dieu station in about 15 minutes.

Also at the end of 2022, Eklo will offer a hotel also targeting the business clientele, since it is located ten minutes from Paris CDG airport, but also from the Villepinte Exhibition Centre. With its 150 rooms, meeting rooms and restaurant with terrace, the hotel will be a low-cost stopover between two business events.

vions or at a trade fair in Villepinte. Located in the Roissy Sud urban development zone, this new building benefits from the latest standards in terms of eco-responsibility, classified A for its environmental impact and equipped with photovoltaic panels for electrical self-sufficiency.

These projects are part of the ambitions of a group that plans to reach a portfolio of some forty hotels in the next ten years, mainly targeting the main French cities. Several new Eklo hotels are already in the pipeline, with one expected in Montpellier in 2023 and two others in the Paris region in 2024, including one near the Porte de Versailles.

SNCF boosts its Business Première offer on the Paris-Lyon route