Edition: a luxury and lifestyle resort in the heart of Madrid 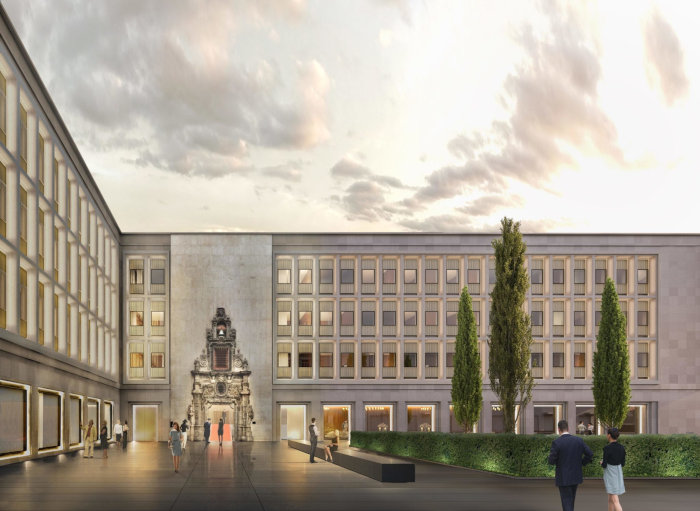 With its lively restaurants and bars and contemporary design, upscale lifestyle hotels have a natural place in Madrid, a city renowned for its urban and nightlife scene. In this context, while Hyatt has justannounced the arrival of its Thompson brand in the middle of the year

, the Spanish capital is already undergoing a new development with the gradual opening of an Edition hotel, before opening fully to customers in March. Both luxurious and trendy, this brand is the result of the association of the Marriott Group and Ian Schrager, the pioneer of the boutique hotel wave, and adds with this hotel a second address in Spain after the one offered since 2018 in Barcelona.

Located in the heart of Madrid’s life, in the district of Sol, a stone’s throw from the Plaza Mayor and Gran Via, Edition Madrid is housed in a modern and sleek building that formerly housed the foundation of the Mont de Piété and whose facade is decorated by a decorative baroque portal of the eighteenth century. A place revisited in a contemporary way by two architects, the establishment plays on the complementarity of opposites by mixing the approaches of John Pawson, all elegance and purity, and that of François Champsaur, for an arty and original touch.

This is not just a hotel,” said Ian Schrager. It’s more than just a place to stay. It’s a true hub of popular culture, entertainment and social interaction that is a microcosm of the best of Madrid and perfectly captures the spirit and essence of the city

.” Indeed, Edition Madrid has all the makings of a luxury urban resort with its 200 sophisticated rooms, including 23 suites, but above all its dining and entertainment venues that intend to make a name for themselves in Madrid life.

To do so, the lifestyle hotel has partnered with two star Latin American chefs, whose tables are ranked among the 50 best in the world, to design two inventive culinary concepts. The Jeronimo restaurant, led by Enrique Olivera of Pujol restaurant in Mexico City, features cuisine heavily influenced by Mexican culinary roots, such as the Fideo Seco, made with vermicelli, black beans, cream, cheese and onions. The restaurant faces the street and will soon be extended to include a terrace on a large private square decorated with greenery.

Still outside, but perched on the roof of the hotel, in a garden with a vine-covered pergola, the terrace of the Oroya restaurant offers relaxing moments with a view of the city. This table, designed by Peruvian chef Diego Muñoz, of the Astrid y Gaston restaurant in Lima, plays on casual tapas and dishes to share, blending Peruvian culinary traditions with those of other countries.

ian, African, Italian and Asian influences. The hotel’s rooftop terrace is distinguished not only by the Oroya, but also and above all by its swimming pool, the largest rooftop offered in Madrid and surrounded by some 60 deckchairs and 10 cabanas.

The urban resort approach is also reflected in the hotel’s gym and wellness center, as well as its nightlife. However, the hotel’s entertainment is mainly concentrated around its lobby, with a cocktail bar, the Lobby Bar, and another bar, the Punch Room, where you can have a cocktail or a nightcap accompanied by contemporary Asian bites such as grilled octopus wonton with chili sauce. Tapas in an Asian version that can also be offered for banquets.

See also  Cannes invests in MICE to maintain its standing

Because Edition Madrid does not focus its offer on relaxation, but also has a business travel dimension with a space dedicated to meetings and events, with natural light, consisting of a large ballroom on two floors, a conference room and three studios with partitions for custom configurations.

New Sandals Resorts in Jamaica, and Other Updates from the Brand

A Courtyard and Residence Inn bimarque complex at Paris CDG