Corporate efforts to reduce emissions under scrutiny by T&E 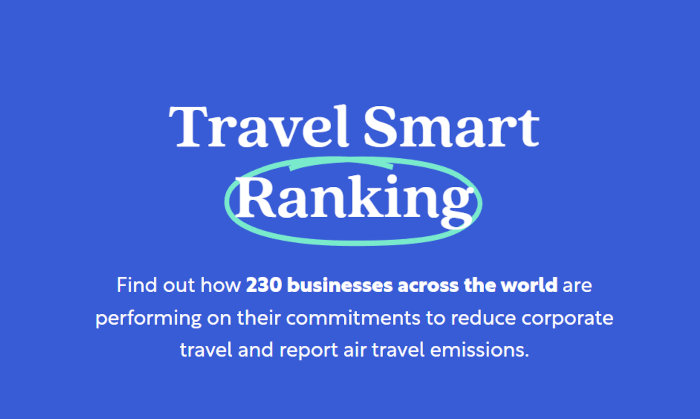 Transport & Environment has published a ranking of companies related to carbon emissions from business flights.

the business travel of 230 American and European multinationals, together with the environmental organization Stand.earth. Its verdict: they can do much better.

Indeed, the analysis shows that 193 companies did not act ” with sufficient speed and ambition to reduce emissions linked to business travel

“, notes T&E. The ranking is based on nine indicators related to emissions reduction targets, reporting and air travel emissions. And, as always, this ranking delivers its share of awards and dunce caps. For example, out of 230 companies, only eight received the highest score of A. This means that all eight companies have committed to a clear reduction in air travel, some of them aiming for a reduction of 50% or more by 2025, and have also been reporting their emissions from business travel or air travel for over a year. The Danish pharmaceutical company Novo Nordisk was the first to report, ahead of several financial and consulting companies such as Swiss Re, Legal & General, Zurich Insurance Group – which has committed to reducing business travel by 70% by 2022 -, Lloyds Banking, Ernst & Young, as well as a French bank, Crédit Agricole.

See also  The recovery is confirmed for the major hotel groups

A total of 21 French companies are included in this ranking, some of which have set clear objectives for reducing their travel and are rated B, such as Cap Gemini, AXA, BNP Paribas and Dassault Systèmes. However, for the other 16, T&E believes that they “do not meet enough criteria and are lagging behind in terms of objectives or reporting on business flights

.” While Engie is among the companies ranked at the bottom of this list, other French groups also have a D grade, the lowest, such as La Française des Jeux, Publicis and Servier, with the others scattered in the middle of the ranking.

Denise Auclair, head of the business travel campaign at T&E, notes that, ” while some companies in France are showing that reducing

While French companies do not appear at the top of this ranking, whether they are reassured or not, they are not alone. Volkswagen and Accenture are also singled out, while Google, Facebook and Microsoft are in the lowest category of the ranking, with T&E inviting them to “accelerate their transition to becoming smart travelers“. For that, too, is the goal of T&E’s analysis and its Travel Smart campaign, which was launched to ask companies to ” publicly commit to an absolute target of at least a 50% reduction in flights from 2019 levels by 2025 or sooner. According to Transport & Environment, reducing business travel by 50% by 2030 in Europe would be equivalent to 32.6 Mt less CO2 emissions, the equivalent of taking 16 million polluting cars off the road.

While before the pandemic, business travel accounted for about 15-20% of air travel according to a McKinsey study, or about 154 million MtCO2, T&E urges companies to continue on the path of moderation, no longer coerced and forced by travel restrictions, but thoughtfully and voluntarily. The pandemic has proven that companies can be just as efficient, if not more efficient, by flying less and reducing their emissions at the same time,” said Denise Auclair. Smart travel is about making every meeting count. While not all business air travel can be avoided, virtual meetings are an effective substitute in many cases. We’ve been doing it for two years, so why stop now?”