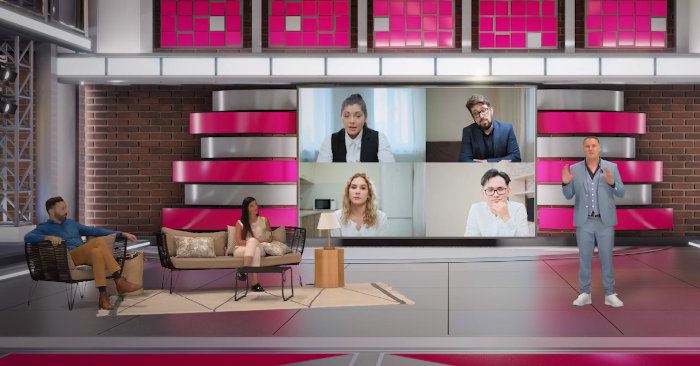 Offered by Chateauform and Stardust Group, the new Studio Oxygene-Technology XR combines the real with the virtual.

Speakers immersed in a 3D universe, graphics appearing as if by magic, backgrounds that move or change color at will, all highlighted by 100% virtual lighting: the new Oxygen-Technology XR Studio, unveiled by Chateauform’, takes corporate events to the next level by combining the real with the virtual.

Since the beginning of the digitalization of meetings, with the help of Covid, Chateauform’ has been among the first to offer companies solutions

such as Studio 28 at the George V for small TV sets, the Seine at the Metropolitan for hybrid meetings that are half face-to-face and half virtual, and the Haussmann set at the Docks de Paris for spectacular filming. This is enough to cover all the requests. But the European leader in the organisation of seminars and events is now going one step further by offering the Palais des Congrès de Paris Saclay, in Massy, an avant-garde technology used in particular by the cinema and video clips.

XR technology is just under two years old,” says Eric Matouk, Stardust Group’s development director. We see it in the United States for innovative TV shows or during the last Eurovision contest and the Euro 2021 football tournament”

. The Stardust Group, already a partner of Châteauform’ for Studio 28 and the Metropolitan’s “Seine”, took a year to adapt this technology to corporate events.

In fact, the originality of the Studio Oxygène -Technologie XR, of 70 m2, is based on a green background from the floor to the ceiling, including the walls, all of which allows the creation of virtual worlds in 3D. You can immerse people as well as objects, for example tables or cars,” describes Eric Matouk. The set is tracked by three 4K cameras controlled from the control room. Zoom in, zoom out, dolly: when they move, the set follows the movement at the same time. To add to the illusion, the shadows on the ground of people and objects are clearly visible. ” The brain has no doubt, it’s not fake, everything looks real,”

This high-tech studio can be used for post-production, with video effects added to the footage afterwards. But, above all, this set can be used for live events, streamed on one or other of the platforms. “That’s what we’ve focused on with this product

,” says Eric Matouk. To interact with participants from a distance, a 25 m2 LED wall completes the set.

During the event, the speaker can dynamize the scenography by changing the universe as much as he wants, and this is a great way to make the event more dynamic.

The field of possibilities opened by this technology extends to conventions and results presentations, to trophy presentations as the Stardust Group has already been able to organize for Saint Gobain, but also to virtual showrooms or car launches. It can also be used to show buildings that do not yet exist, or that are only at the 3D stage, or to move around in inaccessible places, for example to present the take-off of a space rocket at the foot of the aircraft. These are just some of the projects that the digital event solutions specialist has in the pipeline. ” The possibilities are endless. We can go very far in faking and virtualization,” concludes Eric Matouk.

Budget: how to manage your money abroad?