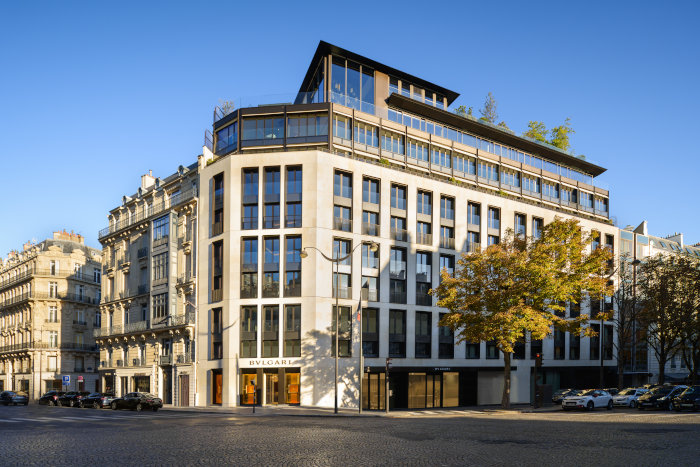 It is now official, the long-announced Bulgari Hotel Paris will open its doors on December 2nd. Located at 30 avenue George V, almost opposite the Four Seasons and very close to the Prince of Wales, the hotel intends to impose itself as a new competitor on the Parisian palace scene with its elegant, but above all contemporary atmosphere.

The result of the metamorphosis of a building dating from the 1970s, this new hotel in the Golden Triangle offers a setting designed by the Italian architectural firm Antonio Citterio Patricia Viel, in line with the spirit of the Italian jewellery brand. The Bulgari Hotel Paris has 76 rooms, most of them suites with terraces, all designed as private apartments, furnished with care and enhanced with works of art and portraits of celebrities close to the House of Bulgari. On the rooftop, the most emblematic of these rooms is a two-storey penthouse, combining 400 square metres of interior space with 600 square metres of exterior space with a garden and panoramic view of the capital.

In terms of relaxation and catering, the hotel’s offer obviously stands out with its Italian restaurant, Il Ristorante, led by the three-starred chef Niko Romito. As for the spa, its offer extends over 1300 m2 and two levels and includes a 25-metre swimming pool, one of the largest among Parisian luxury hotels. There is also a fitness area equipped with the latest technology.

” We are particularly proud to add a French jewel to the Bulgari Hotels & Resorts collection with the opening of the Bulgari Hotel Paris“, Jean Christophe Babin, CEO of Bulgari. The hotel version of the jewellery brand, developed in partnership with Marriott, was already present in Dubai, London, Milan, Beijing

and Shanghai, as well as in Bali. Other projects should soon come to fruition, notably in Rome and Moscow in 2022, but also in Tokyo in 2023 and in Miami the following year.

As for Los Angeles, we will have to wait until 2025 to discover a Bulgari hotel nestled in the hills of Santa Monica. VIP travelers will find elements in common with the Parisian establishment, including interior spaces designed by the brand’s resident designers, Antonio Citterio and Patricia Viel, and a table overseen by chef Niko Romito, as well as a vast spa. The architecture of the building, entrusted to the South African firm SAOTA, will make room for 58 rooms – mostly bungalows – as well as 8 private residences ranging from 1,100 to 4,460 sq. m., all of which will be landscaped by the Swiss firm ENEA, which is already at work on the Bulgari Beijing. You don’t change a winning team.

Hilton: a luxurious Conrad in Los Angeles, a first Tapestry in Brazil

The Air France Roissy lounge gets a makeover