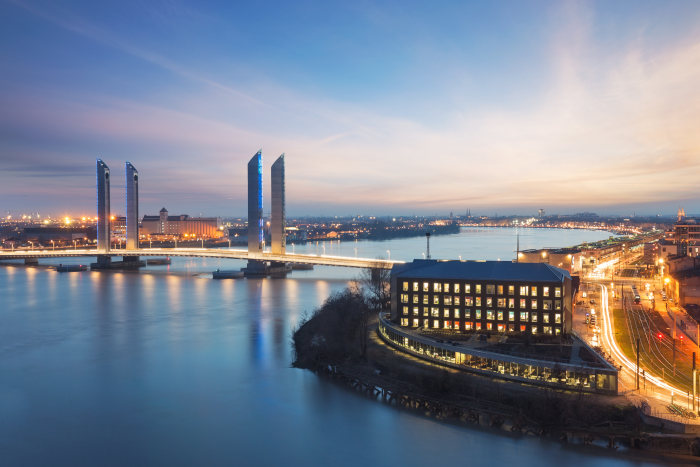 In Bordeaux, the Bassins à Flot district is home to many players in the digital economy.

Study after study, poll after poll, Bordeaux reaffirms its privileged place in the minds of business leaders and their employees. According to Arthur Loyd’s 2021 Barometer on the attractiveness of French cities, Bordeaux has climbed to the second step of the podium for the first time in the category of Very Large Cities, ahead of Toulouse and approaching Lyon. Similarly, in the ninth edition of its study “The preferred cities of Parisian executives” published at the end of last summer, Cadremploi placed Bordeaux in first place ahead of Nantes, Lyon, Aix-Marseille and Montpellier.

The arrival of the TGV line in 2017 is obviously not unrelated to this, putting Paris at just over two hours from the Bordeaux Saint Jean station, and with it a host of executives potentially heading for a better quality of life. A desire furthermore reinforced by the health crisis and the trivialization of telecommuting. “It remains to be seen whether this trend will continue in the longterm. One thing is certain, the attraction of executives for Bordeaux, Nantes and Lyon is no longer in question: these cities are dynamic employment areas while offering a pleasant living environment, so sought after by Parisians

Bordeaux did not wait for the Covid crisis, nor even the completion of the LGV, to imagine its economic future. Since the mid-2010s, it has been rethinking, rehabilitating, and innovating in line with the progress of the projects launched under Alain Juppé’s last mandate. It is also spreading out: the city, which for a long time had the Meriadeck district as its center of gravity, is opening up its business horizons in all directions, to the south and the Euratlantique district

, to the north and the Bassins à Flot, not to mention the Ginko eco-neighborhood on the banks of the lake or the Bastide Neel and the Brazza district on the other side of the Garonne River.

Presented as one of the largest development projects in France, the Euratlantique district is now 75% complete and extends the city’s borders from the Saint-Jean train station to Floirac and Bègles. With a 20-year target of 25,000 inhabitants, as many new jobs and 300,000 square meters of offices, housing and facilities, the district is favored by companies in the banking and insurance sector, including Allianz, AG2R and the Caisse d’Epargne, while the Caisse des dépôts et consignations is expected to move in soon

The proximity of the TGV station favors the establishment of regional headquarters of national or multinational companies. But the Euratlantique district is not just for big business, with another focal point being MECA, the House of Creative Economy and Culture in Aquitaine, or the Newton Park in Bègles, home to wind energy pioneer Valorem and other green growth players. All of this on a site that was once home to Esso. Like a symbol. 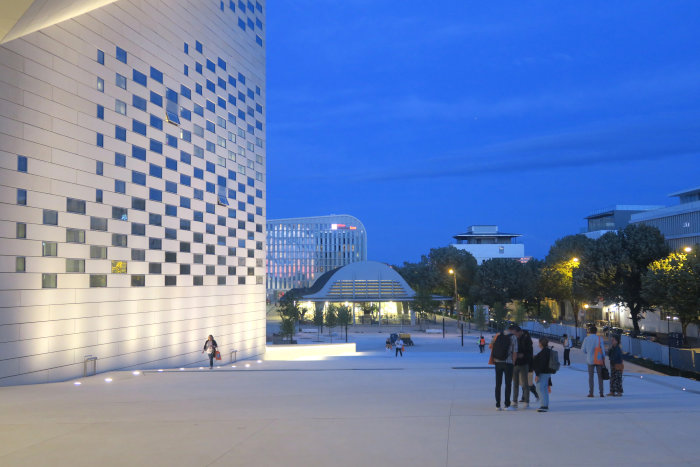 The MECA, the House of creative economy and culture in Aquitaine. Loïc Graniczny

Because the district responds to current trends, mixing housing and offices, shops and restaurants, hotels and, of course, green spaces. In this context, a former expressway, the boulevard des Frères Moga, which served as the southern entrance to the Bordeaux metropolis, has begun its transformation into a tree-lined avenue offering a large space for pedestrians and bicycles. An “express” bicycle lane will soon link the Euratlantique district to the center of Bordeaux as far as the Chaban-Delmas bridge and the Bassins à Flot.

The digital ecosystem in the Bassins à Flot district

With its 5,400 housing units and 90,000 square meters of office space, the Bassins à Flot district is home to the new wave of tech in Bordeaux. This is where the Betclic sports betting site chose to set up its headquarters by relocating its teams from Paris and London. It’s also where Ubisoft opened its studio in 2017 and where Cdiscount set up its 600 employees, almost at the foot of the emblematic Cité du Vin. Among other players who, like IDMOG, Niji, OVH or a coworking space Mama Works, have all made the choice to settle in this booming district. The city, which has been awarded the French Tech label, is banking on innovation and is strengthening this ecosystem by hosting incubators for future talent in the district, notably the Digital Campus, dedicated to the digital sector, and the LISAA Bordeaux school, which focuses on design, graphics and video games.

However, the borders are not compartmentalized. For example, it is in the Bassins à flot that the Crédit Agricole Aquitaine regional bank set up its headquarters in 2018. For its part, the Euratlantique district also hosts the Cité Numérique, in the Terres Neuves district of Bègles, on a former postal sorting site. This innovative ecosystem, which has been awarded the French Tech label, covers 25,000 square meters and over 8,500 square meters of outdoor space. As for Ubisoft, in order to accommodate more talent, its Bordeaux headquarters will cross the Garonne at the end of 2023 to move into the Bastide-Niel eco-neighborhood, the result of the redevelopment of former railroad wastelands and the old Niel barracks. Bordeaux is not done reinventing itself.

Eurowings: a presence now concentrated in the French regions