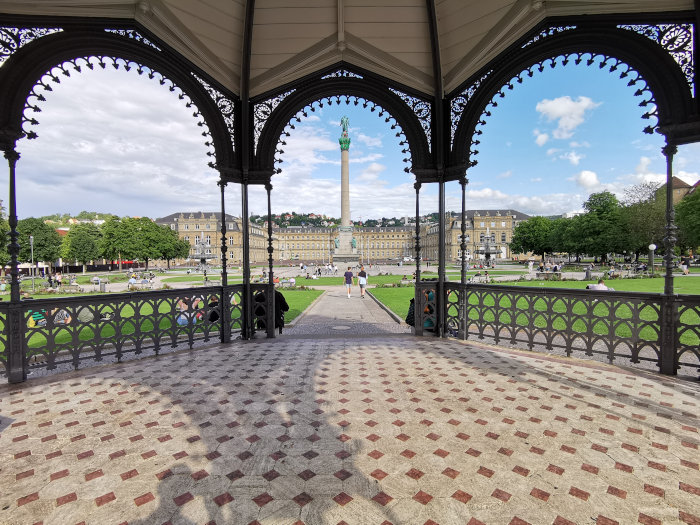 Schlossplatz – the castle square – in the heart of Stuttgart, the capital of Baden-Württemberg.

“Pandemic, what pandemic?” one might be tempted to say as one strolls through the streets of Stuttgart. The southwestern German metropolis seems to be completely unaware of the crisis. The terraces of cafés and restaurants are full of people at the end of summer, the cultural life is in full swing, while Mercedes and other luxury cars line the pavements of this city of over 600,000 inhabitants.

Everything here exudes opulence, but an opulence that one hopes is in good taste. ” Stuttgart is one of the richest cities in Germany, with an opulence that is intended to be discreet and solid. We don’t flaunt our wealth here. This is a strength for the city and an attraction for business travellers,” explains Armin Dellnitz, Managing Director of the tourism promotion agency Stuttgart Marketing GmbH. Armin Dellnitz is a native of northern Germany and has been a director of the tourist office for over 12 years. ” Stuttgart’s appeal lies in its pragmatism and openness to all trends and cultures

This impression can also be found in the other major cities of the state. In Karlsruhe, Mannheim, Freiburg and Heidelberg, daily life has returned to near normal after months of confinement due to the covid. 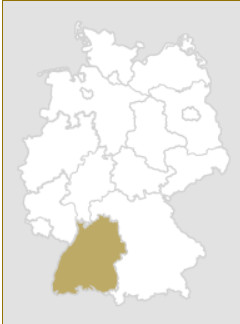 With its 11 million inhabitants – as many as Belgium – a GDP per capita of 47,290 euros, a purchasing power almost 40% higher than the European Union average and an unemployment rate that only affects 2.4% of the population, Baden-Württemberg is in fact an economic juggernaut in Germany. It alone generates 15.3% of the Federal Republic’s GDP. The secret of this economic success is that politics and business work well together. The big names in German industry – Bosch, Daimler Benz, Kärcher, Porsche – are based in Stuttgart. But they are not the only ones: ABB, Hewlett-Packard, Michelin, Roche and Samsung have also chosen Baden-Württemberg as their German base. Karlsruhe is home to the local headquarters of L’Oréal, for example.

The region’s dynamism is also reflected in the density of the SME network. Many of them are grouped together in specific “clusters”. There are 110 such clusters throughout the state, which promote contacts between SMEs, research centres and services. The economic and political actors of the Land are therefore showing pragmatism in the face of a brilliant economic situation, hardly marred by the Covid epidemic. If the elections of last March have brought a notable political change, it is because of this change.

e, with a most heterogeneous coalition between conservatives of the CDU and ecologists, the revolution did not take place.
” In France, such a combination would be a bit like water and fire. Here, there is perhaps more of a sense of what is good for the region than elsewhere. The new coalition has signed a governance programme. And it is applied to the letter, as would be a contract. And this is always in the name of this pragmatic approach

,” describes Catherine Veber, Consul General of France in Stuttgart. Because, regardless of their political leanings, the parties in power are well aware of the region’s strengths.

In fact, Baden-Württemberg is considered Europe’s leading region for innovation. Together with Bavaria, the two federal states account for almost 50 percent of all research and development expenditure in Germany – 27 percent in Baden-Württemberg alone. The state spends almost 6% of its GDP on research, almost twice the German average and far ahead of China, Japan and the USA. Freiburg, Heidelberg, Heilbronn and Karlsruhe are major research centres, particularly in sustainable mobility and the environment, health and information and communication technologies.

Karlsruhe, for example, is home to the Karlsruhe Institute of Technology (KIT), one of Germany’s leading institutions with more than 9,000 researchers and 25,000 students. This institution has enabled the city to establish itself as the German capital of information technology and the Internet.

The region is therefore ideal for French business travellers because of its proximity and its sense of innovation. There is a very active cooperation for the Upper Rhine involving Alsace, Baden-Württemberg and Rhineland-Palatinate in Germany, as well as the Basel region in Switzerland. The fight against global warming, joint rail infrastructures, cross-border business parks and university and scientific cooperation are just some of the subjects dealt with by this supra-regional entity. And it helps to position Baden-Württemberg as the key partner for French companies in Germany 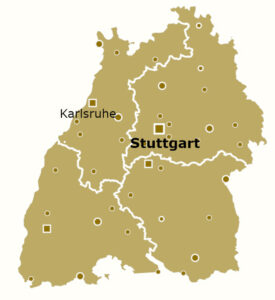 Optimism back at Brussels Airlines this winter