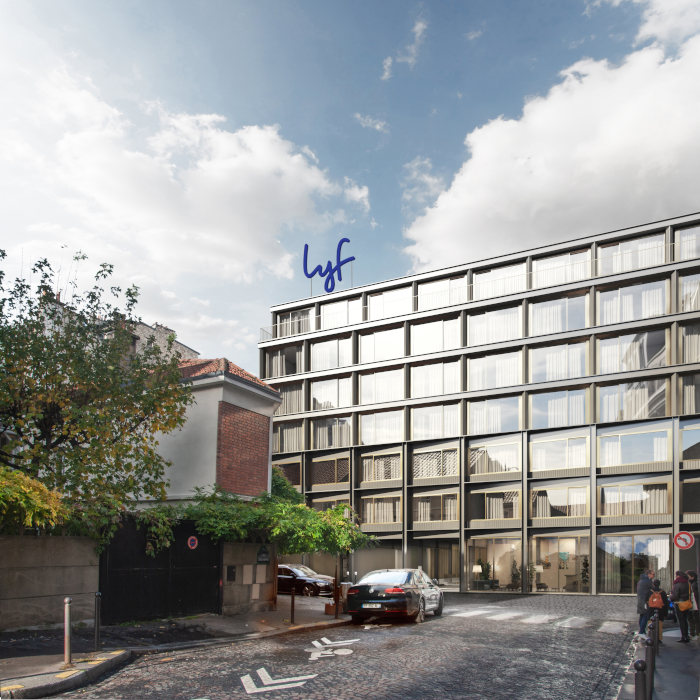 The future lyf Gambetta Paris residence, the result of the conversion of a former printing works.

The best of the hotel, the aparthotel and the coliving apartment, no more and no less. This is how Ascott describes the lyf brand, which will make its debut in Paris in 2024 in a district that reflects its image, both lively and dynamic, the 20th arrondissement. The future lyf Gambetta Paris residence, located five minutes’ walk from the Gambetta station, will offer a hybrid accommodation solution with 139 units mixing classic double and twin rooms as well as studios with fully equipped kitchens and twin rooms around a living room with a private bathroom and shared kitchen. ” This offer is suitable, for example, for consultants on assignment who need to work together in the evening in a comfortable space, in complete confidentiality

“, describes Philippe Mettey, vice-president of sales and marketing Europe for The Ascott Limited.

The Singaporean group specialising in long-stay accommodation will therefore introduce this new brand, which initially appeared in Asia and now has five residences in Singapore, Bangkok, Fukuoka and Hangzhou, to Europe. ” With Lyf, we are not specifically targeting millennials, but travellers who have this mindset, for example start-ups or company directors looking for a community atmosphere

,” explains Philippe Mettey. To reinforce this idea, lyf guards will be responsible for the general atmosphere by organizing conferences or yoga classes, for example, among other events open to local life.

Aimed at the new generation of travellers, the lyf Gambetta Paris residence will devote a lot of space to shared living spaces with a bar and a Bond social kitchen where residents can prepare their meals and exchange recipes or take cooking classes. For business travellers, in addition to the practical presence of a Wash & Hang laundromat, the residence will have a coworking space and meeting rooms, all overlooking an open-roofed green patio, one of the signatures of the building – a former printing works in the process of being converted – redesigned by the architects Hardel & Le Bihan.

However, although it is focused on coliving, it is not a coloc’ atmosphere that clients will find in this residence with a four-star positioning. Its design has been entrusted to Fabien Roque, an interior architect known for his top-of-the-range creations, notably the Maison Albar Le Vendôme hotel and the Voco Montparnasse in Paris and the Burdigala in Bordeaux. An architect who will integrate the building’s original purpose into his project while preserving its industrial spirit. “To do this, we intend to reuse old signs and

We also want to keep an old printing press, which has a real history,” explains Fabien Roque. We also want to keep an old press from the print shop that has a real history. ” As the old blends with the new, guests will also be able to use the Discover ASR mobile app to access the hotel’s services, such as opening their apartment, checking in and out, making contactless payments, interacting with other residents or with the “lyf guards.”

After this first in France and Europe, which is the result of a partnership with the Coffim group, Ascott intends to extend the offer of its lyf brand in the major European cities. ” Other projects are being studied in Europe,” says Ngor Houai Lee, Managing Director of Ascott Europe. In the meantime, 17 lyf residences are expected to open by 2025 in Bangkok, Cebu, Danang, Kuala Lumpur, Manila, Melbourne, Beijing, Shanghai, Singapore and Xi’an in addition to Paris. It should be noted that this subsidiary of CapitaLand Investment currently has around 15 Citadines aparthotels and three luxury La Clef residences in the French capital, while its European portfolio extends to 48 residences in more than 20 cities, plus six establishments currently under development.

Annemasse: the Wojo coworking centre relies on the Léman Express