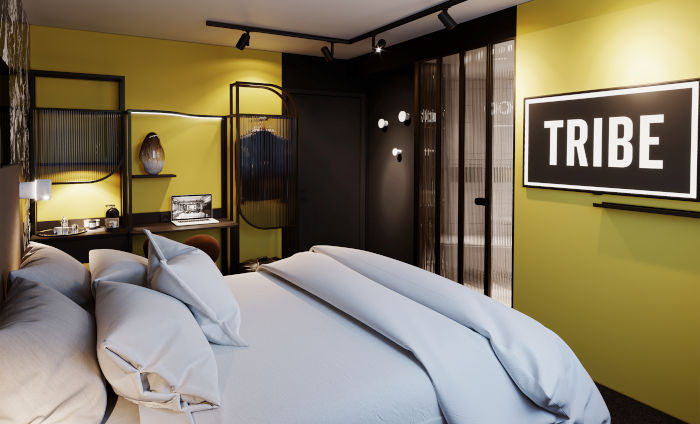 Lifestyle hotels seem to be finding an increasingly natural place in the La Défense business district. CitizenM had been a forerunner with its establishment back in 2017 near the Grande Arche and La Défense Arena and will soon be joined, in mid-June, by an Okko hotel. At the other end of the district, towards the esplanade, it is a Mama Shelter

that set up last March with a 211-room hotel topped by a rooftop. In Accor’s galaxy of lifestyle brands, developed as part of the Ennismore joint venture, Mama Shelter will now have its counterpart on the other side of the Neuilly Bridge, with a Tribe hotel in Courbevoie, starting May 24.

One of the French group’s latest additions, this new contemporary brand is starting to take off, having appeared for the first time in France at the end of 2020 in Paris, in the Batignolles district. Before further developments are expected in Saint-Ouen and Clichy in the Paris region, but also in Le Touquet

, the future of Tribe will involve a location next to the towers and headquarters of numerous companies.

” The arrival of lifestyle hotels in Europe’s largest business district, where they are not necessarily expected, is interesting because it meets the new expectations of corporate clients,” says Romain Folliot, director of Tribe Paris La Défense. In the same way, this trendy accommodation is just as attractive to individual leisure customers, who want to extend their stay beyond the week, during weekends and vacations. With, to attract travelers, ” more affordable prices than in the heart of Paris while being easy to access by metro, as well as by car – which is not easy in La Défense – with access by the platforms and a large parking lot

,” says the director of this new hotel.

See also  ANA: Paris-Tokyo flight a collateral victim of the war in Ukraine

With its elaborate design by Thierry d’Istria, the Tribe Paris La Défense offers an idea of affordable luxury by revisiting two office buildings belonging to the Orange group as a high-end hotel with 184 rooms and suites. Rooms all with work spaces with comfortable seating and equipped with Chromecast and Nespresso machines, steamers to straighten clothes and hospitality products designed by Kevin Murphy, a renowned Australian hairdresser. </p

This nod to the fact that the Tribe brand was born on Australian soil, in Perth in 2019

, is one of the restaurant’s common threads. The restaurant’s menu is inspired by these distant origins with, for example, a meat pie revisited as a pie, a slice of beet – a very popular vegetable “down under” – instead of a slice of tomato in the burgers or bacon & eggs for breakfast. Not to mention Australian wines and beers, of course. Travelers should also note that there is also a take-out service available 24/7. 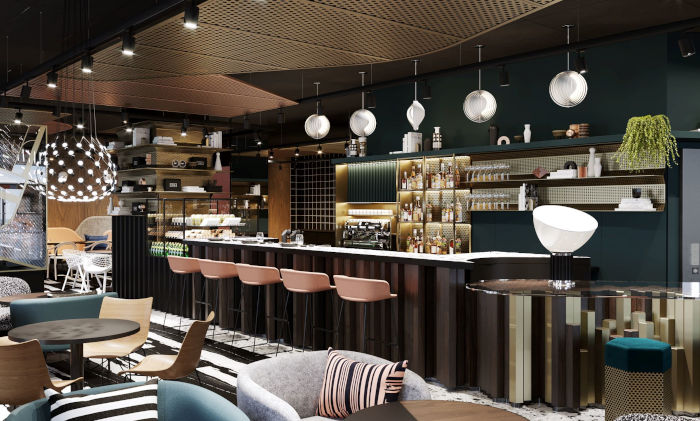 Following the canons of the lifestyle hotel industry, Tribe La Défense is not reserved for its residents and is above all a place of life open to its neighborhood and the employees of neighboring companies. ” They can come at any time to work and exchange ideas, have a drink and have fun

,” explains Romain Folliot. explains Romain Folliot. The central point of the establishment, the “social hub” offers a variety of spaces and seating for all these occasions, from a table d’hôtes where several people can sit to more intimate corners. A lively lobby that becomes a coffee shop and coworking space in the morning and afternoon, then a cocktail bar at afterwork time until the evening.

On the second floor, Romain Folliot describes the ” nugget

” of his establishment, the Byron Bar. Here too, the name refers to Australia and its surfers’ paradise, Byron Bay. The strong point of this bar is not only its cocktail menu, some of which are signed by the mixologist Matthias Giroud in the current trend of “low alcohol”. It is extended by a green terrace and a Japanese garden, allowing you to enjoy the beautiful days.

For atypical meetings and events

Aimed at residents or visitors, this space can be used by companies ” for business breakfasts or privatized for afterwork or events

Despite its business environment, the Tribe La Défense does not offer meeting rooms as such. However, the hotel manager does not “refrain from being inventive

” when faced with possible requests and mentions the possibility of using a suite of the hotel with a terrace to rent it on occasion as an atypical meeting place.

After this incursion into the heart of Parisian business life, the Tribe brand is getting ready to discover another hot spot for business travel this summer, the Canary Wharf district. ” Our long-distance counterpart

Inauguration : Keeze coworking takes the key to the Champs

Andorra, the mountain destination for everyone