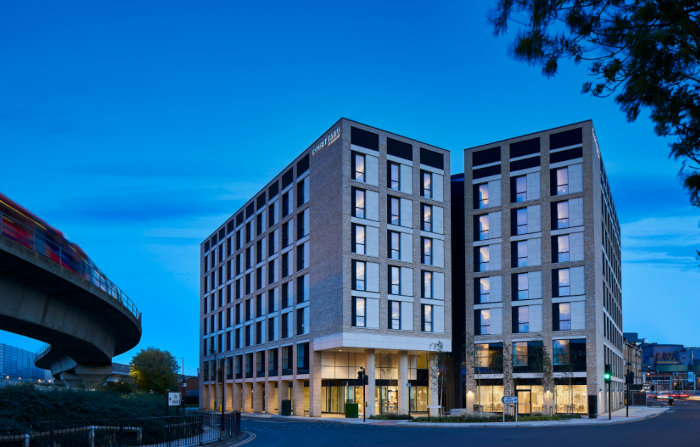 A Courtyard by Marriott has just opened near London City Airport.

As air traffic gradually picks up, the airport hotel industry is adding new properties around the world. Recently, IHG announced the ongoing preparation

of several Holiday Inn Express properties near the Madrid Barajas and Seville hubs in Spain, Rome Fiumicino in Italy and Ankara in Turkey, all expected by 2022-2023. In Germany, the budget brand has also just demonstrated the adaptation of its low-cost offer near major transport hubs, as it has just set up its largest hotel in Europe, with 455 rooms, near Dusseldorf station.

Back to airport hotels, in London, a Courtyard by Marriott opened on November 8, just a five-minute walk from London City Airport. Closer to the business hub of the British capital, the hotel meets several expectations of travelers, starting with 184 rooms at affordable prices. But because of its proximity, the Courtyard by Marriott is also an alternative to the airport’s lounge and restaurant offerings with its Starbucks coffee shop, Grab and Go market and all-day Kitchen & Bar concept. Naturally focused on business travel, the Courtyard by Marriott also offers three interactive meeting rooms and a fully-equipped business centre

” Historically, business travellers using London City Airport had the choice of two high-traffic off-site lounges and a limited range of dining options in the terminal itself,” described Chris Thomas, the hotel’s general manager. The latter also points out that, with the airport’s redevelopment program on hold until at least 2023, his property offers another departure lounge option ” for travelers who want to take advantage of the airport’s fast check-in process.

See also  Finnair to fly to Busan, Dallas and Tokyo-Haneda in 2022

Another European hub to see a brand new hotel recently is Frankfurt. This is not a new hotel per se, but the completion of a major transformation project of the Sheraton Frankfurt Airport Hotel & Conference Center. The hotel, which has been in operation since 1975, underwent a three-year renovation phase before the pandemic. Perfectly situated for business travellers between Terminal 1 and the long-distance train station, the three-building complex has been redesigned to house two of the world’s leading business travel brands under one roof. As part of this, one of the wings will house a 233-room Marriott hotel from 2020.

with its own entrance. 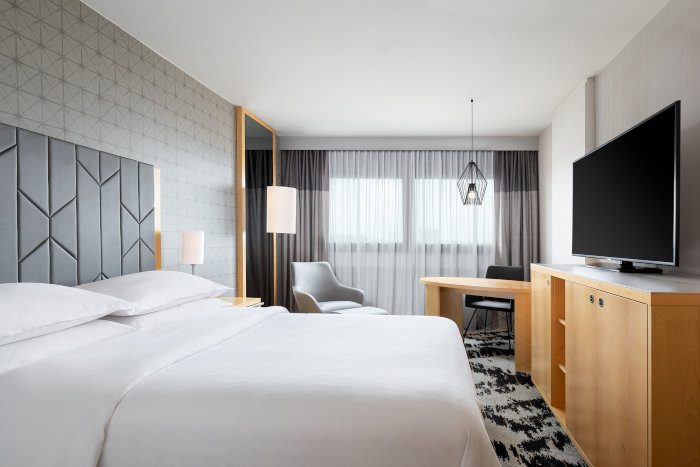 In addition to a new design for the 779 rooms – 236 of which are premium rooms with a view of the runways – the conference center and some of its areas have yet to be modernized. The Sheraton now features new suites – three Sheraton Club and seven Junior suites – and a new Sheraton Club Lounge on the lobby level. As for the huge conference center of more than 4,000 m2, with nearly 60 meeting rooms and able to accommodate events for up to 1,200 participants, its spaces have been updated.

Contemporary and long-stay in Los Angeles

: bringing together two brands in the same project is one of the hotel trends of the moment. Hyatt has also just demonstrated this near Los Angeles airport with an ambitious complex with both a business and leisure dimension.

For the occasion, the American group has combined one of its lifestyle brands, Hyatt Place, with a brand more geared to long stays, Hyatt House. With a view of the airport runways, the complex, which opened in November, is part of the ongoing transformation of the Californian hub. A large-scale project, costing $14 billion, which will see, among other things, the operation in 2023 of an automatic train that will link the airport terminals, the metro and will also drop passengers off at the foot of the Hyatt hotels 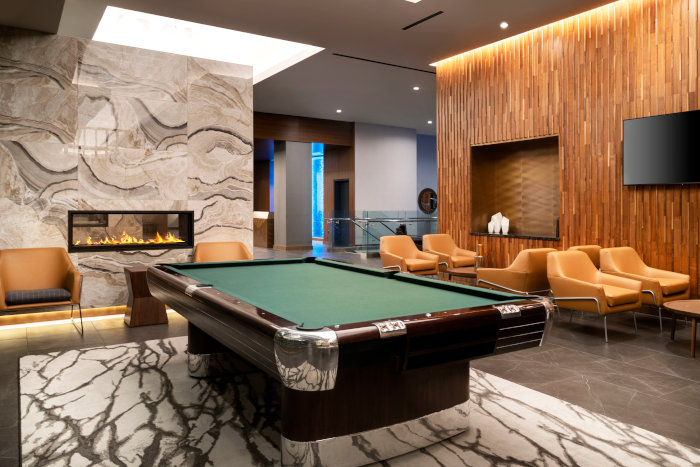 In this rapidly changing airport district, the two hotels are housed in a 1967 building designed by architect Welton Becket, the same architect who gave the airport its iconic Theme Building. The design, by carrier Johnson + Culture, reflects the aesthetic of the 1960s.

While the Hyatt Place LAX / Century Blvd has 272 rooms, the Hyatt House offers 129 suites with fully equipped kitchens and separate living rooms. They share nearly 1,000 square feet of indoor and outdoor event space with two meeting rooms. The hotels also boast the highest rooftop in the airport area, with the only outdoor pool in the area. In addition, there are two innovative restaurant concepts, Greenleaf Kitchen & Cocktails, which combines “healthy” and gastronomy, and on the roof terrace

and the ShoresLAX California cuisine restaurant, both of which can be privatized.