The opening page of the website of Capital A, the new name of the AirAsia Group On

January 28 in Kuala Lumpur, the AirAsia

Group presented its new identity: Capital A. A change of name that reflects a new business strategy for the carrier. Capital A brings together a wide range of activities in the field of travel and lifestyle. This is quite unique in the airline world.

This is what Tony Fernandes, the CEO of AirAsia and now Capital A, emphasizes. “This is an important step that marks a new era for the group. This announcement reinforces the fact that we are no longer just an airline. It has always been my intention, long before the pandemic arrived, to leverage the data we have accumulated over 20 years. And to integrate new, cutting-edge technologies to offer a wide range of products and services, beyond just selling airline tickets.

Diversification at the heart of Capital A’s strategy

Covid’s pandemic will have paradoxically played a key role in this decision. The almost total cessation of the airline business has accelerated the diversification of the business. Capital A aims to be a one-stop digital travel and lifestyle services group. With its sights set on the formidable market represented by the Association of Southeast Asian Nations,ASEAN. ” With access to more than 700 million people in the region, I foresee incredible growth opportunities for our brand across many sectors in all of our core markets

one of the top three online travel agencies in ASEAN

Because beyond selling airline tickets, the former AirAsia Group has become a jack-of-all-trades in the service sector. ” We offer 16 products and services on our AirAsia Super App. We not only offer the best flight and travel deals. But we also cover everyday lifestyle needs, from food to retail and e-commerce, 24-hour delivery, car rental and much more. This makes us one of the top three online travel agencies in ASEAN. Our Super App is poised to become the region’s leading lifestyle app soon,

” says Tony Fernandes. According to the CEO, AirAsia’s Super App is used by 50 million people per month…

. Currently available in Malaysia and Singapore, it is now waiting for the green light from the authorities.

s in Indonesia and Thailand.

As for the airlines, Tony Fernandes acknowledges that the situation remains complex due to Asia’s reluctance to reopen to the world

” While Capital A is the new name of the group’s holding company, one thing that is not changing is the AirAsia brand name for our airlines. It is one of the strongest brands in Asia. It provides a strong platform for all our other products and services to build on

” The last two years have been the most challenging and disruptive in the history of commercial aviation, but I welcome the coming year with more confidence . Domestic air travel has already begun to rebound in our major markets. And I expect borders to gradually reopen throughout 2022 and our international services to return to normal capacity by the middle or third quarter of this year

in the last year before the Covid crisis, the group had recorded a record 51.56 million passengers 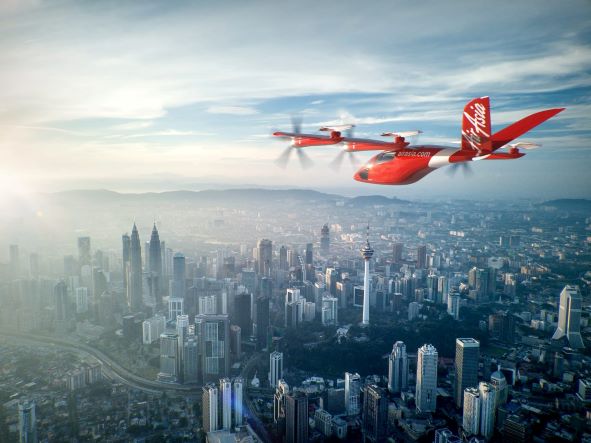 An image of a future VX4 flying cab in AirAsia colors in the sky over Kuala Lumpur (Photo: AirAsia)

The situation does not hinder Capital A’s ambitions. By 2026, the group has set as its objectives:

The company also hopes to make Santan, its in-flight catering service, a restaurant franchise throughout ASEAN. A first restaurant already exists in the heart of Kuala Lumpur, and ready-to-use meals are already available.

In the latest development, the company has signed a non-binding memorandum of understanding to lease a minimum of 100 VX4 aircraft to international aircraft leasing company Avolon. The VX4 is an ultra-light take-off aircraft.

rticale (eVTOL), which would be used as a flying cab. It would be virtually silent in flight, produce no emissions and have a low cost per passenger mile. The VX4 would be part of the new urban mobility with a range of 150 km and a cruising speed of 320 km/h.