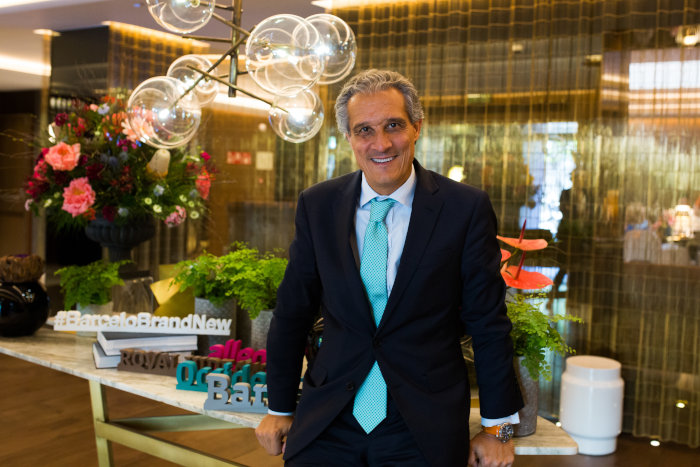 With a large number of hotels on both sides of the Atlantic, how is the activity of the hotels of the Barcelo group evolving?

Raul Gonzalez – The situation is very different according to the regions. If we take the Mexico and Caribbean zone, our hotels are doing very well. The figures are the same as for 2019 and, for some, we are even recording more reservations for the first part of next year than before the pandemic. With long-haul travel limited, this market has fully recovered with record months for our leisure hotels thanks to the US market, domestic tourism, but also Canadians starting to return.

We can assume that in Spain, and more generally in Europe, the situation is less flourishing?

R. G. – People started travelling again eight months ago, but over short distances. Today, the distance is tending to increase. If you look at the results of airports focused on international travel such as Paris CDG or Heathrow, their activity is low, whereas local airports are in a much better situation. As a result, the first establishments to recover were the budget hotels, then the leisure hotels, then those in the tertiary and secondary metropolises. Conversely, a destination like Barcelona, which is dependent on international tourists from Asia and the Americas, is in the most difficult situation in the Spanish market 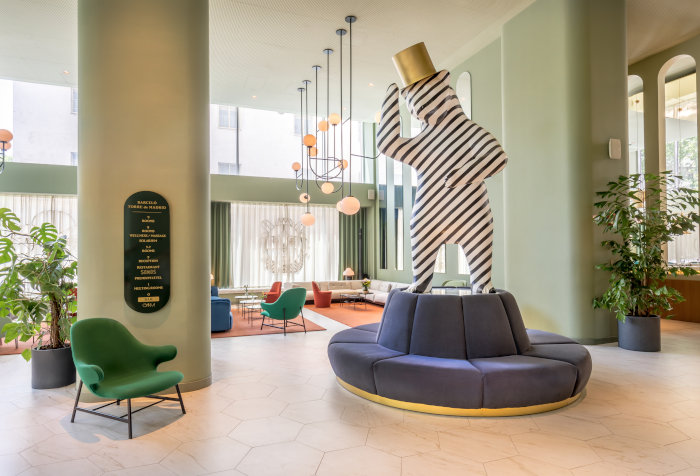 The Barcelo Torre Madrid, opened in 2018, designed by Jaime Hayon.

What about business travel specifically?

R. G. – Within our group, we have two divisions, one dedicated to hotels and the other to everything that is travel agencies, tour operating, etc. . It is interesting to note that today, it is the corporate part of our travel agency (editor’s note: Barcelo manages the Spanish subsidiary of BCD Travel) which records better performances than the leisure part. This is totally the opposite of our hotel division where, in Europe, the Middle East and the Americas, it is the leisure hotels that show the best results. Here’s my explanation: since the clientele of our leisure hotels is essentially domestic, tourists don’t need to go to a travel agency to book an establishment near their home, they do it mainly on the Internet. As a result, for our agency activity, the corporate segment is the most active today.

Are meetings and incentives also in a recovery phase?

R. G. – Even though we are seeing a gradual return of this clientele – we recently had a

The MICE segment will be the last to pick up, as we have 1,500 people in one of our hotels in Seville. Faced with the spread of the virus, corporate top management is still wary of bringing their teams together. But the incentive will come back, I am sure. Employees need personal relationships, companies need to stimulate their teams and motivate them. We need to give the sector time to stabilise the health situation.

In the short term, in 2022 and 2023, we will still see a drop in the corporate market, but that it will exceed the results of 2019 within two to three years.

In your opinion, will business travel fully recover after the pandemic?

R. G. – For some, it will come back at 100%. Others, who are more negative, expect that it will never return to the levels we have seen. For my part, I think that in the short term, in 2022 and 2023, we will still see a decline in the corporate market, but that it will exceed the results of 2019 within two to three years. I remain optimistic. But at the same time, with the rise of teleworking, many companies are limiting the number of people coming into the office, or even reducing the size of their offices. As a result, they will need to hold more meetings, more team buildings to keep their employees engaged. If employees work behind their screens all day, in two or three years’ time they will not know where and for whom they are working. Another factor is that business trips will last longer, with a more bleisure dimension. As a result, the length of stay will increase. Today, for an urban hotel, it is 1.4 to 1.6 nights. It could rise to 2 or even 2.2 nights.

In light of the various trends that have been reinforced by the pandemic, have you adapted your hotels’ offer?

R. G. – During the pandemic, we took initiatives to adapt to the situation, for example by converting rooms into offices. To be honest, we sold very few. We are also thinking about long-stay accommodation solutions with real estate partners, but here too we don’t feel a strong demand. On the other hand, what is clear is that with the pandemic, we have improved considerably from a technological point of view and we are now ready to welcome more and more hybrid meetings in our hotels. This trend is going to take hold over the long term, with organisers demanding a high quality offer to be able to seamlessly link their teams spread over twenty different locations.

Let’s talk about your group, whose activity is not limited to the hotel business. What are the different facets of your business?

R. G. – The Barcelo group is celebrating its 90th anniversary this year, with, as I said, two business units

We have two divisions, one in the hotel business and a travel division, Avoris, which was born of the merger last year with the second largest travel agency in Spain, Globalia. Today we have more than 1,500 travel agencies in Spain and Portugal, all of which, as I said, also include a corporate travel agency in partnership with BCD Travel. And we are also present in tour operating and air travel with the company Iberojet. In a normal year, our group turnover amounts to 5 billion euros, which makes us the leader in this market in Spain 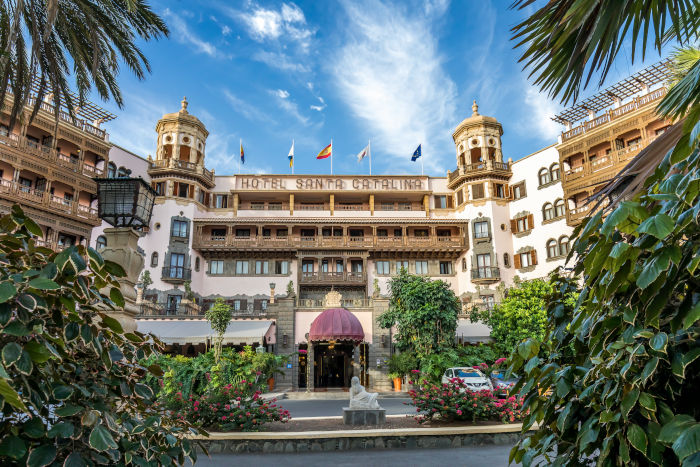 The Royal Hideaway Santa Catalina, on the island of Gran Canaria.

As for your hotel division, can you describe to us the whole of your offer?

R. G. – As far as hotels are concerned, we have three models. Even though none of them are Barcelo branded, the majority of our hotels, about 115 out of the 250 that we have in the world, are in the United States. Twenty years ago we acquired a publicly traded management company, Crestline, which was a spin off from the Marriott Group. All these hotels are managed on behalf of the Hilton, Hyatt or Marriott groups. At the same time, in Central America and the Caribbean, another of our main markets with some forty hotels, we own almost all of our establishments, large resorts for the most part like the one we have in the Riviera Maya, with more than 3,000 rooms. This makes it one of the largest resorts in the world. Finally, in Europe and the rest of the world, we have about a hundred hotels operated under our brands, under all management methods. All except one hotel in Madrid, for which we have signed an agreement with Blackstone to turn it into a Canopy by Hilton

Could we see your group appear one day in France?

R. G. – This is clearly one of our objectives. I would be more than happy to be in France, the leading tourist country in the world. However, entering this market is complicated. We are in discussions about a small portfolio of hotels in Paris to become their managers. We would love to have hotels in Paris, but the problem in this market is real estate prices and rents. We always try to make sure that our hotels generate good revenues. And in Paris, it’s difficult. It is not the only city: for example, in Madrid, Barcelo was not present until recently, although we are one of the main Spanish groups and we are among the top 30 groups in the world. The opportunities there were not good enough, until we found one.

What are your development objectives outside your original market, Spain?

R. G. – In Germany, we have a hotel in Hamburg and we would also like to have one in Berlin.

in. In this market, we signed an agreement with an owner who went bankrupt before building the hotel. In Poland, we have signed for hotels in Warsaw and Poznan that should open by the end of next year. In Central Europe, where we already have hotels in Budapest and Prague, we will have another one in Lubljana next spring. Finally, we also have a good presence in Morocco as well as in Turkey, with two hotels in Istanbul, and in the Middle East with five properties in Dubai and one in Oman 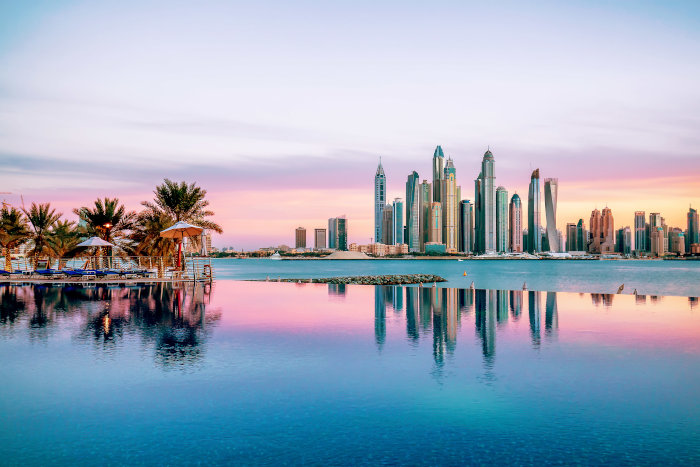 So is your development strategy region by region?

R. G. – We don’t want to have a flagship hotel in each country, but first to develop a critical mass from which to expand a network of hotels. This will also be the case in Sri Lanka and the Maldives where we have signed a partnership with an owner who is developing hotels in these two countries. We have a large project with them in the Maldives in particular. In the coming years, this part of the world will grow faster than Europe, hence our desire to have sufficient size in these markets.

From a single brand, Barcelo, your group has moved towards a multi-brand strategy. Why is this?

R. G. – For a long time we grouped our offer around a single brand, Barcelo, named after the family that created the group. Today we have four brands following the acquisition of Occidental Hotels, a group based in Madrid but whose establishments were all in the Americas. This group had several brands, three of which have been retained: the Royal Hideaway luxury resorts, the upscale Occidental hotels and the Allegro brand in the lifestyle budget segment. Hence the evolution of our offer towards a multi-brand strategy and the passage of some of our Barcelo hotels under one or other of these brands. Depending on the opportunities that present themselves to us and the financial interest that such and such a brand can bring, we will use one or the other in our development.

What to take for a road-trip?

Weekend in Rome: a hell of a program

Hand cream : Protect your hands from the cold